The impending premiere of the new version of the Amazing Stories television show prompts us to take a look back at the original Steven Spielberg – helmed series Amazing Stories, continuing with 1984’s season one, episode six The Amazing Falsworth

Warning:  Spoilers may be ahead. 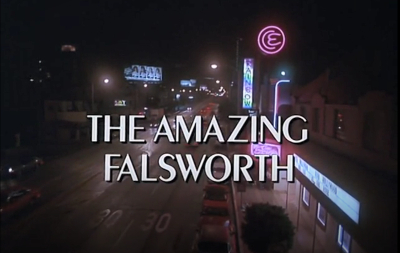 Directed by Peter Hyams, who gave us 2010: The Year We Make Contact, Outland, End of Days…not even he can save us from this terribly telegraphed, untwisted idiot’s plot of a story.

Gregory Hines’ talent is wasted as a night club performing psychic (thanks to Campbell, we have to continue to endure the sad idea that “psychic phenomena” and “paranormal happenings” are considered to be part of the science fiction tableau) who’s touch of an audience member reveals a serial killer.

Idiot’s plot – the term used for a story that would not hang together except for the idiotic choices made by the characters.  We begin this episode watching a club performer nervously walk down an alley she need not walk down;  of course she is strangled to death by the “Keyboard Killer” (he uses piano strings);  we continue to watch in utter fascinated horror as a skid row bum – witness to the murder – runs to a phone booth – IN FULL VIEW OF THE KILLER – to call the police.  Surprise – he’s killed too.

As the police arrive (miraculously with just a couple of seconds of the phone call) the killer enters a night club by the back alley door and takes a seat (with no one wondering why he’s come in the back way;  with no hostess seating him, no waitress taking his “one drink minimum” order) as Hines – The Amazing Falsworth – takes the stage.

I’ll not belabor with more detail:  the killer masquerades as a police officer, luring Farnsworth to his home where all is revealed, there is a struggle and Falsworth manages to prevail, cue another call to the police.

This one is hardly worth the time, though Hines’ performance is pretty good.

Steve finds a fun parody (semi-genre) movie from 1989, the Cannibal Women in the Avocado Jungle of Death. He enjoyed it!

A Drill Built for Mars Will Probe Antarctic Bedrock