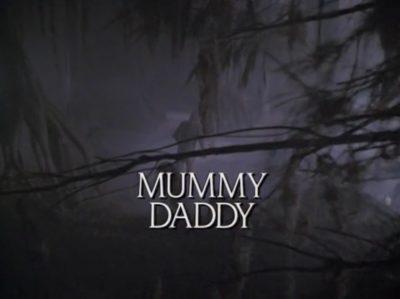 The opening sequence of this episode is perfect – at invoking those B horror flicks so many of us thrilled to watch at 1 am on some UHF channel. It’s shot so iconically that the viewer – at least those familiar with such fare – is drawn right in: a shambling figure stumbles through a shallow swamp, awash in fog and darkness, obviously being pursued.

Our familiarity is shattered when the director yells “Cut!”

Since it’s time for lunch, and since the monster makeup would take too long to remove and replace, the actor playing the titular “Mummy” is encouraged to relax in his trailer, but he soon learns that his wife, who is having their first child, has gone into labor. Typical first time dad, actor/mummy jumps in his car and heads off for the hospital.

He then encounters a series of ham-handedly contrived events – the car runs out of gas, he has forgotten his wallet, a road sign twists in the wind, failing to reveal the proper road to take, flagging down a passing pickup results in a fender-bender – signalling that we are in for a comedic take, rather than a serious one.

Earlier, the film’s director had revealed that he’d chosen this particular swampy location to shoot because it was the actual location where the real mummy that has haunted these parts was last seen.

Take one classic case of mistaken identity (an actor in a mummy suit) and beat in a good dose of the salem witch trials and the classic Twilight Zone The Monsters are Due on Elm Street and you’ll have a pretty good idea of where this one is going: idiot hill people conflate their chickens not laying eggs, there was a strange feeling in the air, cows stopped giving milk and townsfolk took to drinking! A guy running around in bandages MUST be the cause!

I’ve not re-watched the Elm Street episode recently, but I’d be willing to swear on a pile of ankhs that many scenes in this episode are framed as homages to that episode.

There are many character actors in this one we’ve come to associate with “hick” – Brion James, Tracey Walker – and they are well cast; they hardly need dialogue to evoke the kinds of characters they portray.

Our actor and soon to be dad flees the car accident scene – into the swamp (where else?). He then realizes (took him long enough) that its the costume that is causing his most recent troubles, but now he’s lost in the swamp.

Fortunately, he stumbles across a ramshackle home and is invited in by its blind inhabitant (“I’m a friend” – invoking Frankenstein, not to mention Young Frankenstein); but then the blind man realizes the actor is swathed in bandages and he recoils in fear; he reveals some kind of ancient egyptian amulet and then stumbles his way to a sarcophogous, revealing that the legendary mummy that inspired the film being made is, in fact, real.

We’re then run through a series of hijinks modeled on stereotypical monster flick scenes – a graveyard, with grave robbers, the townfolks arguing over how to kill a mummy, slapstick and a lynching scene (where’d the horse come from), complete with a lecture on morality delivered by a school marm; the actor manages to make an escape but, meanwhile, the real mummy has now found its way to the film’s shooting location.

But before that, “mummy daddy” has managed to find the hopsital and the pursuing townsfolk get to witness him being introduced to his newborn daughter; all is forgiven; quick cut back to the film shoot where the picture is wrapped and the real mummy discovers that he may be embarking on a new career….

This was another light episode, one of the madcap humor variety. A regular theme seems to be developing – one of mistaken identities, people out of time – a displaced person narrative.

Mummy Daddy is among the better episodes; while much of the humor was over the top, it remains successful owing to its double-layered nature: not only is the episode itself making fun of such fare, it invites the audience to do so as well by being over the top and drawing on stereotypes.

Of course, wondering why the actor simply doesn’t remove his latex makeup at any point during the episode (and there are numerous times when he could have done so), will take you right out of the story.

But maybe that’s what the producers are trying to get to with this show; relax, don’t question things too much and we’ll tell you a story you won’t mind having heard.

Joe Abercrombie’s A Little Hatred: A Book at War With Its Past

Looking back at the best sf the anime world had to offer in 2018.

Spider-Man – Into the Spider-Verse Review: