The impending premiere of the new version of the Amazing Stories television show prompts us to take a look back at the original Steven Spielberg – helmed series, beginning with 1984’s season one, episode one Ghost Train

Today we’re launching an on-going series of retro-reviews as we take a look at the original Amazing Stories television show that aired across the 1985 and 1986 seasons on NBC.  Executive Produced by none other that Hollywood’s science fiction impressario, Steven Spielberg and featuring scripts and direction from some of tinsel town’s hottest (1980s) talents. 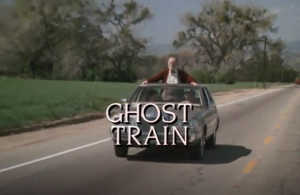 Though I did not own the magazine at the time this show aired, I was very keen to watch it;  Spielberg had delivered some movie magic in my wheelhouse and I was eager to see what he did with the unprecedented deal he’d negotiated with NBC, because, of course, I was well-familiar with Amazing Stories, the magazine, the things that had transpired since its debut in 1926 and because it was the first “Outer Limits” like episodic SF show to be offered for quite some time;  in the mid-80s, we were starving for good science fiction fare on the small tube; Star Trek’s Next Gen wouldn’t air for a couple of years and what had been offered up to that point was…not really science fiction so much as it was skiffy.

Regardless, I must say I was a bit shocked to discover that the premiere episode – the one designed to make families get together around the camp fire for story time – was not science fiction, but “horror” of the light variety.

The thing that really shocked me though is – 80s television.  OMG I’d forgotten how much camera angles, shot framing, lighting and all the rest have changed over the years!

The story itself is a relatively simple and familiar one:  a character’s past actions have haunted them their entire lives, and now they are going to pay.

Roberts Blossom, who plays the fated character Old Pa gives a credible performance;  you may remember him from Close Encounters of the Third Kind, where he plays one of the UFO watchers on the hiway; you may also remember Lukas Haas as the child actor from the film Witness.  These two get the most screen time together and, while their interaction is off at times, in large measure they pull off the grandpa-grandson relationship pretty well.  Sometimes it seems a little over-wrought – meaning to tug heart strings but not quite doing so.

This is understandable and at the same time probably one of the factors that led to the show being cancelled after only two seasons:  the intended target audience was “the family”;  few such shows manage to strike the fine balance necessary to appeal to such an amorphous demographic;  you don’t want the gore and the cursing associated with “adult” horror;  you don’t want Barney the Dinosaur level sweetness and safety, so you end up with something that’s not quite on for either.

This was the season opener and in many ways set the stage for what was to come;  tales that are more allegory and fable than they are “science fiction”.  But it did show some promise, with acting ranging from pretty darned good (Blossom) to occassionally good (Haas) to marginally acceptable (most of the rest of the cast);  the story itself a mix of the old horror trope – Old Pa caused a train accident that killed everyone aboard;  waiting to board the late night special he fell asleep across the tracks and in trying to avoid running him over, the engineer ended up derailing the train.  He’s been paying a price of guilt and shame ever since, but now the train is coming to collect him and he can finally be at peace.  (Though I do wonder why, in one of the final scenes, all of the passengers on the ghost train seem happy to meet the person responsible for their deaths…);  it is also, I suppose, a take on familial love, of how children can still believe fantastical things that maturity blots out, sometimes preventing them from seeing reality (the lesson being – don’t dismiss what crazy things your kids – or doddering old codgers – tell you out of hand, there might be a kernal of truth in there.

The story does suffer a bit by being constrained to only an hour and on the small screen; some scenes seem rushed, even as they present television viewers with a level of cinematography unusual for its day.

All in all this very first episode of Amazing Stories probably deserved its mostly negative reception, while, oddly, also encouraging viewers to see what would come next;  it achieved its goal of enticing viewers to the series, even if this particular story did not quite live up to expectations.