Well, the cover date printed on magazines used to be the date after which an issue was to be removed from the news stands and magazine racks that one used to be able to find just about everywhere – the bookstore, the pharmacy, the train and bus stations, hardware stores, supermarkets, five-and-dimes (? – look them up), toy stores…just about anywhere enterprising magazine distributors (? – look them up) could convince an indie store owner (? – look them up) to put up a spinner rack – and, at the end of April, anything with an April cover date was removed, just as the first issue of Amazing Stories would have been removed.

But like so much of true history, the details have been lost, forgotten obscured and over-written, such that these days most everyone thinks that a magazine with a cover date of April was put ON the stands in April, not sometime in the middle of March. 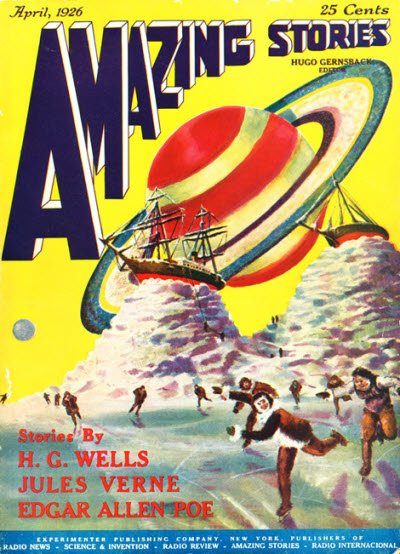 That’s right, boys and girls and they’s, if you had a time machine (as several SF authors apparently posses) and went back to March 15th, 1926, and just happened to find yourself in front of a newsstand or inside a candy and/or tobacco shop, there’s a very good chance that staring back at you would be a copy of Amazing Stories Volum1 1, Number 1, April 1926.

Don’t let that trip you up.  It’s not an alternate time line, it’s just the way they did things back then.

(Please don’t pick up a copy and bring it back with you:  a slew of near mint copies of this issue would upset the collectibles apple cart.)

(If you do have a working time machine, please reach out;  we’ve got numerous projects of a lucrative and historical value nature we know you’ll be interested in participating in.)