News? We don’t need no stinkin news. We want badges!

Calls For Positive Future Depicted in SF
Changing the Way We Look At Women (Gallery) (I use my eyes but I don’t think that’s what they are referring to….)
On Space Women
On Fighting Women
Hope For STEM For Women: 2.5 Year Old Delilah Gushes Over COSMOS (video)
Ellen Klages – Nebula Toastmaster Fred D. Bammer, Member Of First Fandom, Dead At 88
Photos From Larry Tucker’s Memorial
Steamcon Cancelled
Can of Worms: What Can Replace Star Trek?
Captain Video Is Dead (Now You KNOW the Era Has Passed)
Another APA Going Down?
SFFWRTCHT To Cease

Compton Crook Award Nominees (Daniel M. Kimmel, a contributor here, is up for Shhh, It’s A Secret)
The Retro Hugos  (I Want Future Hugos:  Nominate Works That Will Win 25, 50, 75 and 100 Years From Now)
Make Recommendations For the Chesley Awards Lets Send Dryer Sheets To Mars:  Flat, fluttery landers
Saturn’s Children:  NASA Photo Gallery
James Webb Space Telescope (Can’t Wait!)
NASA One Ups COSMOS CGI With the Real Deal (gallery)
3D Map Of the Universe Is so Awesome, You Don’t Even Have To Click the Link To Watch It

If you celebrate the holiday, I hope you have a great St. Patrick’s Day tomorrow! May it be a lucky holiday for you!

Speaking of luck, Goodreads has a wonderful section called “Giveaways” that offers readers a chance to win free books from authors! More than 2,500 titles are listed in this section, and just about every genre is represented. Here is the Giveaways link: https://www.goodreads.com/giveaway

I’ve participated in these free book contests for years now (my book is currently listed there at this link: https://www.goodreads.com/giveaway/sh…), and I have nothing but positive things to say about how it is run.

If you enter a contest (who doesn’t like free books?), I hope your name is selected!

‘BLOOD COUSINS’ – A FILM OF COMEDY, TERROR AND REVENGE

The award winning comedy troupe and band of filmmakers, Comedia A Go-Go, are proud to announce the online distribution of their first feature movie, Blood Cousins. After select theatrical and film festival screenings filled with laughs and gasps, Comedia A Go-Go is excited to expand their audience for their comedic horror/revenge film. Blood Cousins is now available for instant streaming and HD downloads at www.bloodcousinsmovie.com

We hope you and your team would consider viewing our work for potential coverage and/or review at your convenience. Included in this email is access to our online screener of the movie, web links, stills and basic information. Feel free to contact me with any questions or additional material.
Thank you very much,

SYNOPSIS
On the anniversary of their grandmother’s death, four cousins, as close as brothers, reconnect on a road trip to the Texas Rio Grande Valley to pay respects to the woman who helped raise them. Hidden beneath their friendship, the truth of their childhood surfaces to reveal a darkness in the family that won’t stop until the cousin’s lives are changed forever.
Blending comedy, Mexican folklore and terror, Blood Cousins puts a new spin on revenge films and defines the word,’retribution’.

MAKING OF
Comedia A Go-Go got their start doing live and video sketch comedy, and after years of award winning short projects, they have finally ventured into feature films with Blood Cousins. Developed by key CAGG members Regan Arevalos, Jess Castro and Larry Garza and co-produced by cinematographer, Brent W. Graham, Blood Cousins serves as the team’s deranged love letter to their hometown of San Antonio and South Texas – all while blending comedy, drama and horror.

Confluence is returning to Mars (PA) at the Four Points by Sheraton, Pittsburgh North.
It’s a small con, combining varied program and loads of filk, held just 20 miles north of Pittsburgh.
In addition to Bill and Scott, Pete Grubbs is our Featured Filk Guest Emeritus and Moss Bliss is
our Special Filk Guest (sponsored by the Pittsburgh Filk Underwriters).  We’ll be announcing
panelists at our Website shortly.
We’ve also revived the Short Story Contest – http://parsecink.com/contest/
Submissions close on April 30, 2014.
For more information, visit our Website  http://www.confluence-sff.org/ or download
the latest flyer:
***
Hi ,

You’d think it would be old hat by now, but Brian Herbert and I still get excited with the release of each new book. Mentats of Dune—our thirteenth Dune novel—goes on sale today at your favorite booksellers in the US and UK. It’s been two years sinceSisterhood of Dune. Mentats picks up the story of the formation of the great schools (the Mentats, Bene Gesserit Sisterhood, Navigators, and Swordmasters), the formation of the Imperium, and humanity’s struggles against extremists who want to send civilization plummeting back to the dark ages.

Brian and I usually go on a traditional book-signing tour for our new Dune novels, but this time we’re launching Mentats of Dune at Emerald City Comic Con in Seattle (March 28–30), a pop culture expo expecting over 80,000 attendees. We’ll both be there signing autographs and meeting fans all weekend. Stop by to see us at our table.

At Emerald City, I’ll also be debuting the first issue of the marvelous BOOM! Studios graphic novel adaptation of my steampunk fantasy Clockwork Angels (based on the concept album by rock legends Rush). It’ll be six issues, scripted by me working with Neil Peart, art by Nick Robles.

To spread the word about Mentats of Dune and Clockwork Angels—not to mention several other novel releases—I’ll be appearing at a lot of large pop culture shows between now and September. We’ll be adding more, but here are some of the places you can find me

We’ll have a big table in the dealer’s room at each show, so come and see us.

Finally, if you’re looking for a bargain, or to discover new authors, buy yourself the Truly Epic Fantasy Bundle, featuring 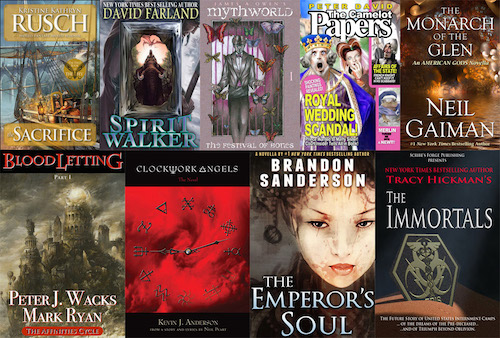 Name your own price at storybundle.com and get a batch of books for as little as $3 (worldwide). The special only runs ~2 more weeks, so grab your bundle now.

Until next time, keep reading!

P.S. Brian and I just finished and delivered Hellhole Inferno, the grand finale of the Hellhole trilogy, and soon we’ll brainstorm our next Dune book, Navigators of Dune. Hope you’re getting started on Mentats.

Clarion West at ECCC: How You Can Help

Clarion West is going to be at Emerald City Comicon, March 28-30, and we need your help! We want to showcase the many and varied talents of Clarion West graduates at our table.

If you are an alumnus, we would love to feature promotional materials for your books, podcasts, or stories at the Clarion West table. Please contact Tod McCoy at todmccoy@gmail.com if you would like to donate promo materials (postcards, bookmarks, and the like). You can send them to us in the mail, or we can arrange a drop off time and location for those in or near Seattle.

If you are coming to ECCC, stop by and say hello!

The staff and volunteers of Clarion West have been working hard to bring you a new site with a revamped look and organization that will make it easier to find information about Clarion West’s mission, workshops, events, and fundraising.

Detroit, MI – Detcon1, the 2014 North American Science Fiction
Convention, announces that some pre-registration rates will go up on
April 1, 2014.

Direct press queries or requests to be removed from the Detcon 1 Press
Release Mailing List should be sent to press@detcon1.org

Inquiries regarding the convention can be directed to Detcon1 Chair,
Tammy Coxen, chair@detcon1.org or 734-276-3215.

Detcon1 is being held July 17 through 20, 2014, at the Renaissance
Center Marriott in downtown Detroit, Michigan.

—
This is a moderated, announce-only list for news about volunteer-run
genre conventions.  See http://con-talk.org/ for more information.

To ISBN, or Not to ISBN?

Sci-Fi Experimental Short Film: “Until There Was Nothing” |DUST

OpenAI Wants to Make Safe AI, but That May Be an Impossible Task