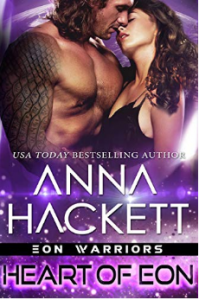 This week I’ve got all kinds of new science fiction romance to offer you!

Genius computer geek Wren Traynor prefers her high-tech comp lab to socializing with people, and she definitely prefers it over crawling through the bowels of the huge Eon warship she’s hijacked. When Earth’s Space Corps blackmails her into this deadly mission, Wren will do anything to help her beloved sisters and save the Earth from invasion by the insectoid Kantos aliens. That includes entering into a dangerous game of cat and mouse with the tall, hunky, and seriously enraged Eon war commander who captains the Rengard.

War Commander Malax Dann-Jad is a born protector and has forged a successful career in service to the Eon Empire. Haunted by an early mission where he lost good warriors, he’s dedicated to protecting his ship and its crew. Especially since his warship is carrying a special, top-secret cargo. But one tiny, infuriating Terran puts all that at risk when she commandeers his ship and refuses to listen to reason.

When the ravenous Kantos set their sights on the Rengard–using sneaky, underhanded tactics–Malax finds himself with an armful of curvy woman. He and Wren must join forces to fight back, and are shocked at their improbable, intense attraction. But with lives at risk, both will learn that strength comes in more ways than one and love can hit when you least expect it, and that in order to survive, you have to put everything on the line. 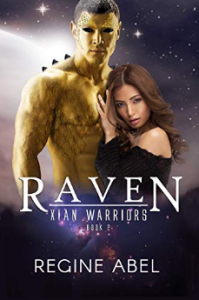 Another author I always one-click is Regine Abel, who spins a complicated tale in Raven (Xian Warriors Book 2). The details: Her beautiful mind was her own prison.

After betrayal and abuse destroyed Liena’s dreams of becoming a Psychic Operator, she warily accepts a temporary position on Khepri, the homeworld of the bioengineered Xian Warriors. With entire Warrior units getting mysteriously wiped out, she must help devise a critical antidote. But when a buck naked, sexy as sin, Xian Warrior walks into her lab, Liena’s bone-deep fear of psychic contact, of touching another’s soul, doesn’t trigger with him.

The minute Raven sees Liena’s aura, he knows he has found the one. She’s broken, but he vows to fix her, and then claim her as his bonded mate. When she inadvertently sets them on the path to discovering, at long last, the human’s elusive third psychic ability, the need to mend her becomes urgent. As the strongest of her kind, she may be their only hope of saving an entire species on the verge of annihilation.

With time ticking and so many lives in the balance, will Liena overcome her trauma, or will her mind and the rescue mission descend into madness? 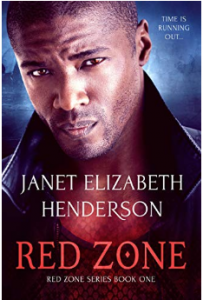 The cyberpunk aspects of Red Zone by Janet Elizabeth Henderson intrigued me. Here’s the story: Welcome to the new world. Things have changed just a bit. Big Brother’s not only monitoring important things like what toilet paper you buy–it now has direct access to everything you see thanks to the mandatory implant you get at birth. And Friday Jones has seen something she wishes she hadn’t.

Now she has all kinds of undesirables after her–some to straight up kill her and others who want to steal what’s locked in her head. So, she’ll need the help of a ruthless mercenary, Striker, if she has any chance at survival. That he’s a jerk, who she wants to punch in the face, well…a dying woman sometimes has to make tough choices.

Striker’s special abilities have kept him in the shadows for a reason. He has no interest in getting mixed up with the smart-mouthed, hard-headed woman no matter how his body reacts. But then he discovers what’s in her head and all bets are off. 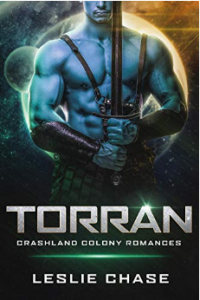 I loved Auric, the first book in Leslie Chase’s Crashland Colony series so I was excited to see Torran, the second entry. Author Chase managed to put some good spin on the classic tropes of the aliens needing brides and the subject of starting a colony.  Here’s the blurb for the new book: Stranded on the wrong planet, captured by brutal alien raiders, the only good thing about Lisa’s situation is Torran. He’s a dangerous alien warrior – who also happens to be the hottest man she’s ever met. Strong, protective, and lethal, he’s everything she could want or need.

Perhaps she shouldn’t have shot him on sight?

Torran is used to surviving alone on alien planets, but this time he has others to protect. Another complication is the human captives. One human in particular. The female fate has infuriatingly chosen for him, the one he is now compelled to do anything for.

He’ll just have to overlook the fact that she tried to kill him.

When the alien leaders threaten to kill Lisa and her family, Torran has to choose between his own people and his mate. But even if he can get Lisa to another human settlement, will he be welcome there? Or will the humans’ fear of him drive them apart? 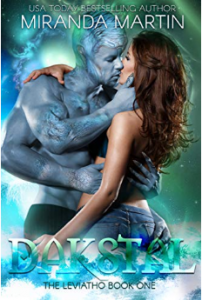 For a very alien alien, there’s  the multi-armed hero of Dakstal (The Leviatho Book 1) by USA Today Best Selling author Miranda Martin. The blurb: Space. My home, my dream….

Well, it was, but not like this. My fantasies of daring space adventure on a cutting edge Explorer are reduced to the yawnfest of jockeying a mining cargo ship back and forth from the asteroids to Earth. It’s not the life of excitement I dreamed of as a little girl. That is until I make first contact.

He’s jacked. Like really big and he has four arms, scales and fins. A real life merman! I’m going to be the most famous pilot in all of history for discovering these guys.

My delusions of grandeur meet a quick end because as it turns out the Leviatho are on the run. The last of their race come seeking sanctuary on Earth from the Kriall, the enemies that are trying to destroy them. When the xenocidal maniacs show up, every person on Earth is in danger and it’s going to be up to us to save them, whether Earth wants us to or not. 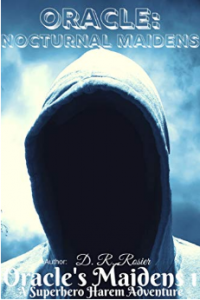 Superhero tales find a natural home in SFR and Oracle: Nocturnal Maidens: An Oracle’s Maidens Novel 01 by D. R. Rosier offers more than one. The story: Bill Callahan, columnist, blogger, superhero, is Oracle. It isn’t easy being a hero, especially a D-Class one with a single power. Seeing the future was a huge edge, even for an otherwise normal human, but he still had to carefully choose his battles.

As if being a superhero dealing with more powerful villains wasn’t hard enough, he also had to avoid the Nocturnal Maidens, the premiere superheroine team in the city. They really didn’t like him, at all. He had no idea what he’d done, but they seemed to despise him, and hold him in contempt.

He was alone, fought alone, lived alone, and with his double life had very few friends and none of them close. His life was about to change, significantly, if he could survive… 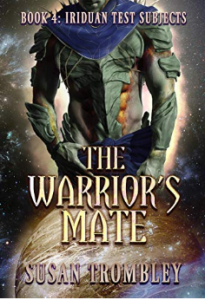 The Warrior’s Mate (iriduan Test Subjects Book 4) by Susan Trombley, goes even farther afield for her alien her, as shown by the cover art. The blurb: Five years ago, I was abducted by aliens….

After a harrowing escape from an alien research facility, I found myself in the care and protection of an alien species called the Akrellians, but I didn’t trust my instantaneous attraction to the commander of the ship. After all, I had no idea what the evil Iriduans had done to me, so I didn’t know if my feelings were even my own or something they had caused.

He was reptilian and had deadly quills. How could a human possibly fall so fast for such an alien male?

When I offered Prime Commander Tirel a temporary sexual liaison, hoping it would ease the need I felt for him, he rejected it and asked for something more permanent.

I couldn’t escape him fast enough. Not because I feared him, but because of the temptation he offered—one that would require me to sacrifice everything I’ve ever known to stay with him.

Now, after years apart, the strange bond that had formed between us upon our first meeting demands I return to him, and I realize that I can’t continue to live my life without him. The only problem—I’m stuck on Earth, and I don’t know how to find him again.

Until an unexpected visitor brings me the solution—and the terrifying news that I may have waited too long. 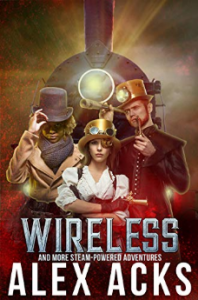 Steampunk remains alive and well and Wireless and More Steam-Powered Adventures (The Adventures of the Valiant Captain Ramos and Her Crew Book 2) by Alex Acks is our title for this month. The blurb: Captain Marta Ramos, the most dangerous pirate in the Duchy of Denver, is back and she and Simms are up to their goggles in trouble. Has General del Toro found a way to use the Infected as an army and can Captain Ramos work with her arch enemy, Colonel Geoffrey Douglas, to stop him? Can Simms join forces with the devious Deliah Nimowitz on a jailbreak, some sewer misadventures AND a high society soiree involving tea, a heist and sausages? And what about the Rail King and his nefarious plans? Can Captain Ramos and her crew stop him before he completes his latest dastardly deed, one that may result in Deliah’s demise?

Happy reading and I’ll bring you more SFR titles to consider in May!

In this week’s viewing: Beatless is too weird for Amazon to handle, another show has gone mysteriously silent, and more!

The Best Hugo Award Judge Around.