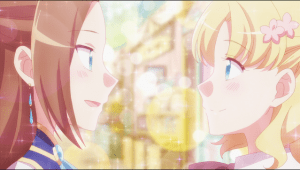 My Next Life as a Villainess: All Routes Lead to Doom! season 2 premiere – Reborn in as the villain in the world of a computer game she used to play, Katarina Claes avoided all the horrible fates available to her. Now she has to figure out what to do with the rest of her life, which only holds perils like being surrounded by a circle of slightly too enthusiastic friends and having to marry a prince.

This episode feels a bit at loose ends too. The biggest thing that happens in it is a school festival of the sort that happens everywhere in Japan, because nobody even tries to keep their generic vaguely medieval fantasy worlds even vaguely medieval anymore. Most of the runtime is taken up with reminders that every major character has a massive crush on Katarina along with varying degrees of jealousy. Some brand-new people are introduced but bring no obvious complications with them.

Season 1 of this show was a light, mostly harmless look at someone desperately trying to escape her ordained fate. It did its job, and this premiere does not manage to sell the idea that we need more stories about her. I don’t feel like there’s any reason to stick around. 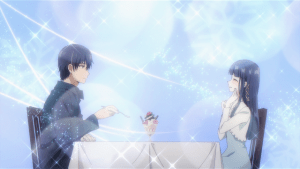 The Honor at Magic High School premiere – Shiba Miyuki is a girl with immense magical talent, about to enter the most prestigious magic high school in Japan at the head of her class. But what really matters to her is the attention of her brother Tatsuya.

This is a retelling of The Irregular at Magic High School, which burst on the scene with its anime adaptation all the way back in 2014, before light novels were all about being reincarnated in fantasy worlds but where the trope of apparent losers turning out to be the awesomest dudes was already well-established. It followed Tatsuya as he used his secret technomagical genius to defeat all sorts of threats.

The Honor at Magic High School (not Honor Student as originally reported, I guess the licensor absolutely insisted on this wording) is an adaptation of a manga retelling the story, only for people who’d like it to be all from Miyuki’s perspective and focused on just how romantically obsessed she is with her twin brother. While there is some brief business about an enhanced mage going rogue, 90% of this episode is Miyuki reflecting how much she loves Tatsuya, squeeing at the opportunity to think of the two of them as a couple, displaying herself in her underwear and then being unhappy she can’t get him to ogle her more, and so forth.

If you’re not up for a bunch of warmed-over light novel tropes slathered in a thick layer of incest, this may not be the show for you. 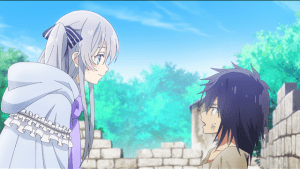 Seirei Gensouki: Spirit Chronicles premiere – Amakawa Haruto has a particularly dramatic exit from Japan and into his next life in a fantasy world, as the entire bus he was on gets crushed by a train. He’s reborn in the slums of Generic Medieval-ish Capital as a boy named Rio. Rio’s life takes a dramatic turn one day, though, when he is revealed to have an incredible level of magic, and his abusive gang buddies turn out to be the ones who kidnapped a princess, allowing him to be a hero by releasing her.

Of all the portal fantasies this week, Seirei Gensouki stands out for making the most use of idiot plotting. All sorts of complications arise simply because people don’t know basic things about their own world, or don’t ask obvious questions, or keep cutting each other off in the middle of important sentences. The intention appears to be to arrange for Rio to look wronged, so that then he can be sympathetic enough for viewers to cheer his rise.

There is really nothing new here; don’t bother. 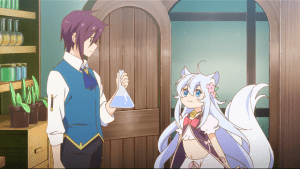 Drug Store in Another World: The Slow Life of a Cheat Pharmacist premiere – Reiji is yet another guy from Japan reincarned in Generic Fantasyland (at least we’re spared the details this time), but instead of becoming a mighty hero, he’s a clever alchemist who makes all sorts of potions to help people out.  Assisted by a ghost and a werewolf with the personality of a large, friendly dog, he’s able to brew something up to assist with any challenge.

This is absolutely the best portal fantasy premiere this week, and boy is that not saying much. It’s a gentle, well-meaning show about people with mild problems finding solutions to them. On the animation front, it’s doing the very best it can with obviously limited resources.

On the other hand, it’s still the sort of show that has no problem dressing a young girl in a weird frilly combo of lingerie and… school uniform maybe?, spends the back half of the episode in a story about a literally crazy girlfriend, and is set in the very same overused, underimagined RPG-like world as practically every other portal fantasy in modern anime. So maybe skip this one too. 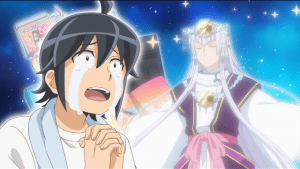 Tsukimichi -Moonlit Fantasy- premiere – Misumi Makoto’s parents came to Earth from another world, and as a condition of the bargain that brought them, he now has to travel to their world. It doesn’t look so bad at first, with one of the chief deities of the Shinto pantheon shepherding him over and the promise of a hero’s life, but the other world’s goddess takes one look at him and boots him off into the wastelands instead.

There are seeds of a good comedy here about an underdog grappling with not getting the power fantasy every light novel in the last decade promised him, but Tsukimichi has no idea how to cultivate them. Before the big twist, it’s too eager to explain the joke, and afterward, Makoto’s life is still too easy. He’s got the usual super-endurance and magic power, he finds someone to teach him magic in almost no time, and the process is incredibly easy. After that, an ancient dragon becomes his minion and takes the form of a buxom young woman. In the end, the story is everything it wanted to appear not to be. 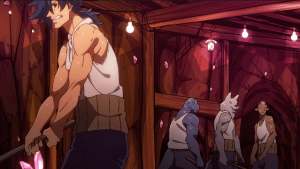 The Dungeon of Black Company premiere – One minute, Ninomiya Kenji is gloating about how his l33t day-trading skillz have allowed him to live a life of idle luxury while all the normies have to go to work in a typhoon, and the next, he’s been whisked off to a fantasy world where he rapidly falls to the bottom of the heap and is stuck working horrible hours in a magic crystal mine. Undaunted, he plans to find a way to cheat his way back to the top.

This one gets a little closer to the comedy mark than Tsukimichi. The protagonist is sufficiently awful that you won’t mind watching him fail over and over again, and there’s some room in the setup for pointed social satire. (“Black company” is a translation of a Japanese term for a company with abusive and/or illegal labor practices.) But it forgets to give him some spark of sympathy to keep viewers rooting for him a little, and the setting is still the exact same generic vaguely RPG-inspired fantasy world that we’ve already seen twenty times this year. At this point it will take something truly brilliant to rise above the tediousness of that setting, and this is not it. 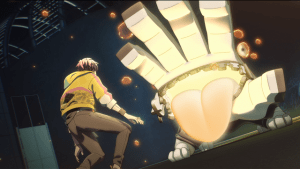 D_Cide Traumerei premiere – Ryūhei is a fairly normal, well-adjusted teenager, so when he is first bitten by a strange animal and then finds himself fighting monsters in a dream, he forgets all about it quickly. But then he comes across a strange portal, finds his dream bleeding into reality, and learns that he is one of the chosen few with the power to fight monsters.

Yup, so, all pretty standard for a show based on a video game (or in this case a co-release with one). It’s not terrible, the personal powers are a bit more creative than average (one guy, for instance, appears to be fighting with ice skates), and the monsters are inspiredly weird. On the other hand, this is CGI and looks very CGI-y, and the special folks who can battle the monsters are called… “Knockers-up”. Really.

D_Cide Traumerei was advertised as being inspired by the Cthulhu mythos, but there is no sign of it here. It’s not just the absence of any specific mythos references, but the whole idea that you can punch the monsters until they go away is hardly in keeping with the Lovecraftian spirit. There’s nothing much to see here, so let’s move along. 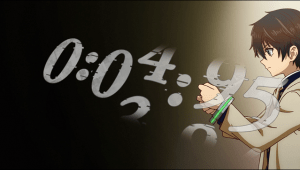 Battle Game in 5 Seconds premiere – Shiroyanagi Akira lives to game. He hates school and likes nothing more than a new challenge. And yet, when he is made legally dead, given an amazing new power, and placed in a battle royale to test him against lots of other people with varied new superpowers, he is somehow ungrateful for the opportunity and immediately begins plotting to escape.

Akira’s fellow prisoners include a whole lot of standard anime character types, starting with the unfortunate mook who is his first opponent. But this story does have one interesting idea, which is the nature of Akira’s power. It’s the sort of multivalent ability which is normally restricted to villains, but using it properly will poses a big challenge for him in every single fight.

It’s not a whole lot to go on, but this season, that’s enough for at least a second look.

Here’s the point where we normally turn away from the premieres and look at second episodes and continuing shows to pick a lineup. But the premieres are going to keep coming in dribs and drabs for the rest of the month, so we’ll have a mix next week: more premieres, a catch-up on Welcome to Demon School, and the second episodes of Higurashi: When They Cry – SOTSU, Peach Boy Riverside, and The Case Study of Vanitas.

(The game’s) unvoiced goal is to revive the old days of role playing games. As much as it can, it attempts to cop the vibe of classic titles like Baldur’s Gate and Planescape: Torment, Dungeons and Dragons based properties