In this week’s viewing: Wrapping up the season with three shows and no endings. 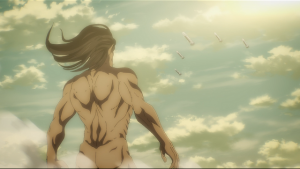 Attack on Titan season finale – With the Marleyan Volunteers and the Jaegerists nearly in control, but with their plan near failure after what just happened to Zeke, what could make the situation worse? The remaining Titans turning up for a showdown with Eren, that’s what.

For a few minutes there, it looks like Eren has won another unlikely ally, but Pieck turns out to still be loyal to Marley. It’s easy to believe she wants to change sides because her justification for it is true. The minute the Eldians stop being useful to Marley, something unpleasant is unlikely to happen to them. Perhaps she thinks that capturing the Founding Titan can extend their usefulness.

In addition to all the competing factions we know about, another force enters the picture when a Titan arrives to save (or something) Zeke. There’s also a brief comment that Zeke’s power of using his spinal fluid to control others is new. That explains why Ksaver said the Beast Titan was useless— either no one knew about this power, or Zeke and/or Ksaver somehow developed it themselves.

And on the oppression front, Attack on Titan continues to display an impressive understanding of how it perpetuates itself. Pyxis makes the observation that the Marleyans have learned very well from their masters, in adopting a colored system of armbands.

So how much longer does the cycle continue? What other tricks does Zeke have up his sleeve? How many more Titans will Eren absorb? All these answers will have to wait for the newly announced Attack on Titan The Final Season Part 2, coming not soon at all in January 2022. When we finally get the conclusion, this series should be one for the ages. 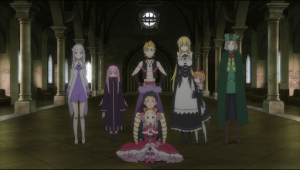 Re:ZERO -Starting Life in Another World- season finale – Beatrice, Emilia, and Subaru working together are able to finally eliminate the rabbity menace, and with that, Subaru has won. Not only that, Roswaal was so sure of victory that he has committed a bonus self-own that will mostly keep him out of Subaru’s hair in the future. Not only that, but things have settled down so much that there’s time to hold a big fancy party in honor of Subaru getting officially appointed as a knight in Emilia’s service.

There are a lot of threads left dangling for future seasons. Roswaal will no doubt be working just at the limits of his geas to cause trouble in the future, so long as he still wants to resurrect Echidna. There are those briefly-seen badguys from early in the first half of the season, and Pandora from more recently. Plus, somewhere out there is a third legendary magical beast that Subaru will no doubt have to defeat at some point.

But for now, he deserves his party. After all the darkness in the first half, he has earned this happy ending. Even if it isn’t really an ending, and there’s bound to be plenty more darkness ahead.

Still recommendable, with a warning about the amount of talking in any given episode. 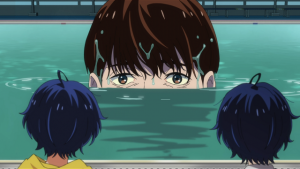 Wonder Egg Priority #12 – After being warned about what happened in Momoe’s and Rika’s final battles, Ai faces her own. Forewarned, she’s able to save Leon. And the egg girl who helps her through the final steps to acceptance is… herself.

Back to the parallel-worlds idea we go, in this case showing what would have happened had Koito never come into Ai’s life. And then Ai declares that she not only wants to be a warrior for love, she’s going to travel to the other timeline and save herself. Is that perhaps how Acca wants to save Himari? Finding her in another universe?

Ai’s triumph is truly a great moment, but let’s talk about the less-great side of this episode. Although Wonder Egg Priority clearly means to be supportive of its teenage girls, it’s never quite managed to disguise that it was created by men. And here we are, near the end, with a boss villain who’s a teenage temptress, and the narrative bending over backwards to convince us that the guy who’s been coming across as a boundary-pushing creep for the whole series is just tragically misunderstood.

There’s one more episode to go, thanks to the production delays that turned episode 8 into a clip show. It won’t be airing until the end of June, so the creative forces behind this show will have a good long time to think about what the heck they’re really doing.

A big stack of first looks this week, and then it’ll be time to make decisions about what to add for the regular weekly commentary. Those of you worried about the absence of Attack on Titan, fear not– there have just been announcements that it’ll be streaming at both Crunchyroll and FUNimation, and I’ll have […]

Kimberly Unger dives into her first post about science fiction in video games with a look at Anthem from Bioware, an MMO based on the concept of terraforming.