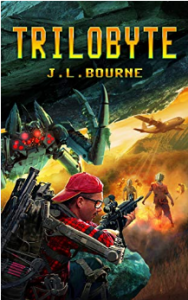 I couldn’t resist the science fiction novel Trilobyte once I read the concept and was delighted to have the opportunity to interview author J. L. Bourne about his influences and certain plot details (but with no spoilers).

The blurb: The machines brought society to its knees. Now, the last remaining humans fight for survival—and to take back what’s theirs.

Junior, a robotics expert, tinkers quietly underground. With dozens of machine kills under his belt, he knows the enemy inside and out. Alpha0verride, a reclusive black hat hacker, uses the skills acquired over a life of shady activity to outwit the hyper-intelligent machines swarming in on her. Brick, a special forces operator and one of the few Pentagon survivors, fights his inner demons to embark on the most important mission of his life.

Together they are humanity’s last, best hope—if they can only find each other in time.

JLB: As a Gen Xer that grew up in the 1980s, ‘The Terminator’ (1984) is in the category of major influences. The way the machines relentlessly pursued their targets captivated me as a young kid. Although there are no Terminators in Trilobyte, that same drive and determination are programmed into my machines. Another influence in my writing career is Michael Crichton. Who wasn’t captivated by his Jurassic Park or Andromeda Strain? The way he wrote realistic and believable science fiction will forever be an influence of mine, and Robert A. Heinlein falls into that category as well with his young adult novels.

ASM.: I was also reminded of the screamers in the novella “Second Variety” by Philip K. Dick (1953) as well when I read the book, especially when it came to the way the trilobytes create more of themselves including scary but logical enhancements. If you didn’t discuss it above, what inspired you to add the character of the bear? (I loved the bear – so unexpected.)

JLB: I’ve always liked sidekicks in stories. Sometimes when you are writing a post-apocalyptic novel about a lone survivor, it helps to have something, even if symbolic, that stands with our protagonist to help them along.

JLB: Alpha0verride, for sure. I had to research the black hat (hacker) subculture and think about what she might be like if she existed in this machine world. What did she sound like? What was her personality alignment? Things like that.

ASM. : I felt you did right by Alpha0verride. I admired her panache and smarts, and determination. How did you write those complex battle scenes, by which I mean, did you diagram it all out ahead or do you just get into the flow and write it out or?

JLB: Battle scenes were “on the fly” or pants writing as some of us call it. Once I establish to the reader the basic capabilities and limitations of the machines, then the battle scenes play out much more logically. There is a large machine in Trilobyte that possesses capabilities that the reader doesn’t know about until much later.

ASM.: Might we see even more “evolved” trilos in the next book? Any hints?

JLB: We will definitely see new machines in the next book. We get to really know and understand one of them in particular. A Breacher eradicator designed to rip doors from military bunkers plays a major, but an unexpected role.

ASM.: Who is your cover artist? If you do the covers yourself, can you share a bit of your process with our readers?

JLB: My cover artist is the great Sam Kennedy. Sam and I get on the phone and talk about what the covers might look like based on the storylines and major plot turns.

ASM.: Have you binged any good TV series or movies lately?

JLB: ‘Alone’, ‘Forged in Fire’, and ‘The Expanse’. It’s getting more difficult to find TV content that is worth my time lately. These make the cut.

JLB: I need to catch up on a few titles written by authors in my writer’s guild, Phalanx Press.

For more about J. L. Bourne and his books visit http://jlbourne.com/