In this week’s viewing: Two finales and one that should have been. 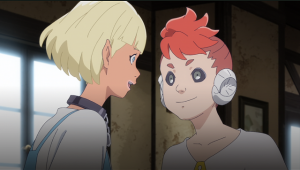 Listeners finale – Echo does his best, reaches out to Mu, and together they wind up reopening the gate, and letting the Earless flood through. Suddenly it isn’t about music anymore, but about learning to live together despite differences for a richer world.

The real point becomes obvious when Denka uses the word “immigrants”. Japan is notoriously xenophobic about immigration, even for this day and age, and in that light, the finale is a clear statement that the country can only gain by getting over itself and opening its doors to the world. The malevolent appearance of the Earless comes from seeing them only partially manifested; letting them through the gate lets humanity see them as full people.

So in the end, we have a new entry in the grand sf tradition of well-meaning stories about diversity and tolerance that wind up representing minority groups as literal non-humans. At least this one doesn’t try to match the aliens up with any specific group, and there’s all the fun music and the general weirdness to enjoy along the way. This probably won’t be one of my top shows of the year, it’s not a tragedy to miss it, but I can recommend it as a feel-good show. 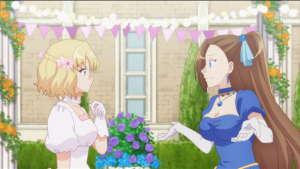 My Next Life as a Villainess: All Routes Lead to Doom! finale – Catarina powers through her final challenge by overwhelming Sirius, or rather Raphael with niceness and the spoilers she suddenly remembers from her previous life. After that, she can only wait for the conclusion of the game. Which route has Maria taken? One that’s a complete surprise to Catarina, because she’s still kind of an idiot.

As I’ve said before, romcom logic dictates that Maria has to fall for Catarina, and indeed she does. And then the show immediately backs away from that conclusion by saying no, no, it’s just that everyone can’t help liking Catarina. Yes, homophobia is still rampant in Japanese media, but this is still an act of craven cowardice on the part of the author. It would have been better not to hint at it at all.

What we have here, then, is a premise that had a great deal of potential but stretches its material too thin and ultimately falls flat. A second season has already been annouced for next year, but I don’t have high hopes for it. 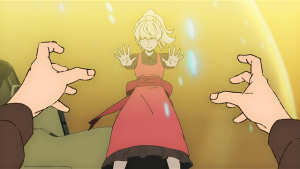 Tower of God #12 – Well, this would have been an excellent finale. Everyone gets a moment of awesomeness as the season comes to a close: Anaak and Endorsi officially accept that they are rebelling against the authorities together; Khun’s plan saves the day; Rak gets to kick a lot of butt; and Rachel finally summons the courage to fling her stalker out a window.

I know, Bam’s the hero for some reason and he’ll bounce right back somehow. But it is, frankly, a huge improvement to spend the closing credits watching him sink into the depths instead of the camera leering at Rachel’s abused body once again. This show has had great art, and a lot of likeable characters, but it has all been dragged down by the hopeless weight at its center. Being able to indulge in the fantasy that it has finally been disposed of is the best moment of the season.

SPACE: What Does It Take to Be a Moon?