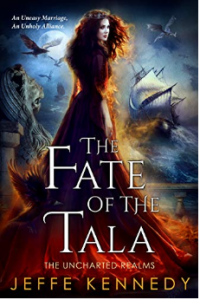 I’ve been a avid reader of Jeffe Kennedy’s award winning Twelve Kingdoms and related Uncharted Realms series since the very first book, The Mark of the Tala, released in 2014. Since then Jeffe has been weaving her web of epic fantasy, world building and laying out the pieces of the puzzle in a progression of novels, culminating now with The Fate of the Tala: The Uncharted Realms Book 5. I’m sorry to see the series end, although I hope for more books set in the same fantasy world, but it’s been a highly satisfying journey and I’ve enjoyed the adventure and the romance.

I had the privilege of asking Jeffe some questions about the series and this final novel.

The blurb: An Uneasy Marriage, An Unholy Alliance.

The tales tell of three sisters, daughters of the high king. The eldest, a valiant warrior-woman, conquered her inner demons to become the high queen. The youngest, and most beautiful outlived her Prince Charming and found a strength beyond surface loveliness.

And the other one, Andi? The introverted, awkward middle princess is now the Sorceress Queen, Andromeda—and she stands at the precipice of a devastating war.

As the undead powers of Deyrr gather their forces, their High Priestess focuses on Andi, undermining her at every turn. At the magical barrier that protects the Thirteen Kingdoms from annihilation, the massive Dasnarian navy assembles, ready to pounce the moment Andi’s strength fails. And, though her sisters and friends gather around her, Andi finds that her husband, Rayfe, plagued with fears over her pregnancy, has withdrawn, growing ever more distant.

Fighting battles on too many fronts, Andi can’t afford to weaken, as she’s all that stands between all that’s good in the world and purest evil.

For Andi, the time to grow into her true power has come. . .

Veronica Scott for Amazing Stories Magazine: What was the original story spark or inspiration for the series itself? What influenced you to want to tell this story in the new book? 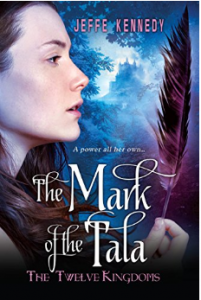 JK: With The Mark of the Tala, the original story spark was a dream I had. I was trapped inside a castle, while a monster that wanted me raged outside. My sister and her husband kept promising to protect me, but meanwhile everyone who went to fight the monster died. I knew I’d have to go out and face it myself. This, of course, became the midpoint scene of that first book, with Princess Andromeda –  Andi – at the Siege of Windroven. Since that book, I moved on to write about Andi’s two sisters – the beauty and the warrior – and then about various other heroines who take up part of the quest to save the kingdoms from terrible enemies.

When I got to The Fate of the Tala, I was uncertain for a long time who the protagonist, the POV character should be. Each book has been told in first person from a different woman’s perspective, with her personal journey and romance a part of that. For a while I considered writing The Fate of the Tala from multiple POVs, because there is *so much* happening at this point in the overall story. So many threads and players!

And then it hit me: the overall arc should wind up where it started, with Andi fighting the monsters. In many ways this whole story is hers – the legacy from her mother, growing into her power, finding fulfillment in the marriage of state to an enemy king that kicked off everything that happens after. And it ended up being super satisfying to return to Andi’s perspective, to finish off her journey.

ASM.: What attracts you to writing epic fantasy versus science fiction or urban fantasy?

JK: Well, I do like writing science fiction and urban fantasy, too – and I have, you just haven’t seen them 😊 – but epic fantasy is what seems to do best for me. I love epic fantasy because I love to write about heroic figures, about people trying to do the noble and right thing. I’m also fascinated by politics and social change, so epic fantasy accommodates that, plus I get to play with magic, transformation, and fantastic beasts, so it’s a win all around!

ASM.: Now that the series is complete, what % of it turned out the way you had planned from the first words and what % surprised even you, when it comes to plot? Any specific examples of developments that surprised even you the Author you’d like to share?

JK: First of all, we need to disabuse everyone of the notion that I plan anything at all! When I wrote The Mark of the Tala, I was basically writing up to that scene from the dream, and then kept going after, to find out what was going on. In the course of writing it, I met Ami (the youngest and most beautiful princess, whose story is The Tears of the Rose) and Ursula (the eldest and the heir, whose book is The Talon of the Hawk). I kind of knew where that trilogy could end up, but the world kept growing. What’s interesting is I did know with Ami’s story – spoilers ahead! – that her baby would be kidnapped and the three sisters would go after it. I got some criticism at the end of The Talon of the Hawk, when they recover the baby, that it didn’t make much sense why the abductors did it. And I kind of agreed. I figured they were just crazed agitators and let it go.

But *then*, as I was writing The Fate of the Tala, all of a sudden Andi figured out the pattern – she puts together the true reason for that abduction and how it ties into this long term plot against them. that’s been driving so much of their problems. That was an amazing realization! 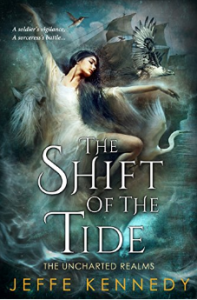 ASM.: Sometimes events just work themselves out! Which character was the most challenging to write and why? (For this book or the series in general or both)

JK: I think the most challenging character was Zynda, the Tala shapeshifter who is the protagonist of The Shift of the Tide. She’s wilder and freer than most, having spent so much time in animal form. I really wanted to capture the essence of a woman who thinks very differently from someone who isn’t a shapeshifter – and who sees the world in a different, even alien way. Amusingly, some readers who know me personally have said they think Zynda is the character most like me, of all my characters. I’m not sure what to think about that!

Beyond that, though, The Fate of the Tala was an incredibly difficult book for me to write. That’s why it’s releasing so much later than I predicted. Finding my way through this final battle, tying up all those threads, gave me major headaches.

ASM.: This book is full of many events happening at the same time – battles, sorcery, strategy, personal – many of them with Andi at the heart of it all. How did you keep the plot threads organized for yourself, so you could present it in the right order for the reader? (Because you do a great job and it does NOT get confusing.) Spreadsheet?

JK: I *wish* I could’ve used spreadsheets for that! And I tried several times during the course of writing the book. I made some lists, even tried some diagramming, but none of it worked. I did do a lot of rereading of the previous books, and a lot of mulling over the story. Ultimately, however, I had to follow the story and let it fall into place on its own. I did go back and layer, revise and adjust numerous times. Eventually it worked!

ASM.: How did you develop the concept of the three goddesses? What were your influences?

JK: The three goddesses emerged on their own in The Mark of the Tala. I originally wanted Glorianna, the goddess of love, to be essentially the state religion. I wanted that contrast of a goddess who is presented as all things pretty and safe, in the way that religion can be the opium of the people, and as a contrast to Andi’s journey into the darkness, to the goddess Moranu, of the moon, shadows, and changeability. It made sense that Ami, celebrated for her beauty was commonly seen as the avatar of Glorianna. But there were three princesses (as there always are, in the old stories) and if Andi was finding her alignment with Moranu, then Ursula would look to the goddess of warriors and justice, Danu, who I modeled on Athena. I was a comparative religious studies major in college, so I’ve always been interested in how the gods exemplify human ideals.

As the stories progressed, the role of the goddesses in influencing the characters’ ideals and journeys continued to deepen. Especially with Ami in The Tears of the Rose, whose story is all about surface appearance vs. true value, she discovers that the “state” version of Glorianna’s worship has little to do with the true ideals that the goddess represents.

ASM.: Do you envision telling more stories set in this world? Not to do spoilers but it does feel as if there might be at least one more book with a certain Dasnarian former princess…and then there are all the various children who seem to have fascinating futures ahead as adults…

JK: Ha! Your story instincts are spot on. The one thread I couldn’t quite tie up in this book was – Spoilers ahead! – was finally dealing with Emperor Hestar and the Dowager Empress Hulda. I thought I could fit it in, but it would be another 20-25K to tell it right, and I realized that part of the story is really Jenna/Ivariel’s to tell. So I am going to write that novella, The Lost Princess Returns, to have out tentatively in June.

Then, yes, I plan a trilogy of linked books with the next generation as it were. Astar, Stella, little Salena, Andi’s baby, Zynda’s baby, and Nix’s baby – all grown up – will go on a quest. Romance and hijinks will ensue! 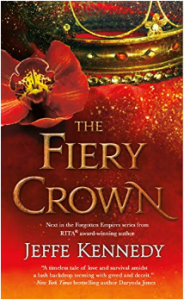 ASM.: And after tying up all those pieces of the story, what’s next for you?

JK: Now that The Fate of the Tala is *done* – yay!! – I’m diving into writing book three of my Forgotten Empires trilogy: The Promised Queen. Book one, The Orchid Throne, came out last September, and book two, The Fiery Crown, comes out May 26. I’m excited to tie up that arc too!

JK: Right now I’m reading Aurora Blazing by Jessie Mihalik – so good! – and JD Robb’s In Death #50 – Can you believe that?? I’m addicted to that series, so I can’t wait to glom that. Other than that, I have 316 books on my TBR (yes, I do have a spreadsheet!), so who knows… 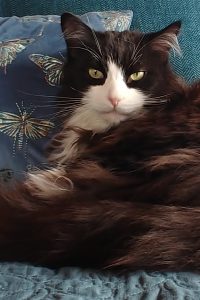 ASM.: And, is there a current photo of the two cats you’d like to 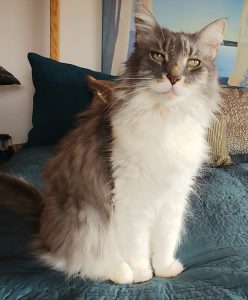 For more about Jeffe and her books visit https://jeffekennedy.com/home

NOTE: For this interview I did receive an ARC copy of the book.