Home Review Review: Journey to Where by Steven Paul Leiva 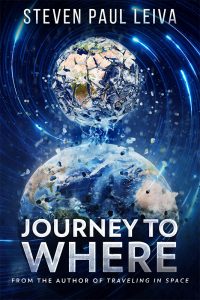 The novel Journey to Where by Steven Paul Leiva from Third Street Press is a fresh adventure of discovery that reads like a number of familiar SF classics, but with a hint of modern elements taken from today’s headlines.

A select group of scientists gather in the desert to conduct a ground-breaking experiment using an enormous particle accelerator. The unexpected result hurtles the team to an alternate world where humans do not exist and the dominant species views them as animals. Mixed in with the challenge of trying to communicate with the intelligent life and survive the strangeness, the desire to somehow recreate the experiment in a stone-aged world with hopes of returning to their original universe is paramount.

In the spirit of Edgar Rice Burroughs’ 1918 classic The Land that Time Forgot (an author also referenced by the narrator with intentional comparisons to help convince the reader of the story’s fantastic plausibility), our heroes are thrust into an unfamiliar world of prehistoric wonder.

The process of teleportation has been addressed in variety of ways throughout literature, but many leave a lot to the imagination or simply avoided the issue. John Norman’s Gor series, Stephen R. Donaldson’s Chronicles of Thomas Covenant, and even Burroughs’ John Carter stories danced around the science to simply jump right into the crux of the story. But Journey to Where takes a fresh approach by giving a nod to current events, feeding off of the growing public concern regarding the unknown potentials of particle accelerators. Though this story might add fuel to some of those fears, the inclusion of such a topical technological element is sure to bring pure joy to the hard-core fans.

The character development of the cast in Journey to Where is quick and effective, allowing the reader to immediately accept the internal conflict within the group and follow the drama within the adventure with anticipation. Though the sarcastic and sometimes humorous banter often traded between characters helps lesson some of the obvious tension, the dialog does get lost at times when trying to determine exactly who is speaking.

The author’s true strength is in storytelling. The attention to detail is spot on, providing just enough visual imagery to fill the reader’s perception without diluting the setting with unnecessary clutter. Throw this in with a strong cast and a nicely paced plot, and Journey to Where by Steven Paul Leiva is a fun read sure to entertain fans of the classics.