Right now, if you aren’t in Dublin, Ireland, you are not at Worldcon, and that should fill you with at least a small amount of jealousy, regret, disappointment, frustration and curiosity.

The remote coverage of the convention this year is probably the most socially-networked involved that I’ve experienced so far;  there’s tons of attendees posting on Facebook, sending photos to various websites – File770 in particular – and tweets galore;  two days ago (Thursday), a goodly number tuned in for the live broadcast of the Opening Ceremonies and Retro Hugo Award presentations.

But, as anyone who has been there can tell you, there is a huge difference between being there and almost being there.

I will say that from all reports so far gathered, it appears that just about everyone is having fun;  some missed panels, some illness, some frustrations with the fact that ‘foreigners do things different’ (traveling is often a case of “I’d have asked, if I had known to ask”), but despite what largely appear to be minor individual hiccups, the con appears to be running smoothly.

We wish everyone a good time.

There are at least four other nominees in that category that are actually deserving of an award in this category.  I sure hope that enough voters thought so to give one of them the win.

Sorry.  Bo dragged a soapbox into the room and I couldn’t help but get up on it for a couple of seconds.

Years ago, I obtained permission to use the Hugo Awards service mark for a series of t-shirts that I (unsuccessfully) marketed through my blog.  I can’t find the illustrations for all of them to share with you, so a description will have to suffice:  one listed all of the Hugo Awards winners by name (as in Isaac Asimov, Ray Bradbury, etc) and noted how many they had individually won;  another graphically displayed a map of the world highlighting countries that had held a Worldcon, along with a listing of each one by year, which brings me to:

When I made those shirts, it was, I think, in 2006, the year before Worldcon was held in Yokohama, Japan.  It was an outlier on the map, as only Germany and The Hague had previously broken the English Language countries only appearances for Worldcon.

What a change a few years have wrought.

Since 2007 though, 6 out of 14 Worldcons (counting the scheduled NZ con) have been held outside the US – 43% – nearly doubling that percentage.

Countries that have held Worldcons are,

While I would still prefer each and every Worldcon to take place in my very own backyard (We’re fans, we’ll figure someway to fit everyone in), I fully recognize, approve and appreciate the fact that WSFS, the “unincorporated literary society” that represents the collective soul of the fans, has chosen to actively attempt to spread its message across the globe.  It’s fascinating to watch “Worldcon fever” take a hold of a country’s fan base, for them to realize that, yes, they are in fact part of the family and if they put on a good show, the fans will come.

Final note:  The one T-shirt design I did manage to find in my voluminous and chaotic files was this one – 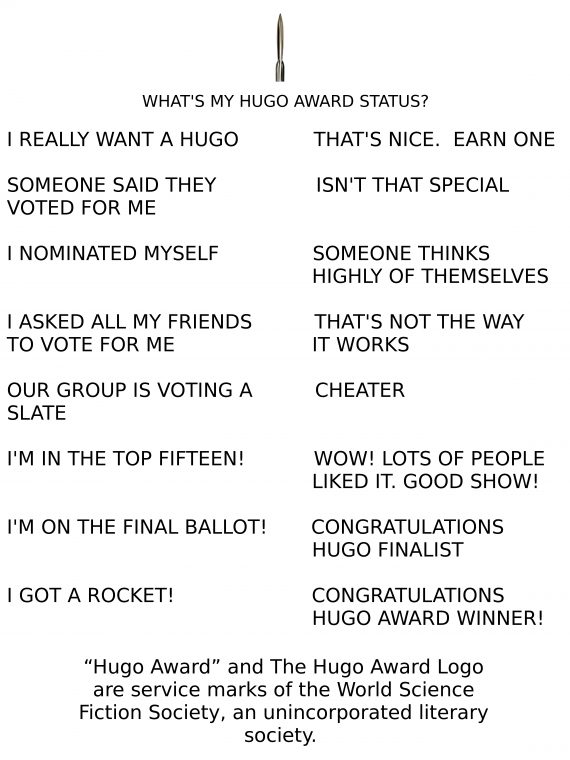 Which is not available for sale but which does set out my feelings about how this all works.

If you are in Dublin, stop wasting time here and go and enjoy the con, so you can report back and make the rest of us feel even more miserable.  If you aren’t in Dublin, take your time here as a way of avoiding non-attending depression.  And remember, New Zeland, next year!

We’ve really gone above and beyond with this, our latest issue. Twice the contents and full color artwork throughout.

Where will our children find their inspiration?

New Releases in Science Fiction/Fantasy/Paranormal Romance for MAY 26