In this week’s viewing: Granbelm delivers on its promise of a magical duel, Dr. Stone gets into scientific sorcery, and more!

Editor’s Note: Our scheduler missed this post on Thursday and I missed that the scheduler had missed it, so we are presenting it today. 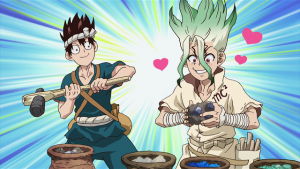 Dr. Stone #7 – Kohaku leads Senkū to her village, where, in the tradition of modern-guy-meets-primitive-civilization stories, he must prove his worth with a duel. Only, since this is a story about how genius conquers all, it’s a duel of cool science experiments that kids should definitely not try at home without supervision! Senkū wins not just a place in (well, near) the village, he also gets an eager assistant and a stockpile of new minerals for his next steps in bringing back technology.

He also has a new mystery to solve. Where did these people come from? If they originated with other local victims of the petrification ray who happened to wake up sooner, why are so many of them white (blond hair + blue eyes = white person, in anime) and why do they speak fluent Japanese but use English numbers? What’s with their curious system of naming everyone after rocks and metals (Kohaku = amber; Ruri = lapis lazuli; Kinro = gold solder; Ginro = silver solder)?

But Senkū’s first concern is the mysterious illness the village priestess is suffering from. I hope we get a good explanation next time of how he determined that Ruri’s illness wasn’t viral. At least it’s plausible that by now antibiotic resistance will have ebbed. 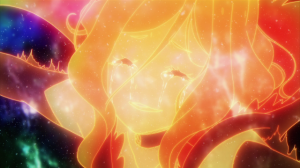 Granbelm #7 – Anna is pumped up and ready for revenge at the next full moon. Shingetsu tries once more to reason with her, not realizing that the constant refrain of “You can’t beat me” is like waving a cape in front of an enraged bull. The resulting fight is suitably epic, and in the end, Shingetsu is right.

This leaves Mangetsu, Shingetsu, Kuon, and Suishō, with Kuon next up to be eliminated as the least significant character. At that point, everyone may finally be able to see who the villain is. And that may point the way to figuring out what the power Mangetsu represents is. 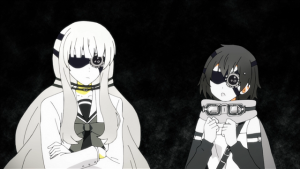 The Ones Within #7 – This time the game is a simple matter of hide-and-seek. Simple, that is, in the sense of that there are no clever rules dodges that will help. But once again, the bizarre mix of skills and backgrounds the players bring to the game means that someone will always make it through.

With the horror framing and references, this should be Karin’s chance to shine, seeing as horror games are her specialty. Instead, it just highlights the fact that she’s the one character who hasn’t been filled in at all. We know at least something of everyone else’s motivation or life outside the game, but Karin is still just Yuzu’s straight man.

Speaking of backgrounds, Kaikoku looks like he’s gotten even closer to the White Room now that he’s found the picture of Yuzu and Akatsuki. If they’re part of the project which created this game world, that would explain why Paca has been so lenient with Akatsuki. But how does that photo even come to be inside the game?

There are many reasons that I love science fiction on the screen above and beyond any other format. I’ve always been someone who enjoys being told a story where I can see it in front of me. Yes I love the theatre too, but I also love the special effects with films and TV shows […]

What Was the Plan?