One of the things that is true about human societies and cultures is that each generation brings its own take;  it chooses what to carry forward, what to leave behind, what to venerate, what to denigrate.

This is as true for the Science Fiction community as it is of any other culture.

One strain that always exists within a culture (I’d argue a fundamental and necessary component) are the people whose desire is to acknowledge and preserve that cutlure’s past, the antecedents, the foundational influences, the history, in as pure and as detailed a manner as is possible.

For those who find history interesting, this is interesting.  Those who do not find it so are, nevertheless, beholden to history’s influences, partake of a community built upon its bones and rely upon it in ways too numerous to catalog here.  This means then that whether or not the history of our Science Fiction community is important to you personally, the exercise of unearthing, analyzing, cataloging, refining, verifying, opining and accessifying is fundamental to the continued existence of that community.

There are numerous extant projects, many well-established, that have been serving this function for years – the Fan History Project, The Science Fiction Encyclopedia, The Contento Indexes, the Fancyclopedia, the Fictionmags Group*, the First Fandom organization, the Internet Speculative Fiction Database and numerous others.

A new project recently brought to my attention, however, is, I think, attempting to do a bit more by presenting information regarding the first generation of Fans in a more popularized format than we have previously been exposed to.  Which means that if history isn’t your thing, this may be your thing (and of course, if history is your thing, well, you gotta have this!). 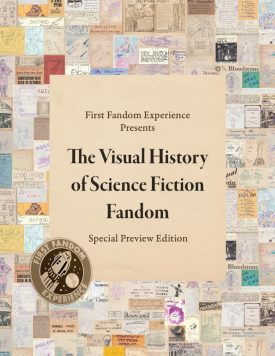 I refer to THE VISUAL HISTORY OF SCIENCE FICTION FANDOM, presented by the First Fandom Experience.

After contacting those responsible – David and Daniel Ritter (a father and son team!) I received a limited and numbered edition of three samples of their inaugural work – the Visual History, a Timeline of Science Fiction Fandom in the 1930s and a facsimile copy of The Planet, one of the first fanzines.  (Full disclosure would also reveal that David and I met for lunch recently and, among other things, he gave me a very nice First Fandom Experience lapel pin – we swapped, I gave him and his son an Amazing Stories lapel pin;  fitting in a way. An uncovering of fannish history will reveal that it began in the letter columns of the magazine).

David and I (Daniel was unable to make the meet) had a very enjoyable conversation about their project, possible ways in which our projects might benefit each other and one thing became very clear to me:  David (and by extension, his son Daniel) share my deep love and interest for the history of our community.  More important to the project than such emotions, David demonstrated a rich, deep and detailed knowledge of that history.

(If you want to talk “arcane”, a good portion of our discussion centered on Donald A. Wollheim’s motivations for devoting a lot of energy to disbanding various early science fiction clubs.  Seems in that case that idealism and revenge worked hand-in-glove.  If you want detail though, you’re going to have to follow The First Fandom Experience.)

If the previews I have received are any indication, they are well on their way to achieving those goals.

Their future plans are intriguing.  Their website lists the nature of upcoming volumes as –

Volume I: A Tour of the 1930s
Volume II: Key Fanzines of the 1930s
A ~200-page softbound volume of facsimile images of key fan-produced content
Volume III: Keepsake Facsimiles from the 1930s
Physical facsimiles of selected rare early fanzines

But what I find perhaps the greatest appeal of this project is the work that has been done in locating and reproducing artifacts of that bygone era.  Fanzines, ephemera, letters, images of things that I’ve previously read about in various Fan Histories (Moskowitz, Warner, Knight, Asimov, etc), but have never seen, let alone now have the ability to hold in my hands.

These facsimiles will, in fact, be of much higher quality than the originals;  one of the issues the Ritter’s face is the decay and fading of much of that early work:  some fanzines were produced by typing through multiple carbons;  others on hektograph machines, and all usually on very cheap paper.

Speaking of which, here’s the first page of The Planet, one of the first fanzines, from 1930:

(If you’ve never experienced material prepared on a typewriter, that may look a bit odd what with some letters darker than others, ‘o’s filled in with ink & etc., but such were the technologies available at that time.  How many of you can say you’ve actually typed stuff – in two columns no less!?)

The prelude volume is gorgeously laid out and rife with images and illustrations;  it covers the fans, the fan publications, their interactions with the professional publications, the founding of clubs and includes an illustrated history of an early superfan, Aubrey MacDermott.  I’ve scanned one partial page that gives you an idea of what this publication looks like – but can’t really do it justice as I am unwilling to damage my signed and numbered copy with the scanner: 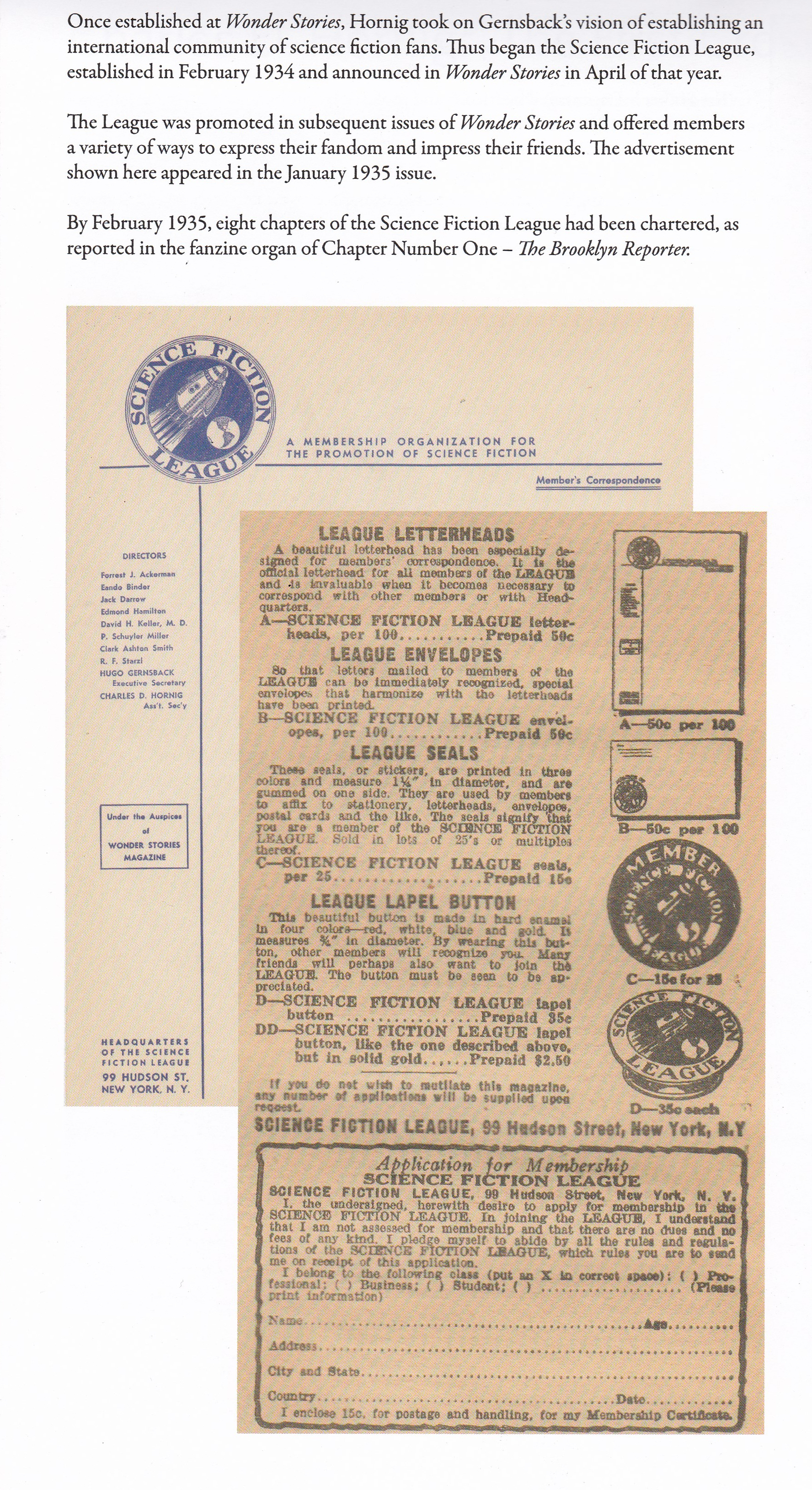 That’s about half the page, devoted to ephemera for the Science Fiction League, the commercial fan club centered on Gernsback’s Science Wonder Stories magazine that was eventually destroyed by Wollheim – the subject of the aforementioned luncheon discussion.  Wollheim stated that Fandom should not serve any commercial interest (hence the non-commericial nature of fandom today – see?  History!), but he was also very pissed at Gernsback for not paying him and a handful of other writers for their stories.  Yes, Gernsback had his flaws too.

They’re offering all of this first volume material for a very reasonable fee $20 for the regular version or $24 for the signed version (only 12 left!).

Here’s the back cover text from the first volume that, in their own words, tells you exactly what they’re all about: 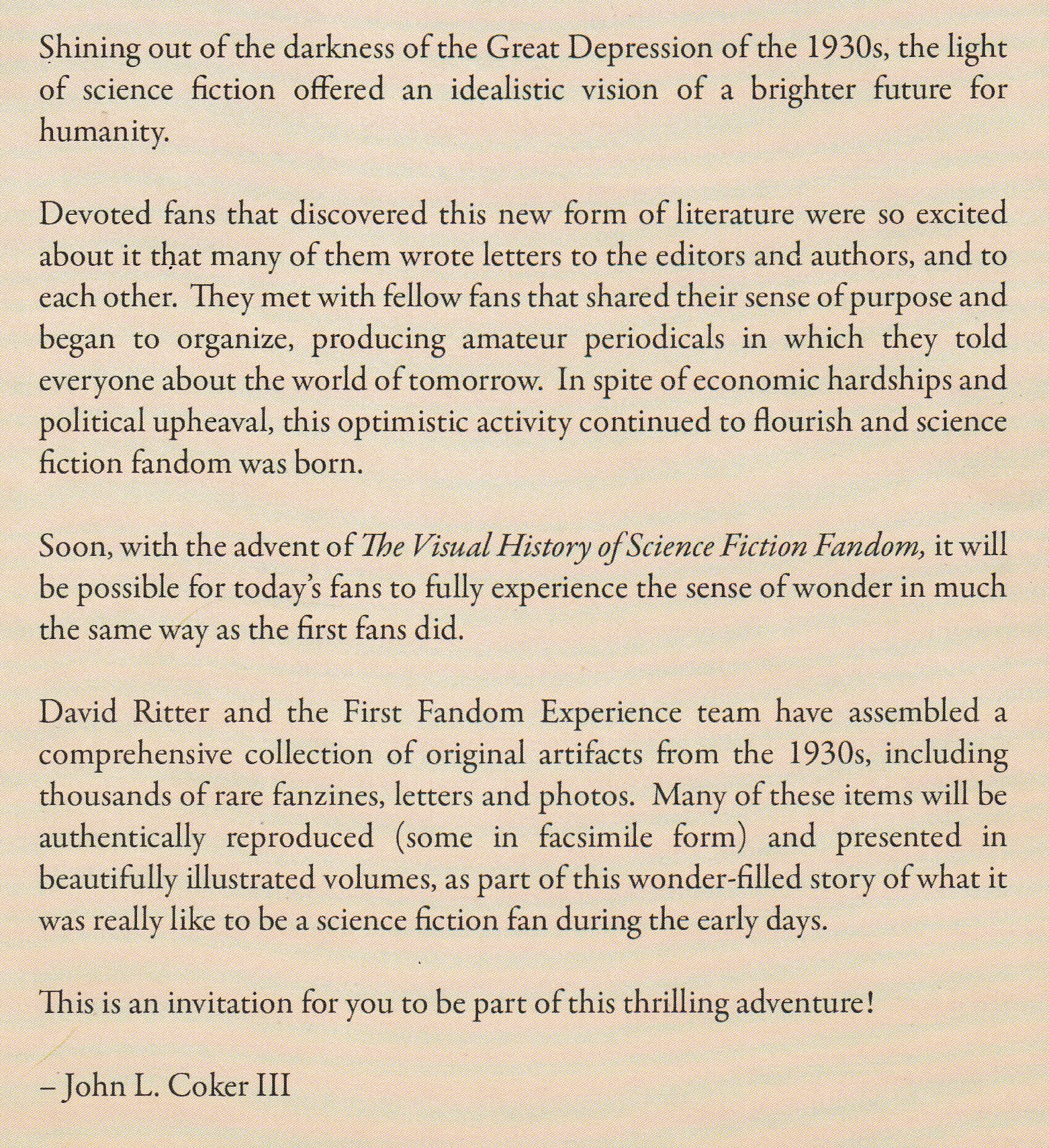 We seem to be experiencing something of a renaissance of fannish history these days (a good thing):  If that’s the case, then The First Fandom Experience is a Donatello or Raphael, Michaelangelo or Leonardo of such efforts, and I urge everyone who is a member of fandom to check then out.

*Fictionmags is a private group