In this week’s viewing: Attack on Titan finally gets to the basement, Dororo heads for uncharted waters, and more! 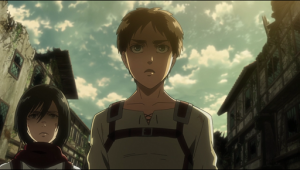 Attack on Titan #56 – Armin wakes up with a bit of amnesia, necessitating a quick recap of the last couple episodes. Sitrep: the Survey Corps has been all but wiped out, most of their targets have escaped, and Armin himself has only just recovered from a suicidal flambéing by eating one of his old comrades. While Armin digests that news, so to speak, Eren leads a search party to the fabled Yeager basement.

The walk to his old house becomes a series of flashbacks to moments in the first couple episodes. It really emphasizes how much time has passed both inside and outside the story, and puts a neat bow on the impending end of this season. And there’s another reason it’s a good time to tie everything up in a nice bow like this: Wit Studio, which has been leading the production of this show since season one, has announced that it will not be doing so any longer. It’s a nice look back at all the work they’ve put into it.

At the basement itself, Eren’s key nearly turns out to be a useless McGuffin (in fact, I don’t think Levi would have hesitated to demolish the desk either, if the key hadn’t been available for that). And the treasures everyone has been waiting all these years to see are three books, an artifact of a technology beyond anyone’s understanding, and a flashback to Grisha’s early life in some place with strong resemblances to a 1930s Jewish ghetto. That is some powerful imagery to be playing with, and we’ll see next time if the story rises to the occasion. 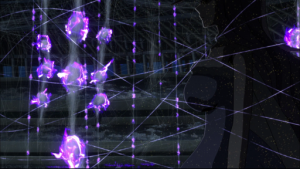 Midnight Occult Civil Servants #10 – The 2020 summer Olympics are scheduled for Tokyo, and the city goverment is determined that it is not going to be one of those awkward Olympics where the world shows up to find the wrong weather and half-constructed hotels and whatnot. No, it is going to be perfect, it is going to be on time, and it is definitely not going to have its most crucial facility turned into a nursery for a zillion baby insect Others, no matter how cute they are.

Kanoichi has made up his mind what to do about a stadium full of giant coccoons, but he invites Arata over anyway. I don’t know if Kanoichi is trying to provoke Arata into doing something stupid, or just being a huge jerk. Unfortunately for everyone, Arata and his co-workers eventually work out that Kanoichi is also going to be upsetting a whole lot of more powerful beings. Like practically the entire native pantheon.

Shinto tradition says that the gods hold their annual convention at the Izumo Grand Shrine on the 10th to the 17th days of the 10th month of the old lunisolar calendar (generally falling in November). In the world of Midnight Occult Civil Servants, this extends even to lesser supernatural creatures (such as Yuki, apparently), and it is preceded by a burst of silk production to make fancy new clothes for everyone. Arata isn’t just rushing to save Japan from the wrath of the gods, he’s trying to stop a fashion disaster! 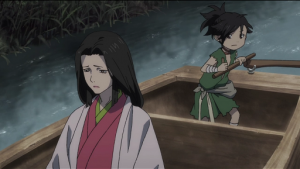 Dororo #22 – Midoro the horse is a bit upset at her own treatment at the hands of the army of Daigo, so she and Hyakkimaru join forces to become an unstoppable whirlwind of death. All that stops them in their tracks is the reappearance of Tahōmaru and his retainers, now fitted out with Hyakkimaru’s remaining missing body parts. Meanwhile, Lady Nui and Dororo sneak away to try to find something useful they can do.

We’re in uncharted territory now, even though this is an adaptation. Both the original manga and the first TV adaptation fizzled out when Osamu Tezuka got distracted by other projects. For the final showdown, this show is now free to do as it likes.

It appears that the final demon’s endgame is to have Hyakkimaru kill everyone; in that sense, it will finally have had its turn to devour him. Everyone involved seems all too willing to play their parts. Dororo somehow has to get from being washed up in a semi-abandoned village, back to the battlefield to talk some sense into everyone. 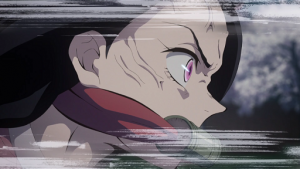 Demon Slayer: Kimetsu no Yaiba #10 – All Tamayo claims to have done is healed Nezuko, but Nezuko has suddenly leveled up to the point where she can return demon-thrown balls without kicking her own leg off. When she scores a goal, it’s officially on and all the demons available have to work together to stop the remaining demon. Meanwhile, Tanjirō has to use all his strength to avoid being beaten to death by a directed graph.

And after all that, the two demons turn out not to be any of Kibutsuji’s trusted ultra-powerful lieutenants. So that means Tanjirō and Nezuko have even more grueling training and fighting to go before they can hope to take any of them down, let along Kibutsuji himself.

Kibutsuji is revealed to be even more insecure and controlling than before. The more powerful the demon, the tighter a grip he keeps on them. What would the demon world look like if he were removed?

But a new day dawns, and Tanjirō and Nezuko have to make their way to their next mission… hang on, wasn’t Tanjirō’s leg broken? Are we getting a meaningful clue from the way it has spontaneously healed, or is that just a narrative error? 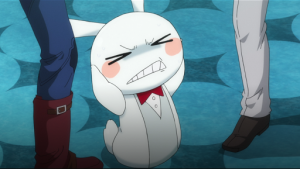 RobiHachi #10 – Yang and his henchmen enjoy a break from the chase, seeing the sights and eating tasty food while waiting for Robby’s inevitable detainment at the Isekandar checkpoint. But they are thwarted at the last minute by Hatchi making a payment that takes Robby off the no-fly list. Unfortunately for everyone, all the time in between is taken up by Robby and Hatchi going through an old and tired routine about incompatible roommates.

Viewed as a whole, this was easily RobiHachi‘s worst episode. But that part at the end is worth thinking about. If Hatchi just paid off Robby’s debt to Yang, then Yang should have gotten a notification about it and known that it was pointless to keep waiting for Robby to be detained. So who did he pay off, and who is Alpha Force looking for? I wonder if it’s maybe Hatchi himself.

In this week’s viewing: Galilei Donna and Kill la Kill check out life at the top of the heap, Kyousougiga goes behind the scenes, and more!

Listen to the Sounds of Mars