In this week’s viewing: Midnight Occult Civil Servants and Dororo literally face the ghosts of the past, a concluded show comes back for another round, and more! 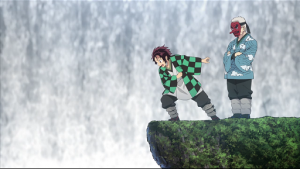 Demon Slayer: Kimetsu no Yaiba #3 – With a mentor located and a goal to aim for, it’s time for Tanjirō to experience one of the oldest rituals of shōnen adventure stories: the training montage. As is traditional, this includes insanely difficult challenges, insanely repetitive exercises, and a few moments that are just insane without qualification. Also traditional is the final test which appears all but impossible.

Even the viewer not familiar with Shinto will guess that the rope and streamers around the boulder that Tanjirō needs to split signify that it is a very special boulder. The rope is a shimenawa, and by its presence it warns that the boulder is sacred. The fact that Sabito first appears atop the boulder, along with the fox masks that he and Makomo wear, signal that the siblings are spirits that reside there.

In contrast to the typical shōnen training period, which is usually a month or so, Tanjirō spends a more realistic two years before he is prepared to even try joining the demon-slaying corps. Through all this, Nezuko conveniently fades into the background by staying in a coma. Too conveniently, I think. I expect Tanjirō is about to find out this was deliberate. 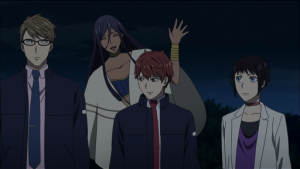 Midnight Occult Civil Servants #3 – Arata finds out who he’s up against, and it’s the Aztec incarnation of Coyote. Huehuecoyotl is their god of song and dance, but also trickery and unpleasant surprises. Like, say, finding yourself trapped in the basement of a disused hospital full of army surplus zombies from World War II.

Fighting their way to the altar, Arata and his co-workers face a horrible choice, because apparently Huehuecoyotl is a fan of The Dark Knight. But Arata comes through once again, talking his way out of the situation thanks to a faint memory of a family legend about a spirit that Abe no Seimei called Kohaku (Amber).

So who is this Abe no Seimei that everyone’s so interested in? Though sometimes described as a sort of Merlin figure, he was an actual historical person, living in the 10th century. He was a practitioner of a type of occultism called onmyodō, though legends which have sprung up since attribute all sorts of fabulous powers to him.

And speaking of mythology, one other fact about Huehuecoyotl: He was bisexual. When Arata thinks the god is acting like a spurned lover, he may be closer to the truth than he realizes… 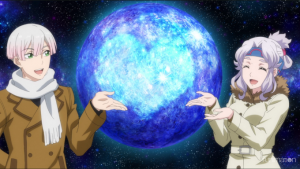 RobiHachi #3 – The fugitives make it as far as Pluto this time before they’re forced to land and take up PR consulting again. Thanks to intense stereotyping and a fortuitously shaped landform, they soon have the dwarf planet on its way to better tourism. To keep it there, they have to take on Pluto’s old PR firm in a battle that nearly brings anime fight scenes to their logical final form: no actual attacks, just people shouting out attack names.

Even in alternate 2019, the International Astronomical Union has at some point approved the same names and the same unfortunate downgrade in Pluto’s status. And, by the statement that there is nothing special about Pluto, the alternate IAU apparently chose not to adopt the proposed definition for “double planet” which might have made up for it.

Meanwhile, Yang and his henchmen play the part of obnoxious foreign tourists. They show up to Mars and are terribly disappointed that all the octopus theming is gone; what will they think of Pluto? Associating the villain with the country that sends the most tourists to Japan is starting to not look like a coincidence. 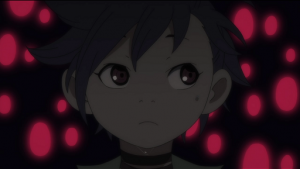 Dororo #15 – Hyakkimaru and Dororo piece together the mystery of the monsters and haunts around the village until the full story is revealed: their peace and prosperity was bought from the moths through the murder of the Buddhist nun and the children she was sheltering. And now, as the moth children mature, the village burns anyway.

Dororo looks at the resulting devastation and feels for the people in the village. Hyakkimaru sees Sabame as no different from his own father, and the fires as the just result of the bargain unraveling. Dororo has begun to see Hyakkimaru as not caring what collateral damage comes of his complete focus on killing demons, but this village seems like a bad example, given that (a) the villagers really did murder a bunch of innocent people and (b) Hyakkimaru isn’t just mindlessly persecuting demons in this case, he’s regaining a major body part that was taken from him.

But, the story really needs to get Dororo and Hyakkimaru separated somehow, so that Dororo’s father’s traitorous old buddy can capture him. Now that it’s done, Dororo will truly be the main character for a while, as he has to confront what access to his father’s treasure could do for his life. 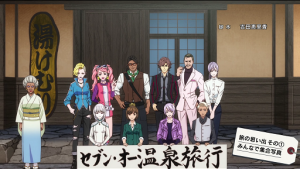 Double Decker! Doug & Kirill bonus episodes – Hey, remember this one? The last of the three promised bonus episodes was just released, so let’s talk about them.

If you were hoping for some new revelations about the big mysteries still sitting between Double Decker and Tiger & Bunny, you will be disappointed. All three episodes are comedy fluff, filling in some character details but leaving the larger story arc untouched. One is mostly characters discussing their pasts, the second is basically an extended exercise in getting Kirill into a skirt again, and the third is the semi-obligatory hot springs episode which oh so nearly manages to completely avoid the fanservice clichés that hot springs episodes typically devolve into. (Unless your big thing is Kirill being an idiot while nude, because there is a fair amount of that.)

The last one is easily the best, a tale of a work retreat which turns out to be mostly a terrible idea but where some fond memories are eventually made. All three are entertaining enough to remind us that Double Decker was a very fun show, and it still has a lot that needs to be resolved. Any chance of another season?

A few years ago, the Experimenter Publishing Company (Amazing Stories, fyi) partnered through a licensing agreement with a company named Digital Parchement Services, otherwise also known as FuturesPastEditions;  DPS is one of the first ebook publishers and among the many many books they produce, they have established a specialty niche devoted to insuring that many […]