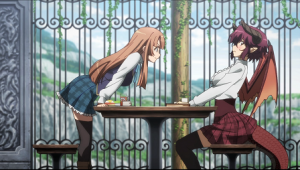 Mysteria Friends premiere – Anne and Grea are two princesses attending a magic school in Generic Medieval-ish Fantasy Land. Anne is the forthright one, Grea is the shy one, and they may have a mutual crush.

You wouldn’t know it aside from a stylistic callback here and there, but this is set in the same game-spinoff universe as the Rage of Bahamut series. It’s not looking to be an adventure show like the previous spinoffs, though. Most of it is Anne and Grea talking. Even when a creature of fire materializes in the library and Anne has to bind it, the focus is on the awkwardness caused by her showing up the class president and leaving Grea waiting.

Another thing which greatly concerns the director is the state of the girls’ clothing. We get multiple closeups of bosoms, the wing window in Grea’s blouse, and the all-important thigh gap. This show knows what audience it’s going for and doesn’t especially care about anyone else. 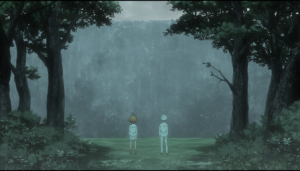 The Promised Neverland #2 – Emma and Norman talk through what they’ve seen and how they’re going to escape. A little reconnoitering beyond the back fence, and it starts to become clear that whoever is running the orphanage has actually thought through the problems inherent in trying to keep a bunch of super-smart kids contained. Not only that, “Mom” has figured out that something is up and brought in reinforcements.

The shōnen foundations of the series become visible with an arbitrary rule here, a black-and-white declaration of morality there (the deliveries happening every two months, the new adult immediately classified as an enemy), but its real strength continues to be the horror inherent in the situation and Emma’s resourcefulness in the face of it. Immediately she and Norman are taking the first steps in making their escape route, and recruiting another conspirator.

This is staying strong on the production values as well as the story. It could easily be the best show of the season— let’s watch the rest and find out. 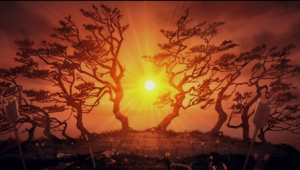 Dororo #2-3 – Dororo and his new friend travel to a village offering a reward for killing a monster, but not the monster that needs to be killed. And then Hyakkimaru’s past is revealed, and that of his adoptive father.

Yes, Japan in the Sengoku period (late 1400s-circa 1600) had a level of chaos, banditry, and all-around disdain for human life that approached Dark Ages Europe. While there was technically a shogunate in charge, across most of Japan it was every local warlord for himself. Thus the one village can murder travelers with impunity, and both Hyakkimaru’s father and the Shiba clan can act like anything goes in trying to grab more territory for themselves.

There’s a lot going on with religious themes here. Aside from the foreground ones about demons and salvation, Hyakkimaru is the subject of ongoing divine intervention (the carving in the background when Jukai slips on the riverbank is of Jizō, a guardian of children), and he’s now shown to have abilities shared by a holy man. Hyakkimaru’s and Jukai’s lives have, in fact, been preserved precisely to set right the wrong that Hyakkimaru’s father did when he made a deal with demons. 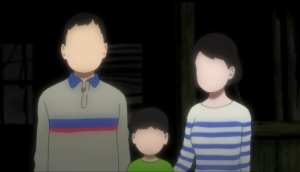 Mob Psycho 100 II #2-3 – Mob continues helping Reigen out on cases with causes natural, supernatural, and in between. But something is clearly on Mob’s mind.

The character dynamic that makes this show work is that Reigen may be a shameless fraud, but he takes a genuine interest in Mob’s well-being. Partly this is self-interest, given what Mob can do when he gets overwhelmed, but Reigen does seem to actually care about his “student” at some level.

Reigen needs Mob’s powers, but Mob needs Reigen’s emotional intelligence. In contrast to Mob’s out-of-touch parents, Reigen is the one who realizes that Mob is starting to see himself in terms of the harm he can do and the responsibilities he has. Heavy stuff, so thank goodness for that scene with the bullies.

The overall production still has the terrific verve and style of season 1, so let’s keep this one on the list. 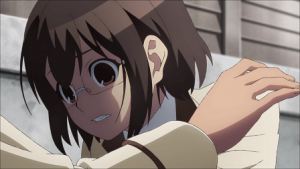 Magical Girl Spec-Ops Asuka #2 – Cutting a terrorist off at the knees, literally, is just another day at the office for Asuka, but for a civilian like Sayako, there’s a lasting trauma. Asuka is willing to share her coping skills, and it reminds her that her old comrade Kurumi only joined the fight because Asuka promised to be there to guard her back. Coincidentally, Kurumi needs her again because their old enemies seem to be returning.

The truly surprising thing about this show so far is how humane it is. Twice in two episodes, it’s refused to fridge one of Asuka’s friends just to motivate her. It’s incredibly rare for the R-rated action genre that this working in to show the aftereffects of violence on bystanders, and even when it does it’s usually in service of the point that the world is brutal and the hero needs to be brutal too. Throw in how anime usually reflects the Japanese attitude that mental injury is something to be borne and not talked about, and getting a scene like that one with Sayako is nothing short of a miracle.

It’s not all peace and love, of course; Asuka seems to approve of the police using torture on a known terrorist, for instance. But the overall handling of violence and the way Chisato and her dad are now set up for conflict over his real job suggests that this might at least, pardon the expression, interrogate that premise. 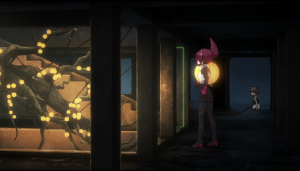 kemurikusa. #2 – Feeling secure in the knowledge that there’s a way to kill Wakaba anytime if circumstances require it, Rin and Ritsu start to let him in on how their world works. Although, when it turns out to involve a trip to new territory, Rin is pretty sure Wakaba won’t survive the journey anyway.

The kemurikusa of the title in all its various colors seems to be key to how this world works. There are five varieties so far: red causes Red Bugs, green dissipates them but heals humans, kiiro (which just means “yellow”, way to be needlessly obscure, Amazon) is useful for light, blue is a newly discovered type which seems to resonate with Wakaba… and then the non-human inhabitants themselves seem to dissolve into a purplish variety. Kemurikusa appears to be a living substance, but the fact that at least one kind can possess an apparent machine, as seen in this episode, suggests it may be an artificial creation.

This world will be some time giving up its secrets, but nothing can beat this show for sheer creativity this season. Seeing how Ritsu moves house (literally) was a delightful surprise, and I have a feeling there are many more to come. 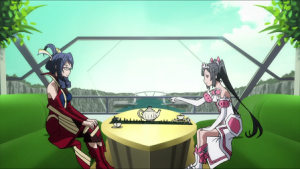 The Price of Smiles #2 – Even though there is a shooting war going on, Princess Yūki is kept blissfully ignorant of it right up until the point where she is hastily summoned to meet a returning carrier to say goodbye to her dying lifelong companion. And then the second main character is introduced as a member of the opposing military, so if she and Yūki are destined to meet, it means things are going to be getting very much worse for Yūki’s kingdom.

A few little hints are dropped about the nature of this planet. Flight is very difficult, for some reason. People are aware their ancestors arrived from somewhere else, and some Earth plants still haven’t been made to grow there. But it seems like most of this is just to set up the conditions for the story it wants to tell, which will be about finding some kind of friendship and happiness in the middle of war.

By the same token, though no motivation for the war has been provided, it probably doesn’t matter to the plot. It is doing a decent enough job with what it wants to concentrate on, but I think that won’t be enough to make the cut. 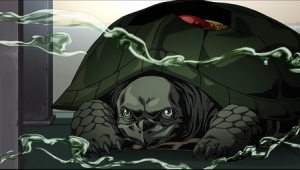 JoJo’s Bizarre Adventure: Golden Wind #13-14 – Back in Pompeii, the man in the mirror is defeated in the most complicated and gruesome way yet, with melting disease at every turn and Abacchio demonstrating just how far he’ll go for duty. But even that is nothing as to the team’s next challenge: confronting the disgusting horrors of old age. And slightly dodgy science.

While JoJo certainly continues to earn that “Bizarre” in its title, the ever more involved use of powers is starting to hit the point of diminishing returns. The resolution of the fight in Pompeii relies on limitations that are never quite clearly articulated, and the way the old-age power works turns on a statistic that is more complicated and nuanced than the author would like to believe. The turtle of holding, though, that’s always good.

Golden Wind just doesn’t feel like it can hold its own against this season’s other contenders, so I think we’ll be putting it aside for now. It’ll be running through the end of spring, so I may give it another chance in April.

That’s the last of the premieres out of the way, and it’s time to set the lineup: We’ll be following The Promised Neverland, Dororo, Mob Psycho 100 II, Magical Girl Spec-Ops Asuka, and kemurikusa. for the rest of the season. See you next week!

They’ve redone Lost In Space again. Did they do a good job? Well, uh….