Go See Spider-Man: Into the Spider-Verse 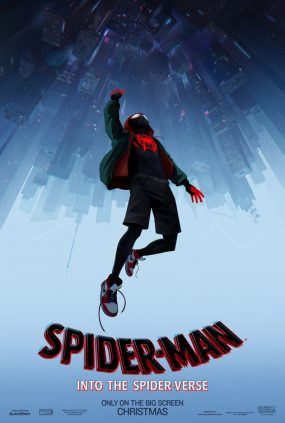 Bouyant, energetic, optimistic and more than a bit of a 2-hour inside-joke, Spider-Man: Into the Spider-Verse is what a reboot should always strive to be: a new look at an old favorite which actually brings something new to it. By focusing on a new Spider-Man, and ultimately new Spider-Men, Sony’s animated phantasmagoria threads the tiny needle of what has made the character so loved for so long while recreating him for a new audience.

That’s because this is not your father’s Spider-Man. Well, sometimes it is. The focus this go around is for a different friendly neighborhood Spider-Man combating the pressures of youth and poverty on the mean streets of New York and finding out that with great power comes great … well, you know. Young Miles Morales is the product of a loving family who he is trying to find his own identity apart from, something more like his fun-loving, danger craving uncle (Ali). When that leads him into contact with a bizarre, fritzy spider, he finds himself the only person standing between a crazed crime-lord (Schreiber) and crazed plan to merge dimensions which will ultimately destroy the world. Well the only person if you don’t count the half-dozen other Spider-people he soon finds himself surrounded by.

The filmmakers could have played it safe, focusing yet a fourth series on the tried and true Peter Parker background. The decision to move over to the more recent Miles Morales (Moore), and his more modern background is just audacious enough to keep the viewer focused on the new even while recreating the well-known tenants of the superhero origin. Moore’s voice work gather all of Miles’ attractive qualities without skimping on his teenage awkwardness. He’s characterized strongly enough that he’s never overshadowed even as more well-known versions of the character show up – especially Jake Johnson’s older, fatter, more cynical Peter B. Parker who has discovered being a middle-aged Spider-Man is not all it’s cracked up to be.

Though it does introduce us to a new Spider-Man, and a new look at the Spider-Man mythos, it would be a mistake to call Spider-Verse a good intro into the world. Producers Phil Lord and Christopher Miller are well-known for their deep cut style out of the box thinking. Spider-Verse is a proud recipient of that as they grab everything from recent popular additions like Hailey Steinfeld’s Spider-Gwen to idiosyncratic back-ups like John Mulaney’s Spider-Ham. It provides a near endless bag of gags for the filmmakers to pull from, and they make ample use of it, but it also requires a near constant stream of exposition to keep up with all the new additions and even then there are many which will only scan for long time fans. It’s great sport for the initiated but a wall for all others.

As complaints go, that’s a fairly minor one. The Animation from Sony Pictures Imageworks is crisp and refreshing, mixing modern CGI and a comic-book palette for a truly unique and very comicbook experience. Despite its length and twist and turns (it takes quite a while to actually get Miles into a Spider outfit) it seldom lags and frequently hums. Spider-Man: Into the Spider-Verse is not necessarily THE way to approach comic films – it’s more like THE way for a very specific viewer – but it’s got enough for everyone to remind even the most cynical of viewers why they love the character. And it opens up near infinite opportunities in the process.

Scientists May Have Solved Mystery of How Martian Moon Got Markings

The Longest Total Lunar Eclipse of the Century: Everything You Need to Know About Friday’s Micro Blood Moon

The Problem of Power in Space. NASA’s New Kilopower Reactor