This is a long overdue look at a captivating little story from John Dodds (Bone Machines, Kali’s Kiss, Babylon Slide). The Witch’s Promise is a novelette that reads more like a classic western than a chilling fantasy, but the mystic backdrop mixed with such realistic definitive characters makes this a compelling story for a wide range of readers. 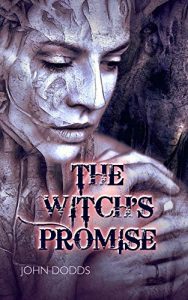 Ealon is a small blind boy who at times, seems to see much more than those around him. His mother Caitlin is very protective of her son, as the two live just outside a small community where different is considered evil, dangerous, witchery. Caitlin knows the dangers of this kind of hatred all too well, as she herself was excommunicated from the town because they believe she is a witch.

Alone, the two struggle to survive the brutality of hatred and fear. But when Ealon is abducted from their home, she finds herself on a chilling journey into a realm she fought so hard to avoid. Joined by the mischievous supernatural entity Straif who was once her familiar, and a man named Lorne who discovers he has unwanted links to the missing boy, they go off into an unknown wilderness to unravel a mystery, face unexpected dangers, and discover their true selves. Oh, and they look for the boy too.

There is so much packed into this story, yet it is tied together with such smooth clarity and believable characters, it’s easy for the reader to get absorbed and forget it is going to be a short journey. So, when the surprising end comes, you’re going to want more. Yes, these characters are well suited for this short tale. But sending them on another, much longer novel length journey, would be a welcomed read to look forward to as well. Hint, hint.

Centered around compelling characters in a vicious world filled with hatred and fear that is sadly comparable to parts of the modern world, The Witch’s Promise by John Dodds gives hope that there can be a rich reward to being different, and having vision doesn’t always have to be literal.

….but you’re older, Shorter of breath and one day closer to death

I’ve been thinking this week about art theft. I don’t mean art theft as in black stocking cap clad thieves pulling off a museum heist. What I’m talking about is art swipes, instances where artists have outright copied another artist’s work. Now, here I have to be careful because a charge of plagiarism is a […]

Upcoming Space Hotel to Be “Like a Small Cruise Ship”