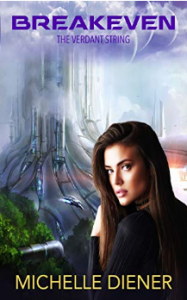 October is my favorite month of the year, at least on this planet! And as always, there are many new science fiction new releases to share.

Any new release from Michelle Diener catches my attention immediately. She’s terrific at world building and I’ve really been enjoying her newest series, Verdant String. Breakeven is the second book in the series and it’s high on my To Be Read list – I want to dive back into the world she’s created for this set of characters to overcome. Here’s the plot: Dee had been fighting one war, only to find herself caught up in another . . .

When circumstances leave Dee stranded on the Breakaway planet of Lassa, she has to choose–take the easy way out, or stand and fight an enemy much like the one she left behind on her home world of Garmen.

For Sebastian, leading the Lassian resistance has come at a heavy price. Forced to gamble the last of his resources on a risky ploy to get some leverage over the Core Companies that run Lassa, he stares defeat in the face when it fails. There’s no backup plan left. Nothing more to work with. And all around him, people are starving, and it looks as if the Cores have entered a deal with a hostile alien force, to enrich themselves even more.

But Dee inspires him. Even though it’s his fault she’s on Lassa to begin with, her courage and steady calm are the assets he needs, and unbeknownst to both of them, she has with her the key to bringing the Cores to their knees.

Now they just have to turn the lock in time. 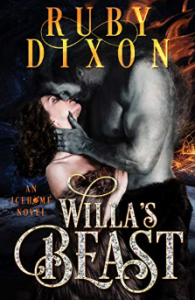 Ruby Dixon is one of the pen names used by a New York Times and USA Today Best Selling author and her  science fiction romances (SFR) can be relied upon to hit the top of the genre charts pretty much as soon as they appear. She writes on the steamy side but weaves her tales about characters with surprising complexity. The latest book, Willa’s Beast (icehome Book 3) sounds like a fun SFR take on many fairy tales with a beauty and a beast theme. The blurb: Beast. Creature. Monster. Dangerous.

All of these things have been said about Gren.

Willa doesn’t believe it, though. She knows that monsters can sometimes come in appealing packages. She knows that for all of his snarls and fearsome appearance, he’d never hurt her.

And she knows she has to get Gren away from the Icehome camp, because no one will ever see him as a person, not when he attacks all who come close. Not when he’s tied and treated like an animal.

She’s going to save him…or fall in love. Maybe both. Willa doesn’t mind that he’s a beast, as long as he’s *her* beast. 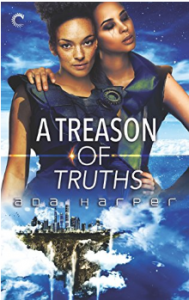 Ada Harper brings readers all sorts of high stakes interstellar intrigue and F/F romance in A Treason of Truths. The plot: She turned her back on her people and shifted her allegiance to the very Empire she was sent to betray

Now head spymaster, Lyre’s loyalty lies with Sabine, the Empress she has loved since childhood. But when Sabine visits the secretive Cloud Vault, the floating citadel home that Lyre betrayed, Lyre’s elaborate web of lies starts to untangle. Her very presence threatens Sabine’s future, and Lyre will do whatever it takes to protect her lover…even if that means sacrificing herself.

Empress Sabine Corvus has lived a life of service, pushing aside her own desires for the greater good. With the Empire teetering on the brink of war with the traitorous Syndicate, she cannot afford to show weakness. Although Lyre’s spymaster skills are her greatest weapon, their bond is Sabine’s Achilles’ heel. Regardless of the price, she will not give Lyre up. 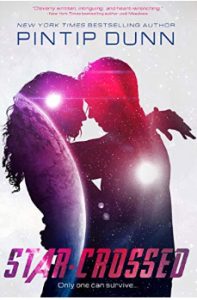 New York Times Best Selling author Pintip Dunn writes about agonizing choices in Star-Crossed, which is from the Entangled: Teen imprint but her Young Adult characters trying to navigate a dystopian world have found enthusiastic readers of all ages. The story: Princess Vela’s people are starving.

Stranded on a planet that lacks food, Vela makes the ultimate sacrifice and becomes an Aegis for her people. Accepting a genetic modification that takes sixty years off her life, she can feed her colony via nutrition pills. But her best friend is still getting worse. And she’s not the only one.

Now the king is dying, too.

When the boy she’s had a crush on since childhood volunteers to give his life for her father’s, Vela realizes her people need more than pills to survive. As tensions rise between Aegis and colonists, secrets and sabotage begin to threaten the future of the colony itself.

Unless Vela is brave enough to save them all… 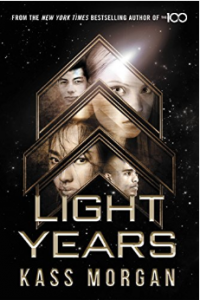 While we’re having a YA moment, let me mention Light Years from Kass Morgan, author of The 100, which became a highly rated science fiction TV series that I for one never get enough of binge watching. (I enjoyed the books too.) I have a feeling this new book has a lot of potential for screen adaptation as well.  This book is more ‘hard’ SF but with a few romantic elements apparently. The plot: Reeling from the latest attack by a mysterious enemy, the Quatra Fleet Academy is finally admitting students from every planet in the solar system after centuries of exclusivity.

Hotshot pilot Vesper, an ambitious Tridian citizen, dreams of becoming a captain–but when she loses her spot to a brilliant, wisecracking boy from the wrong side of the asteroid belt, it makes her question everything she thought she knew. Growing up on the toxic planet Deva, Cormak will take any chance he can get to escape his dead-end life and join the Academy–even if he has to steal someone’s identity to do it. Arran was always considered an outsider on icy Chetire, always dreaming of something more than a life working in the mines. Now an incoming cadet, Arran is looking for a place to belong–he just never thought that place would be in the arms of a Tridian boy. And Orelia is hiding a dark secret–she’s infiltrated the Academy to complete a mission, one that threatens the security of everyone there. But if anyone finds out who she really is, it’ll be her life on the line.

These cadets will have to put their differences aside and become a team if they want to defend their world from a cunning enemy–and they might even fall in love in the process. 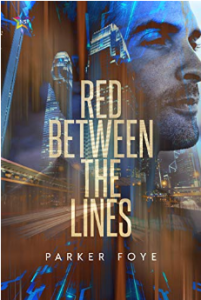 Red Between the Lines by Parker Foye provides science fiction adventure in a gritty future, with a M/M romance at the core of the story: Wynfield, a washed-up former Corpsman with optical bioware and a healthy chip on his shoulder, is reluctantly drawn into a conspiracy to take down Nutrindustry, the company responsible for both his “upgrade” from human and the city’s food shortage.

Playing clinic doctor for the day, Yeven doesn’t expect the mouthy former pilot and their begrudging attraction—nor the fresh twist of shame for his part in Nutrindustry’s past. He needs Wynfield, though, and for more than his smart mouth. Feelings would just get in the way.

In a world where the line between man and metal is thin, there’s more happening behind the scenes than even Wynfield’s enhanced optics are able to see. 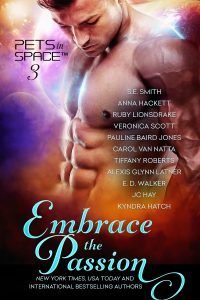 I’ll conclude with Embrace the Romance: Pets in Space 3, an annual science fiction romance anthology I co-founded with USA Today Best Selling author Pauline B. Jones.  We had two basic motivations – helping a veterans’ oriented charity with a portion of the royalties each year and providing readers with a good cross section of SFR. This year our assortment of science fiction pets ranges from a three-eyed alien genie ‘cat’ to a tribblelike fuzzball capable of taking out a spaceship, with a few other futuristic dogs and cats thrown in. Plenty of human romance and adventure along the way too, of course! Here’s the blurb for the 2018 limited edition: Eleven original, never-before-published action-filled romances that will heat your blood and warm your heart! New York Times, USA Today and Award-winning authors S.E. Smith, Anna Hackett, Ruby Lionsdrake, Veronica Scott, Pauline Baird Jones, Carol Van Natta, Tiffany Roberts, Alexis Glynn Latner, E D Walker, JC Hay, and Kyndra Hatch combine their love for Science Fiction Romance and pets to bring readers sexy, action-packed romances while helping our favorite charity. Proud supporters of Hero-Dogs.org, Pets in Space™ authors have donated over $4,400 in the past two years to help place specially trained dogs with veterans.

The Universe Has A Speed Limit, And It Isn’t The Speed Of Light