All cards on the table.  Film and I have, apparently, not been getting along for the past year or so.  It could be that the films themselves are at fault, or it could be me.

On the other hand, I am sure that I am not the only film goer who has ever brought their personal life into the theater with them, so YMMV.

More recently, I re-watched the whole thing in PPV – it’s a fine example of the superhero genre film, Gal Gadot is just about a perfect Wonder Woman and, while I have some niggly questions about seeming plot holes, I’ll not let them diminish the accomplishment of this movie: female superheroes can carry the lead in a blockbuster film and there’s no longer any excuse for not having more of them.

(And James Cameron can shove his criticisms up his Avatar….)

Which brings me to Blade Runner 2049…the over-hyped, overly-long, goes almost nowhere as it surveys cardboard characters living in a revamped, tasteless future.

I have a loose definition of what it means to be human, a definition that doesn’t include genetics or a specific shape.  Going into Blade Runner, my “answer” was, and remains, that the Nexus 6 androids are “human” and have every right to attempt to survive and live out their lives.

Some discussion of the original film suggests that it is also a commentary on slavery, with, of course, the androids filling the role of slaves. (The ultimate slaves – demonstrably not human, with an expiration date built right in, which is better for the slave seller than the slave owner, btw.)

Blade Runner 2049 seems to have altered the fundamental questions of the original to focus on this question of slavery more directly. The main character ‘K’ is a Blade Runner, and an android…a new model that supposedly can’t go rogue…demonstrated by the seeming impersonality with which K “retires” older model Nexus 6 androids…that somehow still manage to be hiding out on Earth…despite a 4 year life span (original movie), 30 years of Blade Runners hunting them down and no way to naturally reproduce.  We’re teased with info about a “Nexus 8” that might have a longer life span…but, no.  The Tyrell Corp might have been working on such a thing, but I can’t believe it was ever allowed to be released, given all of the problems with the Nexus 6 model.

Until they do manage to reproduce. Deckerd and Rachel have a child;  Rachel dies and Deckerd hightails it to the hills (to protect the child); the child is spirited off to live with a renegade Nexus 6 colony.

The audience is encouraged to believe that ‘K’ might be the child, the encouragement itself revealing that this is just a red herring (how could a “new” model android possibly be the child of a Nexus 6 and a maybe human/maybe Nexus 6?)

What we don’t really see (it’s supposed to be implied) is ‘K’s “growth” through the film. If he’d experienced any real growth, the first thing he would have done is retire his condescending police chief boss.

We get some of that growth at the end, once they’ve finally brought Ford/Deckerd onto the screen but it is too little, too late, and is marred by the ever-present trope of having an insane super genius with his sadistic (robot) female assassin/sidekick thrown in.

Some other super genius of the future – another one with eye problems (I get it, eyes are the windows to the soul…their vision is flawed, they see things different than us, yada, yada…at least this time they didn’t get poked out) – has taken over the Tyrell corp following its bankruptcy and has a better idea for repopulating the Earth with HIS children (Ghengis Khan, step aside).

Aside: the single biggest mistake in this production was the mistake of not paying whatever it took to get Vangelis to reprise the score. The replacement is not worth listening to.

When did Blade Runner turn into a Bond film?  I honestly expected Jared Leto/Niander Wallace to say something like “No doubt you have realised the splendour of my conception. First a necklace of death about the Earth: 50 globes, each releasing its nerve gas over a designated area; each capable of killing 100m people. The human race, as you know it, will cease to exist. Then, a rebirth. A new world.”

In the first film, we’re led to care about the androids, we’re led to see them as humans…perhaps not yet as sophisticated, but certainly recognizable in their desires, their fears, their needs.  In 2049…we’ve got a grizzled old man who may or may not be an android (not), a handful of faceless victims and a killing machine that – too late – overcomes its programming.  (How?) 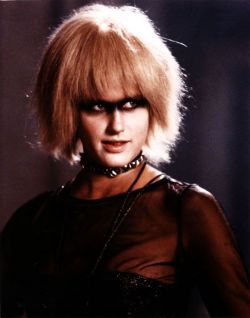 Here’s what I want to know: why do those Nexus 6 robots keep on coming to Earth?  Why?  We can turn to the first film and Pris for the answer:  “We’re stupid and we’re going to die.”

If new androids can hunt down old androids (and we can make as many new androids as we need) – why are there any Nexus 6 androids left on the planet (long enough to form secret colonies)?

I guess Blade Runner 2049 is what happens when all the smart people have left the Earth for the off-world colonies.

Harrison Ford recently stated to the press that “Deckard is human”.  Ridley Scott, the director of the original film, has said “No, he’s not”.  Fans have been going in circles to resolve the conundrum, but there’s really nothing to debate:  whether Deckard was born of man and woman or decanted in a lab, he sees himself as human – one discriminated against – but how is that different from hundreds of millions of real human?  It’s not.  We can debate how Deckard was born (endlessly), but the central message of the original film was “how you are born” (what color your skin is, what country you were born in, what sex you are) does not determine your humanity.  Whether Deckard’s memories are implanted or not (unicorn), they are real memories for him, and neither do those memories determine his humanity.  What he does with them does.

Stand on Zanzibar, John Brunner’s 1969 Hugo Winner for Best Novel, was one of those books I always meant to get around to reading, especially when I came across an essay that suggested it was a precursor to cyberpunk.

SPACE: The Gassy Highway That Connects Everything