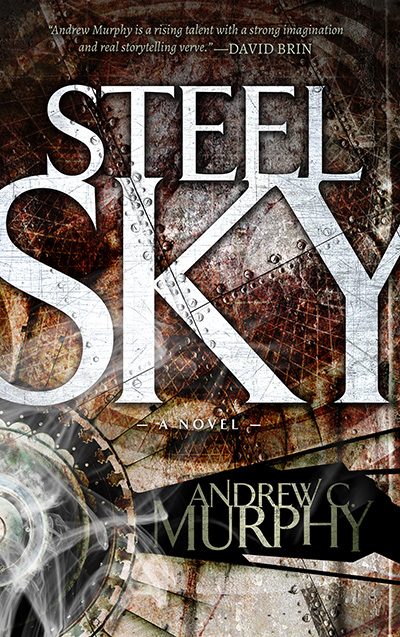 Imagine Alexandre Dumas crossed with Isaac Asimov and you will get a sense of my feelings upon reading Andrew C. Murphy’s impressive debut novel, Steel Sky (Ragnarok Publications).

I cite Dumas with specific reference here to the character of The Winnower, who wears an iron mask, but in this case to right wrongs in an underground society called The Hypogeum. The culture of The Hypogeum is encased in a steel sky, a dome which blocks the unknown outer world out. The steel sky is also a metaphor for the oppressive totalitarian regime in which even the seconds of a working person’s life are a form of currency which can be added to or removed if anyone does not perform up to scratch in the oppressive tasks they must undertake.

There are several interwoven stories in the novel, featuring a variety of well-drawn, engaging characters. The tale begins when an unknown individual steals from a museum a suit of powerful armor that once belonged to the former godlike ruler of The Hypogeum, Kobo. The armor imbues the wearer with abilities with which to fight powerful enemies and deliver what he sees as a kind of justice in the face of the oppressors.

Another key thread is the story of Second Son, would-be inheritor of the throne of his father, Orcus, the unofficial leader of this world. Second Son and his family are null class citizens, the highest societal ranking. Second Son, resentful at being pushed aside in favor of his now dead brother, is determined to obtain what he believes to be his inheritance at any cost. Along the way, we see in him the worst traits of humanity – for example, he rapes a woman with whom he has been obsessed and conspires to have her blamed for a disaster which kills hundreds of people for which he himself was responsible.

Love stories woven into the dramatic, often horrific events which take place in the 500-page span of the narrative. The first is between Amarantha Kirton, an electrician, one of the engineered people of The Hypogeum, and Cadell Tichener, a functionary for the political body that governs The Hypogeum, the Prime Medium. The second romance, if you wish to call it that, is between a mulcher and demimondaine (a prostitute, more or less), called Astrid and a physician, Edward Penn.

But my favorite relationship is the one between engineers Orel Fortigan and his friend Bernie Pratt. Given to debating scientific conundrums, they manage to get themselves into all kinds of scrapes, the worst of which is falling into the hands (claws) of the semi-human Rats, a carnivorous underground race. In some respects, the pair in their well-meaning naivety remind me of Hamlet’s friends Rozencrantz and Guildenstern, as portrayed in Tom Stoppard’s wonderful play, Rozencrantz and Guildenstern are Dead.

Next to The Winnower, the major key character is Image, an artificial intelligence who knows all and sees all, but for what ultimate purpose isn’t revealed until the end of the narrative.

Filled with meticulously wrought scientific speculation, and completely plausible political and religious structures, Steel Sky is both a rip-roaring adventure and a thoughtful prose narrative which is as exciting as it is beautifully written. The slight reservation I had about the “reveal” at the end, which I’ve come across many times before in science fiction, did nothing to detract from the unreserved love I have for this book, which was a deep pleasure to read from start to finish. I predict great things for Andrew C. Murphy.

Can indie authors – truly indie – be treated as artisans?

The Chinese Galaxy Award for 2020