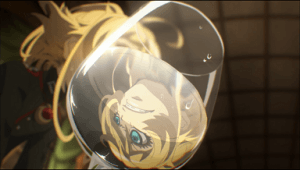 Saga of Tanya the Evil #4 – Back at the safety of the military academy, Tanya has a chance to make full use of her workplace combat skills. She kicks a potential rival off the promotion ladder, kisses up like a pro, and leverages her knowledge of our timeline to look like a genius by predicting the course of WWI, all the while appearing quietly competent and compassionate.

And she succeeds far too well again. Unfortunately, alternate fantasy Germany recognizes talent when it sees it, and she’s going back to the front lines. Though she did get the quick promotion to Hauptmann, and is on the fast track to the next rank if her idea works, so you can’t say she entirely screwed up.

And she has a huge mound of paperwork to get through before the new fast-reaction battalion is on its way, so she can put off the inevitable for a while. Or can she? It would be just her luck if Viktoriya turns out to be a highly efficient aide. 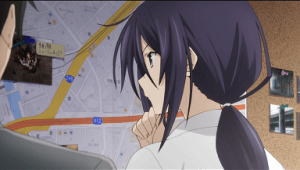 CHAOS;CHILD #3 – The pieces are coming together quickly this week. (I guess this is going to be a single-season show.) All the murder victims had paranormal powers of some sort which they used to further their careers. Could that be the motive, or is someone wiping out psychics indiscriminately?

Hinae Arimura’s unexplained work with the third murder victim suggests she may have had some kind of power too. Onoe’s sudden ability to “overhear” a whole wad of exposition looks suspicious in this light as well. And speaking of light, Mio’s question to Takuru about what he saw six years ago suggests he’s a person of interest above and beyond his investigation into the murders. The pillar of light created by Takumi might have woken special powers among susceptible people who saw it (and thus stolen a plot point from Boogiepop Phantom).

Meanwhile, Takuru realizes he’s kind of a jerk for spending months sulking in a trailer over his adopted father and sister trying to protect his feelings. Since there isn’t going to be much room for extraneous information in this show, the true nature of his parents’ deaths is likely to be important. 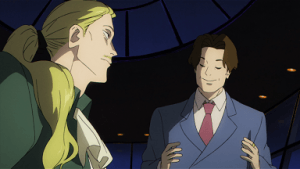 ACCA: 13-Territory Inspection Dept. #4 – Jean’s next trip is to Suitsu, where a century of autonomy has brought stagnation in the name of stability. Suitsu has walled itself off from the other provinces, keeping modern influences like electronics and slightly more representative forms of government away from its citizens. (You just know every noble family has a TV and internet connection hidden away somewhere.)

The way Jean is caught up in the attempted local revolution is awkwardly contrived, but it gives us the first look at how shrewd he really is. Though he professes no particular connections and seems apathetic toward politics, he plays the elite power game as well as anyone. He gets free cigarettes because he uses his position to obtain favors for Lotta’s tenants. He’s able to impose his own decision about what happens to Warbler and the other mercenaries.

Those extra-special cigarettes that Nino is tracking, though, imply favors at an unusual level even for him. Which actually does suggest that Jean might be working with someone who wants a change of government.

Lotta’s position as landlord is looking more and more suspicious as well. She was apparently given the job without knowing who she’s indebted to, but Nino does know who it is, and it seems to be the same person — or one of the same people — he’s reporting on Jean to. Someone has gone to a great deal of trouble to make sure Jean’s life is carefully controlled, and yet Jean may be plotting his way out of it right under their nose. 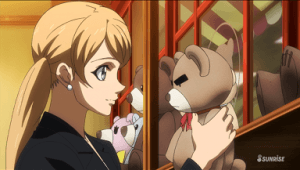 Mobile Suit Gundam: Iron-Blooded Orphans #41 – Orga, taking to heart what Naze told him about not getting further involved, is able to keep from lashing out after the destruction of Turbines. So Jasley, as the author’s avatar, decides that the way to make Tekkadan fight is to start fridging their love interests.

Of course this happens right after Akihiro finally develops a clue about Lafter’s feelings for him. One can’t blame him too much for being dense; the point’s been made many times now that most of the kids in Tekkadan have no narrative of how normal human lives and relationships work.

This goes double or triple for Mikazuki, who is apparently just now figuring out how babies work. (Atra would know, of course, having spent her earliest years doing chores in a brothel.) In addition to being vague on the biological details, he easily demonstrates zero aptitude on the emotional and social aspects. That’s going to take a while to take care of — at least that means there isn’t an untimely death in his immediate future.