If you like space operas in small bite sized chunks, then you can’t go wrong with Galactic Empires. 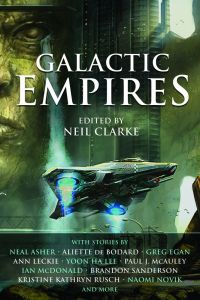 Galactic empires have been a staple of speculative fiction since the beginning. Some have ranged from the traditional concept of empires, with their grandiose titles and exaggerated 19th century European cultural mores, while others have adopted the concept of empire from other cultures. Then there are the de facto empires that can range from a democratic federation of planets to a single monopolistic culture that permeates ever aspect of an individuals life.

The anthology Galactic Empires edited by Neil Clarke focuses on this common trope by featuring short stories from some of the biggest names in the genre and their take on the concept. I was lucky enough to get a review copy so I am going to share some of the stories that stood out (for better or worse) for me with you. If you’re ready, lets strap in and take a tour of what imperial hegemony has brought us…

“Night’s Slow Poison” by Ann Leckie: Set in the “Imperial Radch” universe, Inarakhat Kels works security on a transport that takes people across the Crawl on a months long journey to reach his home planet, Ghaon. The Crawl has managed to avoid the Radchaai advance by destroying any ship that attempts to traverse it too quickly. This means, however, that anyone wishing to reach the isolated planet has to take the long way and go as slowly as possible. Thus cabin fever becomes the real enemy…and makes you blind to the real threat.

I always feel like I’m not smart enough to read Ann Leckie…and I mean that as a compliment. There seem to be layers to her writing that aren’t always obvious and you often have to pick it up from subtle clues or your own deductions, much like a Grant Morrison comic.If you liked Ancillary Justice then you will enjoy this story too.

“All the Painted Stars” by Gwendolyn Clare: An alien fighter pilot saves another alien ship being attacked, but loses its ship in the process. Forced to seek refuge on the ship it saved, our alien friend absorbs some DNA from those it rescued and morphs into them. Turns out they are human and they are piloting an alien ship built by the now dead Brights to some unknown location and are doing a piss poor job of it. Our alien protagonist, however, couldn’t care less. It has lost its purpose in life with the destruction of its ship and it needs to either find a new purpose or just end it all.

I couldn’t help but think of the 1982 film,The Thing. The alien’s ability to transform into anything organic it comes in contact with reminded me a lot of the alien from that film, but the alien in Clare’s story was relatively benevolent. Granted it didn’t really care about what the humans were trying to do, but it also wasn’t disemboweling them, so it can’t be all that bad. If you want a story that portrays shape-shifters in a good light, check this one out…just don’t expect anything new added to the galactic empires trope. This was one of the weaker entries in regards to the overall theme of the anthology.

“Firstborn” by Brandon Sanderson: Dennison is the younger brother to High Empire’s conquering hero, Varion. Forced by his father to enter a career in the military, Dennison fails in almost anything he puts his mind to and despite how badly he screws up, he is never allowed to quit. When Varion, however, turns on the High Empire, Dennison may be the galaxy’s only hope in defeating the unbeatable warlord.

Growing up an overweight geek, I always had a soft spot for failure. Life is nothing like the movies and is often filled more with disappointment then success. Still if there is one positive thing disappointment can do, it can toughen you up. Those who know what it is to lose and yet survive can handle failure a lot better then those who never had to work for anything in their life. This story taught that message and gave it a cosmic twist, even if the High Empire reminds me too much of an interstellar British Empire.

“Riding the Crocodile” by Greg Egan: In a future where people are immortal and your every need is taken care of, an old married couple (who don’t look at all old) decide its finally time to die. Before they do, however, they want to do something big and they decide to find a way to contact the Aloof, an unknown alien race that has resisted every attempt to get them to join the multi-species Amalgam. In their quest they soon discover a way to eavesdrop on the isolated aliens and perhaps even find a way into their sector of space…but will their marriage survive it?

Something that has always bugged me about immortals is how most people seem to think that living forever means you lose all of your morals. I like stories that subvert that cliche and provide us with immortals who still maintain aspects of their humanity. Granted there are some things we lose on the way. For example, when you can’t die unless its by your own choice, taboos on suicide go out the window. If you want to read about the galaxy’s best power couple, check this one out.

“The Muse of Empires Lost” by Paul Berger: Jemmi is a strange girl who lives in the shell of a giant space mollusk. She can get people to do things she wants…but she can hurt people too if she isn’t careful. Then one day, another space mollusk stops by to…well…um…mate and Jemmi meets someone just like her named Yee. He tells Jemmi more about their powers and how he was responsible for creating “Cosmopolis”, a technological utopia that colonized the stars before it was destroyed when the machines stopped. Trapped on the mollusks, Yee seeks to find a still working shuttle craft so he and Jemmi can get planetside, kickstart a technological revolution and resurrect his old empire. Jemmi, however, isn’t interested in leaving her home…

A couple things I want to point out here. First, SPACE MOLLUSKS!!! What an insane and awesome idea. That alone is worth a look at, but another thing to consider is what Yee and Jemmi actually are. Berger never comes out and says it, but I couldn’t help thinking vampires, but they are certainly better than the traditional kind. So many pop culture vampires are dismissive of humans and they routinely plan to destroy us all…which is like people who enjoy beef wanting to wipe out every cow in the world in a single stroke. It makes sense for vampires to want to help humans up because what is good for humans is always good for their shadowy masters. Anywho, if you like stories with a creative setting, then I can recommend this story.

“The Colonel Returns to the Stars” by Robert Silverberg: A retired Colonel is called back for one more mission when he discovers that his old protege, who everyone thought was dead, is now alive and has taken over a planet that seeks independence from the galaxy-wide Imperium. He sets out to confront him once and for all…and that sums up this story well enough.

I feel bad saying this about a Silverberg story since he is a legend of speculative fiction and wrote Roma Eterna which I thoroughly enjoyed…but I really didn’t like this story. It was well-written for sure, but it was also boring. The Colonel kept talking about stories that sounded a lot more interesting then the story I was being told. Elements are also brought up, like an alien-built FTL gateway, that really don’t add to the overall story. Out of all the entries in Galactic Empires, you can skip this one. Go read something else that Silverberg has published.

“The Impossibles” by Kristine Kathryn Rusch: Kerrie is a public defender at the InterSpecies Court for the First District. It is a soul-crushing job where the complexities of the multi-species Earth Alliance mean there are very few winners among those accused of breaking a species’ law. Still Kerrie only has to work a little longer until her law school loans are finally paid off…but when a case comes across her desk that may actually end in an acquittal, Kerrie will take a shot to save someone’s life and actually win for once.

This was…the best short story I have read in a long time. Maybe it was because it reminded me too much of my own career as an attorney or maybe I am discovering I really like Rusch as an author, but this story had a major impact on me. There wasn’t any violence or great discoveries, just someone trying to do good in a system that rarely allows you to do it. Regardless of whether or not you like space lawyers, go check this one out.

“Seven Years From Home” by Naomi Novik: Ruth Patrona, an agent of the Confederation, heads to a planet where two human cultures are close to war. On one side are the Esperigans, who are normal humans with normal sci-fi technology, and then there are the Melidans, who were once human colonists who used genetic engineering to adopt their bodies to their new planet rather than terraform the planet to fit their needs. Ruth’s goal is to insert herself into Melidan society and help them fight the coming war against the Esperigans, who are also getting help from another Confederate agent, with the goal of weakening both sides until they have no choice but to join the Confederation to end their unwinnable war…at least until Ruth goes native.

The best way to describe this story is to think Avatar, but better written. The overall story isn’t as cliche as that film and the Melidans aren’t as “cute” as the Na’vi…in fact they are down right nasty when it comes to fighting their enemies. I also like how the story is written as a tell all memoir about what really happened regarding Ruth’s time with the Melidans. Definitely worth a read.

And that is all I have to say on Galactic Empires. On the whole, I liked it. There were only one or two stories I didn’t enjoy, many that were entertaining and a few that I would tell any SF reader to check out. Admittedly I thought the best stories were the ones that avoided the traditional notion of empire since it showcased some creative attempts at unifying the galaxy. If you like space operas in small bite sized chunks, then you can’t go wrong with Galactic Empires.

On Genre Diversity, or ‘Why Mark Charan Newton was Right’