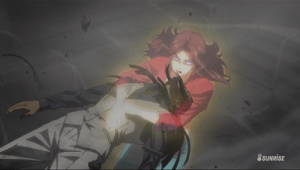 Mobile Suit Gundam: Iron-Blooded Orphans #39-40 – Iron-Blooded Orphans returns with a reminiscence of the early days of Turbines, finally spelling out exactly what Naze meant about not all the women around him being his actual wives. This makes two things clear: first, that there is no problem at all if Lafter wants to leave to be with Akihiro; and second, that something terrible is about to happen.

And terrible it is, in all senses of the word. Jasley leverages Iok’s sense of honor and inferiority so well that when Naze tries to surrender, Iok has already made up his mind that he didn’t come all this way to avoid a massacre. And a massacre it nearly is, except for Shino and Akihiro working out a way to help out with an absolute minimum of plausible deniability.

Orga is already close to his breaking point; the loss of his patron is likely to be the last straw. At this point, Tekkadan’s best hope is for him to be distracted by the revolution within Gjallarhorn that Fareed is about to kick off.

It’s still a grim universe, but not one entirely without hope. There’s hope, for instance, that Naze managed to take out Iok before the Hammerhead bounced off the command ship. 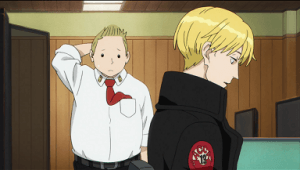 ACCA 13-Territory Inspection Dept. #2-3 – Reading between the lines of the heroic myth at the beginning of episode 2, the provinces of greater Dōwā still recall that they are conquered states. When they rebelled a hundred years ago, they were able to force the central government to give them more autonomy. The Inspection Department exists to make sure the rulers are never humiliated like that again.

Jean Otus is someone important enough to have been under surveillance his entire life. It’s not clear whether he knows it, but a lot of the other elites seem to. That story about him being suspected as a rebel agent may be true for some of them, but there must be some bigger reason. Maybe he’s the offspring of attempted revolutionaries, and this is the kind of police state that never trusts a family afterward? Is he an extra heir, squirreled away in case of emergency?

At the big shindig in the capital, the crown prince discovers that he has been faked out by the king or someone close to him. What was the point? Making him reveal his plans? It seems like the prince is the one who wants to do away with ACCA, so who’s protecting it?

ACCA has a fine stew of intrigue and paranoia going, and it’s only episode 3. If it can keep this up, I expect it to be one of the best shows of this year. 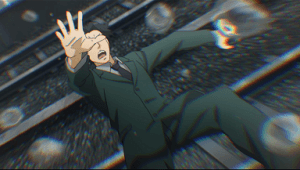 Saga of Tanya the Evil #2-3 – In Tanya Degurechaff’s previous life, she was a ruthless and efficient salaryman in modern-day Tokyo. Killed by a disgruntled ex-colleague, the salaryman meets the Supreme Being, and it degenerates into a contest in who can be the biggest jerk. Thus he is reincarnated as Tanya Degurechaff, forced into a life of noble faith-inducing struggle.

Or that’s the idea, but Tanya is a tougher nut than that, and the Supreme Being is going to have to keep meddling to force her onto the straight and narrow. (Even though she retains memories of her previous life, Tanya appears to have accepted her current identity, so I’m going to stick with female pronouns.) Tanya hopes for an easy training tour followed by a cushy life in a teaching unit, but winds up a hero and then a test pilot for mad science.

Tanya the Evil is able to make Tanya sympathetic enough to keep you caring what happens, but not so much that you can’t keep cheering every time her cunning plan for a quiet career is foiled. Next up is another stint back in the capital, but it looks like the Supreme Being has the next nasty surprise all lined up. This definitely deserves more watching. 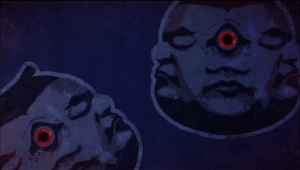 CHAOS;CHILD #2 – A whole episode without a creatively gruesome murder! That’s because CHAOS;CHILD has a whole lot of plot packed into this one. Takuru wants to confront Hinae about her presence at the scene of the last murder, but instead listens in as she talks to a detective who is unofficially investigating the case. That detective in turn is connected to a group which includes the mysterious anchor of an Internet newscast, which has picked up Takuru’s conjecture that the mysterious stickers found near all the murders are an important clue.

That same guess leads Takuru to have a camera set up at a possible scene of the next murder, where it does capture an attack — on Nono, trying to remove the camera. Are the stickers there because someone predicted a murder, rather than being placed by the murderer?

Adding to the possibility of extremely tangled causality is that Nono and Takuru’s adoptive father looks suspiciously familiar if you’ve seen Steins;Gate. If that’s the same character, he’s much older than he should be, but Steins;Gate was about time travel…

There’s definitely a paranormal aspect as well, given the recap of Chaos;Head and the fact that the last murder victim was known to have some kind of power. And Takuru’s…vision? memory? and his illness around the stickers is a big hint that he has a power himself. 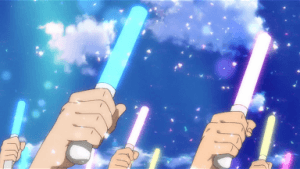 Idol Incidents #2 – An evil corrupt local politician is allowing theme park waste to be dumped entirely legally on his land. After a test of courage to win over the idol party in power in that town, Natsuki leads everyone in a big party where they clean up the dump, put on a show, and put the evil thugs in their place!

Okay, this is a terrible show. This doesn’t mean it isn’t still a significant show. It deserves a look at its political thesis before we leave it behind, especially since it is completely in tune with the rest of the developed world. It is nothing less than Japan’s own version of Trumpism.

As in the US, many people in Japan look back on a time when it seemed like the country was more dynamic and prosperous. In Japan’s case, that ended when an asset bubble collapsed in 1992. The rubble of failed theme parks is emblematic of the economic stagnation that followed (and this isn’t the first time anime has used that symbolism — see Spirited Away, for instance).

Calling the villains the Gerontocracy Party speaks of an attitude that the whole system is corrupt and needs someone to clear it all away. Someone completely untainted by politics, who will just make fun stuff happen without all the tedious business of compromise and consultation or having to respect actual laws and property or caring about what anyone else thinks. Sure, they haven’t gone for total nationalist jingoism yet, but I expect it will get around to having Natsuki face down misguided and/or evil foreigners. I wouldn’t be surprised if it takes an ironic twist and decides to throw in a caricature of Trump to bash.

Leaving Idol Incidents by the wayside, that gives us four different flavors of grimdark to follow the rest of the season. And what became of Little Witch Academia, which would have been a welcome dose of joy to balance it out? Unfortunately, the global streaming rights have been bought by Netflix, which means most of the world will have to wait at least until the end of the season to watch it legally. (It’s at least being simulcast in Japan, which I believe is a step up from what happened with Knights of Sidonia, but still ironic given that Netflix is famously against artificial delays.)

To add insult to injury, if you express your unhappiness to Netflix customer service, they will claim that this is the fault of the owners of the show not allowing it to be distributed in other regions. This is probably their standard script for when a show is available in one region and not another, but still, very bad optics in this case.

The upshot is that Little Witch Academia will never have a full chance to be part of the global anime conversation. I’m sure Netflix paid the rights holders more than enough to overcome any philosophical objections, but it’s still a loss both to the show and to anime fandom.