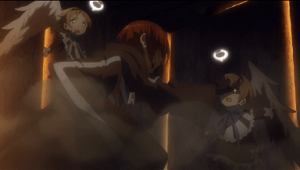 Magical Girl Raising Project #8 – You know a show’s gotten dark when the most shocking twist it can pull is to reveal that one of the regular characters is secretly a totally stable and well-adjusted person with a happy home life. And it isn’t the product of a charmed existence, either; Top Speed had her juvenile delinquent period, but she chose to give it up for a more mundane life, and it’s left no mark on her. As she said to Ripple before, anything she can run away from doesn’t bother her.

But Calamity Mary has come up with something Top Speed can’t run away from. She can’t ignore people in distress. And that will probably be her undoing.

She’d be the seventh person to die, after two more were eliminated this week. Weiss’s death was inevitable once she kicked Nana out of the hideout and stayed to fight by herself, but taking out Yunael along the way was a surprise. Now Sister Nana and Minael have both lost the person closest to them.

If there’s one bright spot this week, it’s that Snow White has gained a new partner, and one who’s probably going to survive a while. 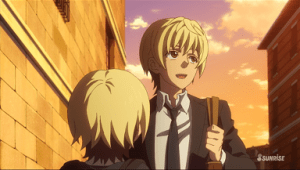 Mobile Suit Gundam: Iron-Blooded Orphans #33 – Yeah, Fareed knows Rustal was behind it all, but has no way to prove it. So he continues to gather his strength and extend his reach, all the way to Mars now. He gets Tekkadan removed from Earth, but in exchange, he offers them the chance of having power over all of Mars.

I think it is meant to be obvious both that Fareed is setting Orga up to take a fall for him and never intends to give Tekkadan that power, and that Orga would be terrible at being the boss of Mars anyway. But he sees a chance to take more control of his destiny and provide for his comrades. Merribit and Kudelia both have obvious reservations about the idea, but they’re not part of the core of Tekkadan. On the other hand, Orga might actually listen to Naze, or, if that fails, the head of Teiwaz.

The people who’ve been with Orga from the beginning are all for it, except for Takaki, who has concluded that he’s not cut out to be a mercenary. He doesn’t want to see more subordinates die, and he doesn’t want to uproot Fūka from a life where she’s thriving, so he stays behind on Earth, cutting ties with Tekkadan. (Until a dozen episodes or so from now where it’s going to suddenly be necessary to find a contact on Earth, I’m sure.)

Ironically, Takaki has managed the thing that so impressed his buddy Aston about Chad a couple episodes ago – he’s gone from a throwaway kid to someone who can put on a suit and tie and be acceptable in polite company. 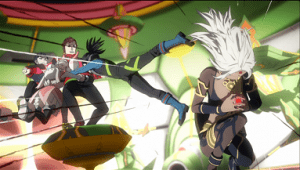 BBK/BRNK #20 – With everyone finally reunited, it’s almost time to celebrate, but here comes Team Asia for one last attempt to stop them! So it’s time for Ōbu’s crew to join up once again and fight. Now, with their newfound understanding of how to fuse with their bubuki, they can power up to even greater strength…which turns out to be pointless, because their opponent is quite literally falling apart.

Ryūki (or Justin in the English subtitles; I have no idea why he was singled out for renaming) fancies himself a clever plotter who can stab Guy in the back and take the ultimate power for himself. He was never going to get far if he couldn’t keep himself from bragging about it in advance, and doing so is the final push his team needs to find the courage to revolt.

That leaves Guy with the European and American teams, and he has to imprison the head of one to motivate the other. He’s running out of minions fast. But then Migiwa appears, and perhaps that gives him another way to get what he wants.

Then there’s the flashback about Moses and Leticia. Um. I appreciate that BBK/BRNK wants to show a diverse array of characters, but it keeps coming out wrong. Like, I would love to tell people about this show being the first anime I’ve ever seen acknowledging that black people exist in Europe, but we finally get some real focus on Moses, and the story is about him being “bought” to serve Leticia. And I’m not even sure if the awkward overtones about slavery are intentional, or if the writer was starting from an analogy about the Premier League and it went badly. 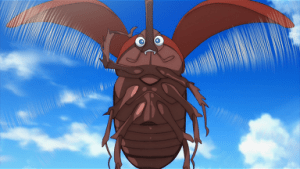 Cheating Craft #7 – So there was some relevance to last week’s episode – Mumei and Gennu had some kind of battle, which Mumei lost, after which he fled in shame to some dive where Kōi tracks him down. They head for the prison where Mumei’s father is kept in the hope of unlocking more of the power of the martial-arts technique Mumei uses, but find themselves facing a superpowered guard instead.

I’m going to guess that the guy in the mask is actually Mumei’s father, because if the Shokatsu Technique is passed down only through the family, who else would be taunting him with mastery of it?

The exam of the week gets short shrift, which is a shame because Cheating Craft‘s best moments are still when it goes for the completely ludicrous test scenarios. This week’s cybernetic brain had a very classic Star Trek vibe to it. I was just waiting for someone to confound it with a logical impossibility. 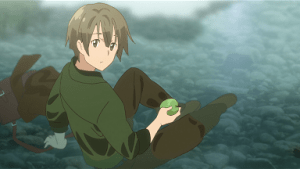 Izetta: The Last Witch #8 – Through a combination of clever spycraft and genuine incompetence, Rickert persuades the simple folk of Eylstadt that he’s just a student returning home to help the war effort. All goes well until the infiltration of the old castle, when something reacts to the witch’s blood he’s brought and nearly brings down the castle. Then it turns out he’s already met the royal guard. Then it turns out the simple farmer the spies have taken advantage of might be in the same business.

By the laws of action stories, Rickert isn’t dead unless and until they find his body. I wouldn’t be surprised if he was wearing some kind of concealed ballistic vest. In the meantime, the end result of his adventure is to free a McGuffin which will be some time finding its way to any of the major players.

Back in Londinium, Finé and Izetta attend a fancy ball, only to find that Berkman has shown up with a vampire. And a very inefficient vampire at that, who avoids the easy strike on a major artery and goes for a faux kiss instead, almost as though she’s aware that she’s performing for the straight male gaze.

Now the Germanians have some of Izetta’s blood, they can do something or other nefarious which I’m sure we’ll see next time. Maybe impersonate her? We’ll see next week.