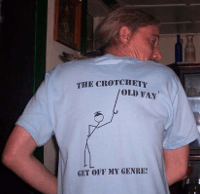 I’ll start off by admitting that I’m a crotchety old fan.  Despite my affinity for SF, I don’t much like change.  Reading about the future is one thing.  Traveling there as we all are is an entirely different matter.

I’d be just fine if they’d leave the things I’m familiar with alone.  Go ahead, update the program with bells and whistles, make it more efficient, but dammit, leave what I already know how to do with it alone.  Let me have a button that says Use the New Version/Revert to the Old Fogies Version.

I get why they don’t (its mostly ageism – we’re so decrepit we won’t notice the changes and even if we do, who cares – we’re old), but sometimes a new way of doing things comes along and it is Just. Not. Right.

Take the internet as a perfect example.

Why are we all still individually paying for it?

It watches and records us without our consent.  Data miners have found all manner of ways to entice us into revealing even more behaviors and data through the internet of things.  Those useful, free apps and games aren’t really free, are they?

Aggregated data and its derivatives are both earning and saving business concerns billions of dollars annually.  And we’re just in the infancy of this technology.

Bad enough, but when you consider the sneaky, smarmy, underhanded and deceptive ways that these companies sneak data gathering into your life (stick this device in your car and we’ll reduce your insurance rates: sign up for this supermarket discount program and get 10% off all your purchases!  Aren’t we wonderful! For giving you stuff! For free!!!); commercial satellites are now used to monitor parking lots; theme parks want your bio metric data (and are reluctant to tell you that’s what they are doing) and huge data farms – second only to the NSA’s – are mining away, looking for patterns, connections, trends, so that more, better and faster ways can be devised to separate you from your money.

Sure, benefits do trickle down to the average consumer such as lower prices resulting from more efficient logistics, but you better believe that the lion’s share is going to those corporations gathering the data, and not you, the SOURCE of the data.

I could rant about the whole enterprise as being an inhuman one, a dangerous technology that will bite us in the fundament (and already has), but, stupid monkeys that we are, we need to get burned before we stop playing with fire (burned more than once because “oh, that fire is the same as the other fire.  I get it now.”), so instead I’ll focus on addressing something that we might be able to change.

Why in the hell are we all paying for the privilege of letting corporations figure out more and better ways to separate us from our hard-earned money?

Most of the mining still takes place over the web.  We should demand that if we must (in)voluntarily participate in this intrusion into our personal lives, the least the miners could do is pay ALL of the costs associated.  High speed, broadband internet, for EVERYONE, for free.  Access wherever you go, special networks for specialty applications and a commitment (with dollars) to continually improve and upgrade the infrastructure.

Before cable, television was free.  You bought a box and paid for the electricity, but every single second of content was completely free.  Advertisers didn’t insult us by making us pay to watch their ads.  Now, we pay for the privilege of being advertised to, both with television, satellite radio and the net.

Fairness dictates that if we are to be lab rats, the least the researchers could do is not insult us by expecting us to pay for the privilege.