I’m at Boskone this weekend, hanging out with the fans, loquaciously displaying my intimate knowledge of arcana  on several panels and availing myself of various perks offered by this long-running (53rd year) convention that was launched as a bid for the 1967 Worldcon.

It’s operated by the New England Science Fiction Association (NESFA), one of the longest running fan clubs in the country.

One of the things NESFA does is clear out their library and make the clearances available on a freebie table.  Last year, someone snagged a bunch of large-size Analogs out from under my reaching hand (‘sigh’).  This year I was one of the first ‘gleaners’ to hit the table and was rewarded with:

several D series Ace Doubles; a good-sized stack of early Locus fanzines;  same for File 770; a handful of Groff Conklin paperback anthologies (filling in a couple of gaps.  The paperbacks are shortened versions of the hardback anthologies Conklin produced over the years.); a couple of Lee & Miller hardbacks; a NESFA anthology of Lester Del Rey shorts (edited by our own Steven H. Silver); the remaining issues of Galileo magazine that I didn’t have (complete run now!). (Galileo was a “semi-prozine” from back in the late 70s); a few issues of Infinity digest magazine, and a smattering of this and that interesting looking items.

Over on File 770, one of the current discussions is centered on “pay the writer”.  I’d probably feel more guilty about FREE BOOKS except – free books.  And the reality is that most of what I pick up are either replacements for worn out items I already have, long-out-of-print items one can only buy used or things that I’d probably not buy anyway, but now have the opportunity to check out absent that money-barrier thing.

That’s my justification and I’m sticking to it.

On the convention front:  Fridays (until 6 pm) at Boskone are FREE and are an excellent opportunity for fans to check things out before committing to purchasing a membership.  So yesterday I, along with my fellow panelists were Free to the Public.  (That might make me feel cheap until you consider the company I was in.)

The first panel (acquiring art for publication was the subject) was a pretty well-attended panel and a pretty informative discussion, that free-wheeled off into creative commons and other IP issues.  Panelists included an author who does her own covers and has received high praise for them, an editor for NESFA press, a voice actor (who added breadth by bringing in comparisons to voice/recordings).

The panel was three guys and one woman.  The audience was split just about 50/50.

The second panel was a bit of a disappointment at first.  The subject was fanzines – what they are, where they came from, where they are going.  It was disappointing because the line for registration was going strong and likely as a result, we ended up with only three attendees.  We also ended up without our moderator (who apparently was feeling a bit ill at the time).  But – lemons, lemonade.  So we asked our three attentive attendees to pull their chairs up to the table and we tore into the subject in a very intimate manner. 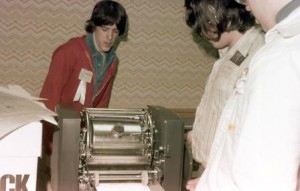 I’d brought along a good selection of ‘zines for display as well as a pic from 1979 of me working a mimeograph machine (pretty sure it was an AB Dick, but model number I couldn’t tell you.  We talked about typewriters that cut the ‘O’s out of stencils, discussed slip-sheeting, whether or not fanzines have lost something by going electronic (yes, they’ve lost the tactile, maker-like qualities, but they’ve gained ease of access and production, so that’s a trade-off) and had a grand time educating and informing our audience (two women, one man), almost running over our time.


(Note: issues displayed are not necessarily those brought to the panel.)

I had so much fun I’m thinking of buying a mimeograph….

Registration, once it got moving, moved pretty quickly.  I stopped in at the Ireland in 2019 Bid table and picked up a pre-supporting membership;  James Bacon (who was on the fanzine panel) extolled the virtues of the Emerald Isle and almost convinced me that Worldcons that don’t take place in my backyard are a good idea.  I’m very conflicted over this.  Worldcon has that word “world” in it, but I don’t yet own my own corporate jet, so am still convinced that the ideal situation would be to retain the name and then host every Worldcon within a two-hour drive radius of southern New Hampshire.  Yes, it’s a selfish position to take, but I’m not that worried about it.  There’s very little chance that my personal wishes will be reflected in site selection.  Anyone else who feels the same way will be arguing for their own backyard (selfish bastards!), diluting the vote and handing the win to some country that’s never had a Worldcon before.  Ah well.

I’ll conclude by noting that my unofficial survey of attendees continues to reveal an ever-increasing diversity among them.  Boskone has apparently done a pretty good job of outreach.  You all should think about attending, it goes on for two more days.