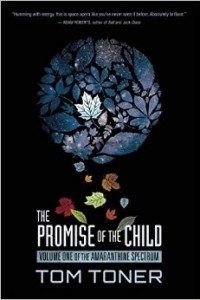 I am a reader who really enjoys good world building. Being able to learn about some fascinating culture or people, even if they are fictional, is something that keeps me going and often allows me to overlook any flaws the book may otherwise have. With that in mind, lets take a look at The Promise of the Child by Tom Toner, first book in the Amaranthine Spectrum.

I can’t really talk about the plot without first discussing the universe of The Promise of the Child. The story is set in the far future (the 147th century to be exact). Humanity has long since ceased to exist and has evolved into dozens of different sub-species. The most powerful and most human-looking are the Amaranthine. These were (presumably wealthy) humans who received longevity treatments and thus are no longer susceptible to old age or diseases. While they can still die from injuries, immortality brought some rare gifts, including unlocking new abilities as they got older like teleportation, telekinesis and the ability to shoot fireballs from their hands. These wizard-like beings have carved out a light-years spanning empire centered around Earth (The Old World) and its neighboring systems, but askew habitable worlds for artificial ones they carve out of the cores of dead worlds. Its a pretty impressive society…that is slowly withering away. After several millenia, Amaranthine often suffer from dementia and thus become pretty useless. With no new Amaranthine being born, there are less and less people around to manage the empire. Plus you get the feeling that the lost of their mortality have given the Amaranthine nothing to live for. Most Amaranthine we run into, even the ones that are not mad, seem on the whole disinterested in the events happening in the known universe.

The rest of humanity is categorically known as the Prism. Some are described as being pale-skinned, elvish midgets while others look like color-changing giants. They are more primitive and war-like then the Amaranthine with societies that appear even feudal in nature. Nevertheless, they are where the world-building of The Promise of the Child really shines and through them Toner subverts many popular tropes. For example, its not unusual for worlds or races to be subdivided under different nation-states instead of being lumped into one world government or vast interstellar federations. The different species themselves have racial subdivisions (some real and some imaginary). There is even one race of Prism that is carrying out genocide on another part of their race just because of the color of their skin. As a whole, the Prism are hired by the Amaranthine for a variety of purposes, especially militarily. In fact the Amaranthine have become so dependent on them for protection they have begun allowing them to settle into their territory, reminiscent of the final years of the Western Roman Empire as Germanic tribesman increasingly filled the ranks of the Roman military while they settled inside their borders with Rome either unwilling or unable to do anything to stop them.

In fact, how Toner presented this universe at first was one of the best parts. He didn’t hold the reader’s hand and have characters explain what every piece of lingo meant or how this futuristic device worked. This avoided a lot of the “As You Know, Bob” moments and allowed the reader to piece together the larger world as he delved into the story. It reminded me a lot of how the world-building was presented in Alastair Reynolds’ Revelation Space, which is one of my favorite space operas. Sadly, about 100+ pages into the novel, you start seeing a lot of info dumps that start explaining some of the more mysterious aspects of the background. I can’t prove it, but I can almost feel Toner’s editor telling him to make things easier on the reader. Nevertheless, if you don’t mind reading in depth details about fictional worlds (like I do) then this won’t be an issue.

So with such amazing world-building going on, the story must be great as well, right? Well actually the story is only okay. The central conflict is that someone known as Aaron the Long-Life is attempting to become the new Emperor of the Amaranthine Firmament with the help of his supporters, collectively known as the Devout. You see the Amaranthine are ruled by the oldest among them. Now if this was just a ceremonial position, I really wouldn’t have an issue with this, but apparently the Emperor does have some real power which is enough to actually tie the hands of those few Amaranthine who work in the government when they attempt to resist Aaron because the current Emperor is too busy talking to himself on his own personal wasteland of a planet. Now maybe such a stupid form of government makes sense given the Amaranthine’s “do nothing” attitude that the story presents, but presumably this system was established when the Amaranthine still had some spunk left in them and were the undisputed masters of the galaxy. You think they would have put a safe-guard in to prevent just such an occasion, but to be fair, this is a minor nitpick.

The story unfolds from the point of view of several different characters of varying species. Personally I found the chapters featuring Lycaste to be the most interesting. The post-scarcity world that Lycaste inhabits is fascinating to behold (everything you need literally grows on trees) and with our hero being a short-sighted introvert, his ignorance of his planet is believable and thus helps you naturally learn more about it. Lycaste himself is a sympathetic character with strengths and flaws that help flush him out and make him more realistic. Meanwhile, Lycaste’s varied and unique supporting cast helps him through his character’s arc. The other point of view characters, however, didn’t have serious arcs like Lycaste. Often it felt more like I was on sight-seeing tour with them then actually seeing them develop as characters. Granted Toner’s universe was breathtakingly beautiful in a raw, chaotic sort of way, but I found it hard to care about these characters and the problems they were experiencing.

The ending was also a tad disappointing, but I will try not to spoil it. I can at least say that it ended on a cliffhanger, which wasn’t unexpected since we already know, and the twist that came with it was spoiled on the back of the book. I’m not joking. If you read the back of the book, you will be able to guess the twist ending with surprising accuracy. It honestly wasn’t much of a reveal and if it could be so easily ruined then its perhaps in the best interest of the publisher to revise the back cover for later editions.

Although I have been highly critical of The Promise of the Child in the last few paragraphs, you shouldn’t leave this review thinking I didn’t like the book. In fact I enjoyed the experience a lot and do want to learn more about Toner’s universe, especially what happened to Lycaste. Although the story could be better, the overall theme of the book was well done and can best be described by the title of the book itself. The “promise of the child” refers to a parent’s hope their child will be better than them and their disappointment when they make the same mistakes as their sires. Toner’s novel is about the future of humanity and despite having off-world colonies, magic like abilities and far-reaching technology, we still really can’t help just being human. Thus The Promise of the Child provides a warning about the future that we should all take seriously.

Review: Otto Von Trapezoid and The Empress of Thieves by Jesse Baruffi

A profile of the influential Spanish SF magazine Alfa Eridiani