The episode opens in the lab, with Leonard adjusting some equipment. Sheldon comes in and announces he has some terrible news, but he needs to soften the blow before delivering it, so he offers Leonard a compliment. A Swedish team of physicists is attempting to beat Leonard and Sheldon to the punch on the super fluid vortex experiment to prove their hypothesis from last season. 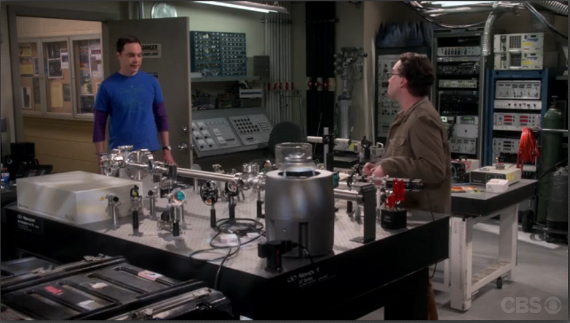 While having an independent team confirm the results of your experiments is good, having that team beat you to the proof of your own hypothesis is less than optimal. Sheldon is disappointed that Leonard responds in a rational and adult manner, and is concerned that he may have softened the blow too much so he insults Leonard. Unfortunately, they aren’t able to perform their experiment immediately because they are waiting for their liquid helium to arrive and it is on back order for a month. Apparently, Sheldon hadn’t been paying attention to their experiment because when Leonard mentioned it was on back order, Sheldon complained that Leonard hadn’t softened the blow, so Leonard compliments Sheldon’s shirt. The two go to find Barry Kripke, who apparently controls the university’s supply of liquid helium. 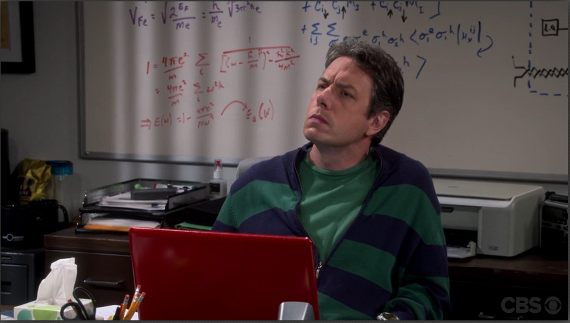 Kripke can’t provide them with any because he needs what is in stock for his own experiment, although he claims he;s going to use the remainder of the liquid helium to blow up balloons (unlikely, since helium is only liquid at temperatures below -452.2°F/-269°C). Any chance they have of gaining liquid helium for Kripke goes out the window when Sheldon is honest about the chances of him sharing with Barry if their positions were reversed.

The next step is to complain to Howard and Raj. Raj points out that you can buy helium at Party City, although they don’t actually stock the liquefied version. Howard knows a guy who can provide illicit liquid, but they can’t ask too many questions. Naturally, the two fire off a bunch of quite pertinent questions, ending with Sheldon asking how many it too many,

Bernadette tells Penny that Stuart actually went on a date the night before, based on a dating app he’s using. 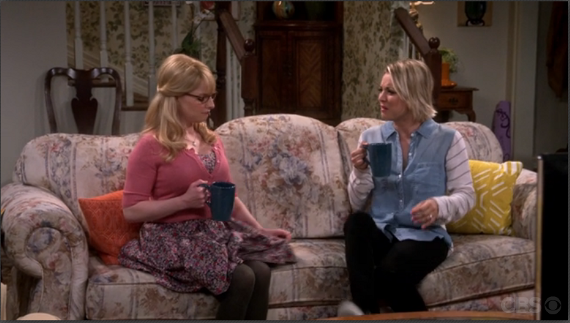 Penny suggests that they could use the app to find a date for Amy. Stuart enters and describes the dating app he’s using, which has so far used to go on dates with two women. The app shows everyone within five miles who is using the app and you can give them a thumbs up or a thumbs down, although Stuart has yet to use the latter option. 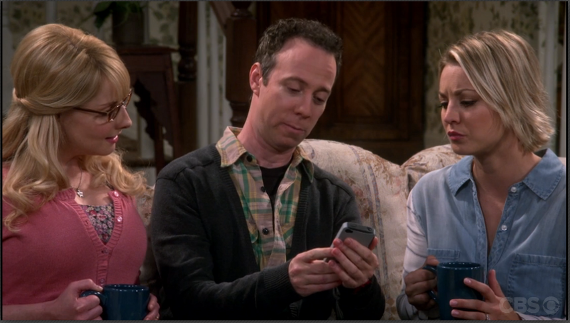 Leonard has received a response from the liquid helium guy who can make a delivery that night, although one of Sheldon’s minor peccadilloes is that he doesn’t like to make purchases at night. Apparently, once while shopping at night, Sheldon had the misfortune of having to deal directly with a stock clerk. However, Sheldon is willing to make the purchase since he really doesn’t want to be scooped by the Swedish team. The fact that Sheldon, who is always so intent on following the rules, is willing to buy black market liquid helium seems out of character for him. When Sheldon does raise the point that it is unethical (not mentioning its illegality), Leonard helps him rationalize the purpose, since they are spending grant money on the experiment, not using it for their personal gain. Leonard further drive home the point by inventing a quote by Einstein to support doing what needs to be done. 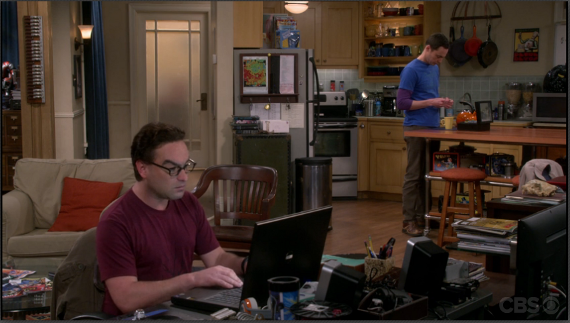 Amy, meanwhile, isn’t entirely sure she wants to try to dating app Stuart is putting on her phone. Rather than letting Amy try out the app, Penny takes it and starts rejecting potential dates for Amy, although one, who is possibly a murderer, did strike her as cute. Howard and Raj enter because Howard’s allowance wasn’t enough to let them stay out longer. They join in the fun of looking through the app. Raj takes the phone and continues to reject guys, including an Indian guy because Raj figures the group only needs one Indian, suggesting that they should find a Latino guy for Amy to round out the group. 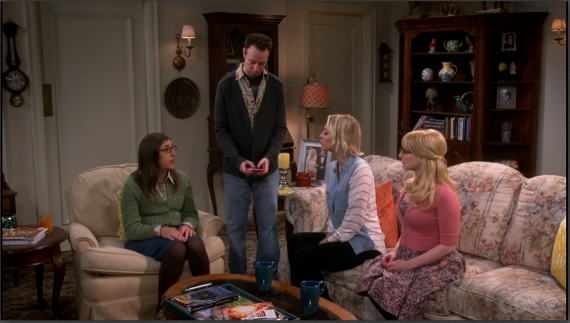 Leonard pulls a rental truck into a parking garage to meet with Howard’s supplier, who is waiting outside a white panel van. Approaching the van, Sheldon claims to be a wedding planner named Skippy Cavanagh, which is ironic, not for the reason Sheldon states, but because Sheldon has frequently stated that he is a horrible liar (he is, partly because he rattles off too much information), and that he doesn’t like to lie. 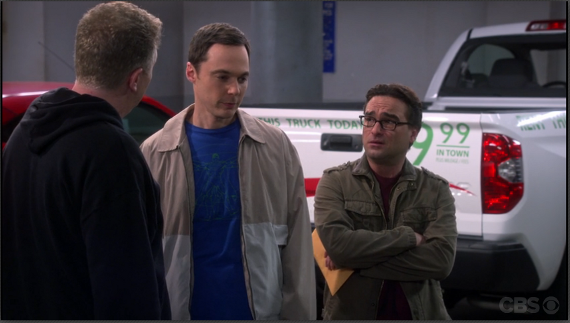 He also is concerned that the guy will take their money and leave without giving them the liquid helium. The big question is, can liquid helium be transported in the type of van shown, and can it be easily moved by Sheldon, Leonard, and the supplier given how heavy even a tank of normal helium is. In any event, Sheldon insists on getting the helium before giving up the money and the guy insists on getting the money before giving up the helium. His statement that they are at a stalemate leads to discuss about the difference between a stalemate, impasse, or a Mexican standoff. In explaining the difference, Sheldon reveals that he knows the guy’s name and employer, a revelation that the guy takes (not unreasonably) as a threat, although the guy also knows where Sheldon works and can report him. Leonard manages to rescue the situation by explaining what is happening and why it is so important to them to get the liquid helium. 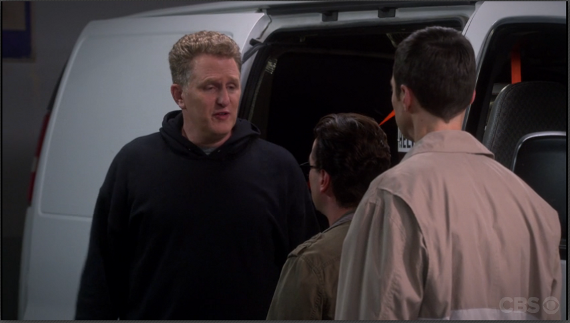 Back at the Wolowitzes’, Howard had hooked the phone up to the television so they can all pass judgment on potential suitors for a very disinterested Amy. 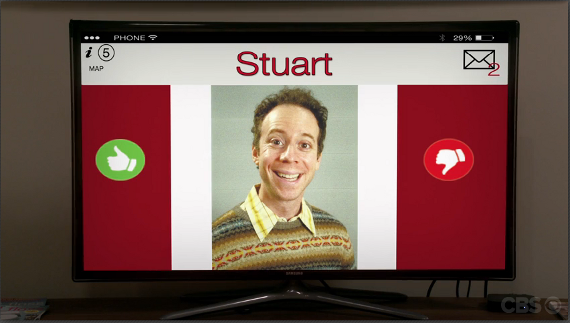 They are not only mocking the men on the site, but also poking fun od Amy’s situation. Amy points out that they are being mean and Raj agrees since they wouldn’t poke fun of people to their faces. When the next picture shows Stuart, Raj suggests he leave the room so they can mock him and not do it in front of his face. 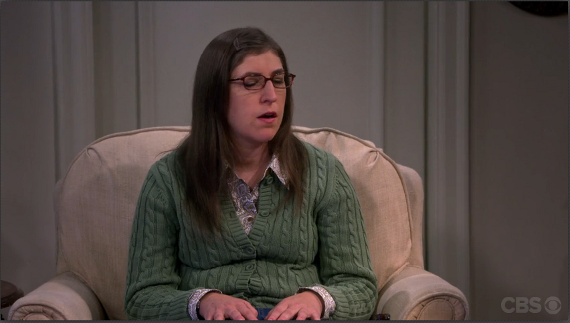 Sheldon pushes an helium tank disguised in a fedora and scarf into Leonard’s laboratory. Sheldon is beginning to have second thoughts about all the ways they can get caught. Seeing a sticker that states “Property of U,” Sheldon is concerned that the take was stolen from the US Government. Leonard suggestion that it was merely stolen from USC or UCLA seems out of character for him since it implies that theft of property from a rival university is no big deal. The two decide they should return the liquid helium to the guy. 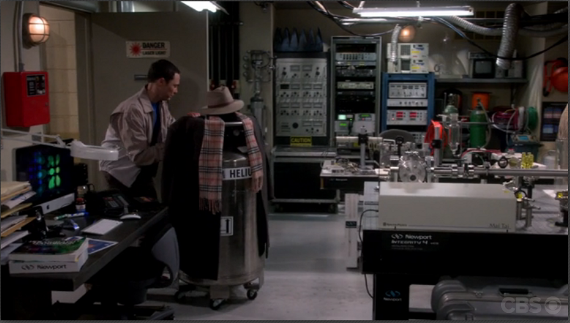 Penny is explaining the rules of the drinking game she’s created around the dating app. One sip for a shirtless guy, two sips for a guy with his pets, chug for both. When the next guy on the screen is posing with his pet and wearing only underwear, which matches underwear Raj owns, the whole group downs their bottles of beer. The game is interrupted when Amy receives a text from a guy named Dave. Although Amy grabs her phone from Penny, everyone can read the text on the television screen and it is revealed that Amy has been going on dates with guys who are not Sheldon. 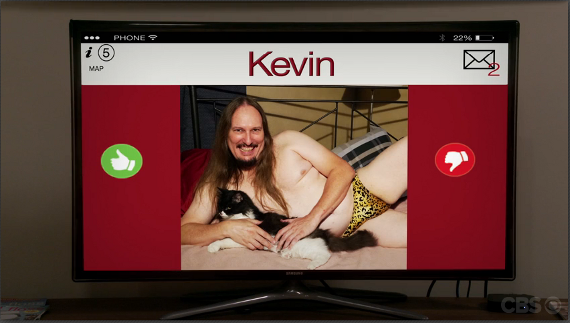 Back in the parking lot, the guy tells them he’s only come back out to avoid his daughter’s sleepover. He normally wouldn’t take the liquid helium back, but he will, although he’s also going to keep their money. When Leonard agrees, he informs the, that there is a restocking fee, which happens to match the amount that Sheldon has on him (although why Sheldon is carrying around a grand is a question left unanswered).

Amy explains that she didn’t share information about the guys she’s seeing because she’s trying to figure it out and it would get weird if she shared too soon. Stuart is dejected because while he’s gone out with two women using the app, Amy has managed to go on three dates.

Sheldon consoles himself with the fact that while the Swedes might beat them, at least he won’t go to prison and get gang-noogied. Kripke stops by to offer them helium on the grounds that they add his name to the paper since they can’t run the experiment without him. 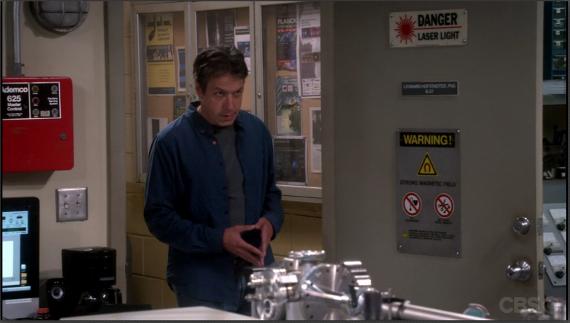 Rather than adding Kripke to the paper, they meet up again in the parking garage, hand over yet more money, and fade to commercial.

Back at the apartment, Leonard and Sheldon revisit the argument about a Mexican Standoff, and it turns out their helium guy has joined them for the continuation of the discussion, and to stay away from the sleepover party. They start watching Ernest Goes to Jail, the only jail movie Sheldon has seen. 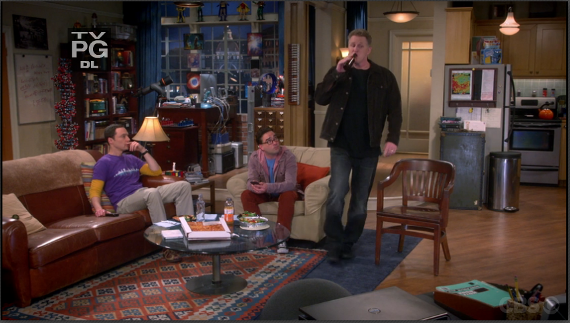