Before we get to the rest of the premieres, here are some late-breaking additional streams for shows reviewed last week: 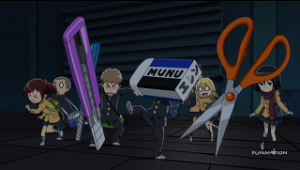 Attack on Titan: Junior High premiere – Eren Jaeger is all excited about his first day at junior high, so excited that he and his classmates accidentally wander onto the wrong side of campus where the giants go to school! After dodging a storm of oversized school supplies, they attend the first-day speech, where Eren reveals that the Titans once stole something precious from him… his lunch! Are you laughing yet? C’mon, laugh! There’s a whole season of this to go!

Just about every attempted gag requires you to be familiar with the original Attack on Titan series. For instance, Titans slowly lowering bento boxes into their mouths instead of people, or a recreation of the whole routine from Sasha’s first appearance, only this time she’s eating onigiri instead of a potato. If you haven’t seen the original series, you’re not going to get the jokes, and if you have, they’re a painfully unfunny reminder that all this time and effort could have been put into a new series of the actual adaptation.

If you’re that desperate for an Attack on Titan fix, just (re)watch the real thing. 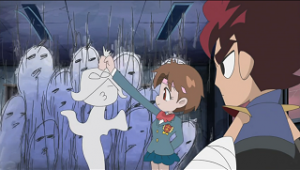 DD Fist of the North Star II + Fist of the North Star: Strawberry Flavor premiere – Once again our hero from a high-profile fighting story enters a new school, but this time his evil nemesis is the would-be head of the student council. This one comes off somewhat better than Attack on Titan: Junior High, mainly because it makes an effort to be funny to people who don’t get all the references, and it’s not getting in the way of more of the source material being made. It’s also willing to go with edgier humor and more distinctive animation.

A short segment at the end switches to retro ’80s art and has the villain from the original series welcoming to the show. I believe that’s the Strawberry Flavor part, and it’s not clear where they’re going with it. Not very far, if it’s going to be limited to a couple minutes at a time.

It’s still pitched to people familiar with its original, and it’s not exactly a laugh riot, but if you need to watch a school-based parody of a fighting manga, go with this rather than Attack on Titan. 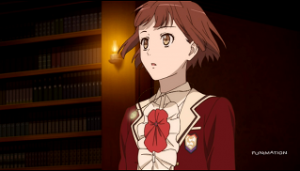 Dance With Devils premiere – Seemingly ordinary high-schooler Ritsuka Tachibana is having a seemingly ordinary morning. After saying goodbye to her mom and recharging her magic amulet, Ritsuka walks to school singing a happy song. No, an actual song with full lyrics and pop orchestration. See, the preview information circulating online left out the rather important detail that this is a musical.

This is not as bizarre a decision as it sounds. Anime-based musicals are big business. Even Death Note is currently casting a musical adaptation. So it makes sense that someone would eventually try to combine the two directly.

Unfortunately, on that score, the songs aren’t terribly memorable, either musically or textually. We get two in this episode, with the second being the introduction of the student council, which is composed of four demonic bishonen archetypes (the wholesome one, the creepy one, the romantic one, and the jock) singing about how they have their evil way with all the girls at school. But oh no, Ritsuka’s magic amulet stops them! Then her home gets ransacked, and her mom disappears, and various stock romantic plot points ensue.

There is no dancing, which seems like an odd omission given that the title is Dance With Devils, and the episode title specifically promises a Forbidden Quadrille. There aren’t even enough named characters yet for a quadrille, forbidden or otherwise. This is especially disappointing given that the next episode title includes the words “Secret Jitterbug”, and jitterbugging bishonen demons would totally be worth the price of admission.

Still, it’s got just enough oddness layered on top of its bog-standard reverse harem that it could be enjoyed if approached in the right frame of mind. Dance With Devils is living proof that just because a show is terrible doesn’t mean it can’t still be entertaining. 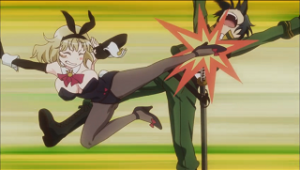 Anti-Magic Academy: The 35th Test Platoon premiere – Of all the light novel adaptations this season, this is the light-novel-est of them all. It checks all the required boxes: Boobs. Accidental boob faceplant. Accidental boob insult. Female character in a bunny outfit for no reason. Secretly super-competent male lead. And it absolutely excels with the ridiculous school uniforms, to the point where it looks like the girls are actually wearing theirs wrong.

The ostensible setup is that our main characters are junior inquisitors in a world where magic still works but technology has the upper hand. They go on raids and confront evil gangsters when the urge strikes them, because their military academy has no actual command structure and is totally cool with allowing cadets to run around loose and use deadly force whenever they want. Or because the writing sucks.

If your eyes lit up at the words “light novel”, I suppose there’s nothing I can do to talk you out of it. But everyone else, please, run while you can. 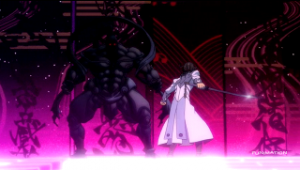 Garo: Crimson Moon premiere – Garo starts off fresh with a tale of demons and legendary figures of the Heian era. Abe no Seimei is a Merlin-like figure of the 10th century who has appeared in many anime series (your correspondent’s favorite is Otogi Zoshi). There was an actual historical man of that name, who was a well-regarded astrologer in his day, but his life story has been largely overwritten by legend.

In this version, Seimei is a woman. She works with a couple of other historically-based figures of that era, the swordsman Minamoto no Raikō, and his retainer, the famously strong (but maybe not in this version) Kintoki, aka Kintarō. Raikō has been reworked into Garo‘s signature hero, the Makai Knight, who fights demons with the help of elaborate magical armor.

This premiere doesn’t have the “Ha ha, look what we can get away with when it isn’t live action!” wildness of the first Garo anime, but that isn’t entirely a bad thing. It still has excellent production values and some beautiful art. This looks like it will settle down into a well-executed historical sword-and-sorcery drama. It deserves a second look. 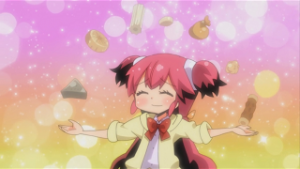 Magical Somera-chan premiere – Somera and her sister are two teens living without their parents, and Somera has magic powers, and random weird crap happens. I mean completely random, very weird stuff, with no payoff.

Okay, it’s three-and-a-half minutes long including credits, so it’s not like we can expect much. But it should be possible to spin at least a vague narrative thread linking things together, and Magical Somera-chan doesn’t bother. So don’t bother watching. 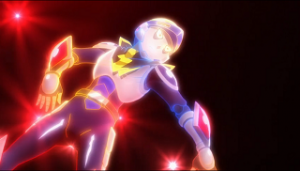 Brave Beats premiere – In a land where dance is king, an android named Breakin’ dares challenge the king of dance to a competition for his title. Breakin’ loses, and for his impertinence, he is flayed alive. Wait, no, wrong mythos. For his impertinence, he is exiled to Earth, and the Dance Stones he has carefully collected are scattered around the planet to possess the unwary. Which makes it seem like Earth is really taking the brunt of the punishment, but without that setup there’s going to be no story.

Breakin’ soon crosses paths with a kid named Hibiki who has no interest in dance, but before you know it, Hibiki’s best friend is possessed by a Dance Stone and is doing inhumanly fast moonwalks, so Hibiki and Breakin’ must merge and dance to save him! Now they will undoubtedly go through this routine over and over again until Hibiki has mastered every form of hip-hop step and idol move. He’s also been set up for one of those awkward superhero romance plots where his main female friend sees him as a friend but is in love with his hero identity.

This will undoubtedly sell a healthy number of toys. And it might turn a few kids on to music and dance, which would not be a bad thing. But if you’re over the age of about 10, there is nothing for you here.

Well then, our list of candidates for further viewing is Utawarerumono, Garo: Crimson Moon, Concrete Revolutio, Gundam: Iron-Blooded Orphans, and Kagewani. Check back next time and we’ll see what makes the cut for the rest of the season!

An interview with one of Heinlein’s children, Sarah Hoyt, author of Darkship Thieves