UPDATE: (Five minutes post publication): Emails from the attorneys have been received. Very good possibility that negotiations will be finalized this coming Monday. 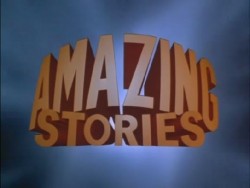 I can’t think of anything that will wake someone up faster than finding out that the entertainment press is going nuts over an announcement involving your property.

I had the pleasure of such an awakening this morning, via an email from one of the folks who have been diligently working on Amazing Stories for the past three plus years.

That email led me to The Verge, where it was announced that Amazing Stories would be returning to television via NBC/Universal as an anthology show.

The show originally aired in 1985 as a Steven Spielberg property (on NBC) and folks may well recall that the name was licensed, at that time, from TSR (Gary Gygax, Dungeons & Dragons, then publishers of Amazing Stories).

I have been involved in negotiations with NBC/Universal since, I believe, June of this year to provide them with the same kind of license for use of the name with this new incarnation of the Amazing Stories television show.

This leak offers details that are not completely in line with the behind the scenes negotiations, but I’m not going to dish since I was requested to keep mum until official announcements were made. The current press coverage does not look “official” to me.

Obviously I had plans for the licensing fees (should the show actually be green lit) that I would have shared with the folks who have been helping to bring Amazing Stories back as a regular fiction publication; that includes not only our regular contributors (those on hiatus too), but also the folks who submitted to our GWC writing contest and others in the SF field who may or may not be aware of our plans at this point in time.  In short, those fees would be the underpinning revenue for bringing the magazine back as a professional fiction publication.

Equally obviously, I am now in the position of having been one-upped, wind stolen from sails, poultry-product on face & etc., at least in regards to people who should have been informed well before the fact. My sincere apologies t those who deserved to know before hand. My hope was that all of us, including NBC/Universal, would be making a joint, huge announcement that would have put the current leak to shame.

The fact that I am still in negotiations greatly curtails my ability to provide any more information on the subject, though I can say that I brought in one of the best entertainment attorney’s in the business to work with my business attorney and myself (thank you illustrious SF author who provided the contact!) and I can also say that we’d settled on the financial terms and most of the other related stuff; only very minor detail remains. We have a good deal.

But I can’t talk about it.

So stay tuned as they used to say in television land.  Believe me, I’ll be digging into this – and I may make the decision that the current announcements DO constitute official announcement, in which case I’ll be having a lot more to say.

In the meantime, please visit the websites carrying the story (including our competitors who should never have scooped us – ’nuff said), since the more attention paid to the name AMAZING STORIES, the better it is for everyone!

…and pretty much all over the web.