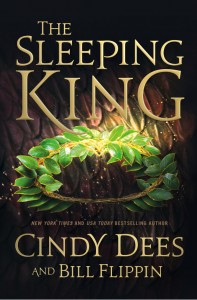 Based on an interactive role playing game called Dragon Crest, The Sleeping King by Cindy Dees and Bill Flippin is a telling (or retelling) of the ongoing story still being played out today. The conception and evolution of this book is different from your typical sword and sorcery adventure. Many if not all of the characters in this hero’s journey were originally created by their real world counterpart/individual who play them in the game.

One might think that this method would bring more lifelike elements to their characters than traditional fictional works as each player absorbs and massages the role alongside their alter egos. But putting these unique elements to paper is not always a smooth process. It is clear from the start that the favorable audience will consist of a select group of fandom.

For the story itself, legend has it that a powerful elemental exists. Known as the Sleeping King, this character could have the ability to bring order back to the collapsed utopia of Urth. In the chaotic world ruled by “near immortals” called Kothites, finding this fabled elven king is vital to the future success of both good and evil. The race is on.

For such a complex story of unique characters, the tension builds quickly and continues to grow and move along at comfortable pace from the first page. Thanks to the occasional detailed backstory the authors seem dedicated to providing throughout the journey, readers should be able to feel “in the loop” all along the way.

In world building, the proper use of prose can be more important than the setting itself. Though it is understandable to present various dialects when dealing with such a wide variety of characters coming from diverse backgrounds, this practice can become quite confusing and distracting if not done smoothly. Some of the characters in The Sleeping King are a little stiff in their dialog and seems forced, occasionally bouncing between fantasy world lingo and more modern world lingo, but luckily the plot flows well enough that it is not much of a disruption.

However, if you’re looking for one notable disturbance in the force, one could point to the dialect of a character who seems to be a mix between Yoda and Jar Jar Binks. Admittedly, if not for the success of the Star Wars franchise, this might not have been a problem at all. But unfortunately, since many fans have already been inundated with these overdone dialects (unless you live under a rock), Lizardman girl’s (yes, that is the name) phonetically challenged speech might be too much of a distraction for some readers.

The Sleeping King by Cindy Dees (bestselling author) and Bill Flippin (creator of Dragon Quest) is the first book in a new fantasy series released last week from Tor Books publication, but the real journey doesn’t stop there. The authors invite readers to visit the Dragon Quest website and even join them and their merry band of role players. Fans of LARPing will look at this book as an endorsement of their passion for fantasy. Those who like a complex story with a long list of multifaceted characters, this is not a bad place to start either.

It’s Christmas in July – in January!

Every now and then, I uncover a 24-carat nugget that stands out from all the other gems. And “The Poppy War” by R. F. Kuang is one of them.