Fate waits for all readers of F&SF! 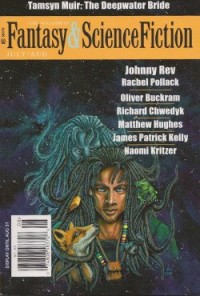 According to merriam-webster.com, the definition of fate is as follows:

1) a power that is believed to control what happens in the future, and 2) the things that will happen to a person or thing : the future that someone or something will have.

The July/August 2015 issue of The Magazine of Fantasy and Science Fiction uses the theme of fate and explores it from just about every angle. Can one escape fate? Is it right to do so? Can the powers of magic and technology be enough to escape a gruesome fate, or is fate set in stone? The answers to these question can be found throughout the ten pieces of short fiction that Gordon Van Gelder and his staff have selected.

Headlining this month’s issue is the title story, “The Deepwater Bride” by Tamsyn Muir. It is a dark fantasy tale that is set in a small town plagued by nightmarish phenomenon, both real and supernatural, that the government is either too stupid or ignorant to notice. The protagonist is a teenage girl, Hester, who claims to be the latest in a line of long-lived observers whose task is to watch the world burn and get rebuilt and record it all for future generations. When an abyssal demon lord enters the world in search of a human woman to make his bride, Hester goes against her duty to find her first, only to be confronted with the idea that sometimes fate is inevitable, and that the only choice one has sometimes is to accept it, which she refuses to believe.

Another tale about accepting one’s fate is Nebula-winner Richard Chwedyk’s short story “Dixon’s Road.” This is the first true science fiction story of the issue, though apart from a few mentions of terraforming and cryogenics this story could easily have taken place in the modern day. The setting is the home of a dead poet on a distant planet, long since turned into a museum for small groups of tourists and scholars. The former lover of the deceased author, recently awakened from cryo-freeze after working on a far-off planet project, returns to the house for a quick look. While the man, Dixon, seems to have known for quite some time what this future would look like, going so far as to say “it’s part of your history now,” as a reader it feels like a tragedy, and that even though he had accepted that his future would be without everything he had ever known it did not change the fact that it was not part of his life anymore.

The next story, James Patrick Kelly’s “Oneness: A Triptyck” is essentially two brief vignettes about alien sex followed by a slightly larger piece about a devout Christian missionary attempting to convert a sect of intelligent, skeptical aliens to Christianity. The missionary, Beckah, is a die-hard believer in God and the Bible, and convinced that no matter what happens her fate was God’s will, not her own. She accepts her mission without fear, almost as if she were a machine. Kheran, the alien who is debating with her about her views, seems open to the idea that people can change their fates. While only a few pages long and not enough to really get too in-depth with the philosophical, the story hammers out the timeless question as to whether or not we as human beings are the ones who set our own path, or if it is redetermined for us by higher forces.

One of my favorite pieces in the issue was Rachel Pollack’ novella “Johnny Rev,” a mixture of science fiction and fantasy. It is this long story that brings to mind the question of whether or not magic can in anyway prevent the inevitable, or if there are limits to what even it can do. The idea of escaping or attempting to escape one’s fate is prevalent throughout the entire story. We are told that in this universe certain people can create “dupes”–duplicate of themselves that can take their place in dangerous operations or situations, and it is one of these (Johnny Rev, the title character) that causes trouble for Jack Slade, the protagonist. Johnny is out to kill Jack and replace him in the world, but is trapped in a dream world that he must escape. While Jack struggles to contain the dupe that he had long thought destroyed, he discovers forces at work that seem to be sealing his fate, and goes to great lengths to prevent Johnny Rev from winning. Unlike the stories that came before this, “Johnny Rev” acts on the notion that one should not always accept his or her fate at face value, and that the future is not set in stone.

“The Body Pirate” follows “Johnny Rev.” Written in an unusual style by Van Aaron Hughes, it tells of a small group of people who have the ability to inhabit and control different bodies, including birds. One member of this group, Prelan, has grown disillusioned at the idea of occupying the various bodies and sets about to destroy everything the group has worked for, thus trying to tie their fates into his own. The story begins in standard paragraph form, but after a few pages reverts to two columns telling a different part of the story. Column A is on the left and B (named as such simply for the context of this review) is on the right of each page. In order to finish reading the story one would have to take it one column at a time, reading down the left of one page and then moving on to the left side of the next page, and so on until the story begins to become long, solid paragraphs again. At this point, the reader has to flip back several pages to where the columns began in order to start Column B, which this review found pointless and frustrating.

Returning to the realm of fantasy after several great SF stories, Betsy James’ “Paradise and Trout” seems to go beyond fate, and tells about what happens to a young tribal boy after death. James does a great job capturing the main character’s youthful nature. He knows he is dead but still, as any child, wants to go home, and sadly has to deal with the fact that he is dead and that his family is performing rites that will forever prevent him from returning home. He has no choice, then, but to follow his father’s final instructions and seek out the spirits of his uncles in the afterlife. The tale is about a true journey towards accepting one’s fate, as opposed to the characters we have seen so far who either refuse or have been born into accepting whatever happens to them. For the majority of us, we have to learn to accept such things, and this story does a great job reminding us of that.

Matthew Hughes’ fantasy “The Curse of the Myrmelon” appealed to the Sherlock Holmes enthusiast inside me. While listed as a discriminator instead of consulting detective, the protagonist Cascor finds himself being visited at home by an important client and asked to take up a case, which Cascor accepts. To aid in his endeavor, the discriminator hires the aid of the thief Raffalon (who the author introduction mentions has appeared in other stores by Hughes) thus suggesting the influence of others in our fates. Raffalon not only exists to aid in the successful completion of the mission, but also appears on his own accord towards the end of the book to rescue Cascor from a violent demise. Mentions of a previous fateful encounter between the two men also suggests the notion that sometimes two people’s fates are dependent on the other, and in this particular case they both find success.

“The Silicon Curtain: A Seastead Story” is the latest of Naomi Kritzer’s Seastead series. In this story fate is simplified to a single choice that the main character makes–one that will affect the lives of over 800 people. As we have seen in the previous stories, some people accept their fate while others do not. This story moves along at such a brisk pace that the affected people do not even have time to react when a decision is made that will drastically change not only their lives but the lives of all the denizens of the floating cities that comprise the Seastead series. While it seems to hold its own as a standalone story, I personally feel like I would have benefited from reading the others. There are several references to events that are not expanded on that affect the story, and that made me stop a few times to try to figure out what was going on. It is a well-written, fast-paced story, but with a few stoplights here that should not be there.

Finally, the issue ends with Gregor Hartmann’s “Into the Fiery Planet.” Finally, after many trips to the near-future and various fantasy worlds we come to the epicenter of science fiction–outer space and alien worlds. In this story, a brewing war threatens the livelihood of an entire planet-wide paxoforming project, and the main character, a sergeant in the planet Zephyr’s Preservation Authority, is tasked by a high-ranking official to help come up with propaganda that will prevent the planet from having its resources cut by the warring planet that rules over it. Fitting for the last story in the issue, this story revolves around the fate of not only the individual person, but an entire planet and an entire way of life. Easily a story that could start a series, I personally hope to see more of his stories in the future.