Self/Less: The film that stopped trying. 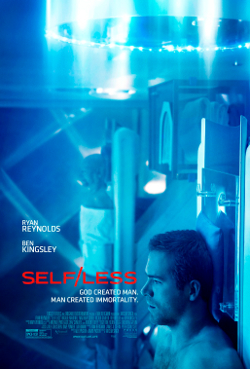 Starting from the completely acceptable idea that only the greatly self-motivated can accumulate a huge amount of possessions – that greed begets greed and the thing we are most greedy for is more time – SELF/LESS hides the more radical notion that the rich are just as capable of moral behavior as anyone else if given the proper motivation. They’re also capable of playing a mean game of basketball and plowing through hordes of trained killers if given the right set of reflexes, but that’s getting ahead of ourselves.

To start with, SELF/LESS is about the final days of real estate magnate Damian Hale (Kingsley) who, though he has gotten a lot out of life is not quite ready to give it up and jumps at the proposed miracle cure for his fatal cancer when a mysterious professor (Goode) shows up at his door. The cure being not so much a cure as a new life as Professor Albright proposes to transfer Damian’s consciousness into a new, purpose built body (Reynolds) so that they may continue living indefinitely, a super perk for the super-rich.

It’s an decently conceived and executed concept through which director Tarsem Singh (THE CELL) could (and to a degree does) investigate themes of self and how malleable our innate personalities are, but which quickly and frustratingly becomes bait for a much less interesting action film to swallow.

But SELF/LESS takes some time to get there, focusing instead on the world old Hale leaves behind – particularly the contentious relationship with his much more charitable daughter (Dockery)—and the acclimation of his new one, building a real sense of both who Hale was and who he could have been. Through the central concept of changing bodies Hale becomes a cypher for the struggle with identity and the notion of giving up the self (or at least the flotsam which has accumulated around it over a lifetime) in order to find the truest version of it, like a Hallmark card about letting something go to see if it will come back, just with more gunplay.

While the philosophical ramifications are barely touched on (and mercifully so), Singh uses the notion of it to create a sustained sense of existential vertigo which goes in hand in glove with the slow suspense of the first half as Hale discovers what he’s actually bought. As decades of Twilight Zone-esque storytelling has taught us no such perks come without a lot of strings attached and the ones Damian must hold unto – including faking his own death, not telling anyone who he really is and a warning against potentially very vivid hallucinations – should add up to a giant red flag.

A giant red flag Damian realizes he should have heeded when the hallucinations turn out to actually be the memories of the very alive body of a man with a wife and family and history which he has taken over in order to keep, as Albright puts it, the worthy alive a little while longer. It’s the idea of the rich preying on the vulnerable taken to its most ostentatious and obvious edge just short of having the victims baked and served up with apples in their mouths, a notion so horrific that even those taking advantage of it are as nauseated as a normal person might be when they learn the true cost.

Hale’s discovery not just of what has happened but that he is being followed by goons ordered to prevent that knowledge from coming out at all cost is both the high point of the film and the beginning of the end. From there on, like so many high concept action films before it, theme and mood are cast aside to make room for crashing cars and stuntmen on fire as SELF/LESS apes Hale’s transformation from contemplative thought piece to action movie.

It’s a loss Singh seems completely aware of as his trade mark visual panache goes out the window for a flat, realist look more at home in a Cary Fukunaga film than in a flaming sci-fi lab; while it is perfectly apropos to the first half XX’s lens work delivers flat, uninspired set pieces.

The loss of tone and quiet build is keenly felt in the weaker second half as the film gives up on suspense and embraces an obsession with twists and turns which should make the narrative thrilling but instead just make it unbelievable and frequently self-contradicting. Once the desperate search for the truth ends SELF/LESS turns into a chase film, a desperate search for escape, except that it doesn’t. Instead it periodically stops so that Hale can explain to his body’s wife what’s going on (fair enough), teach Matt’s daughter how to swim (dealing with unresolved daddy issues with his own daughter) and make out with said wife (what??).

The breaks for character development involve neither of those words but have the added benefit of slowing the narrative to a crawl without adding the personal stakes the filmmakers are going for, primarily due to the weakness of Madeline’s character and Martinez’s performance. Reynolds himself does nothing new, but he evokes terrified assurance (a difficult contradiction to muster) and keeps action scenes grounded.

On the other hand he in no way resembles the reserved, commanding presence of Kingsley’s elderly Hale. If they didn’t both call themselves Damian Hale you would never confuse them for being the same people (regardless of Kinglsey’s forced Brooklyn accent).

SELF/LESS resembles nothing so much as a film that stopped trying, or at least a filmmaker, as the good will left over from the solid first half propels the film over the finish line, but only barely. Ultimately it becomes an exercise not in the bravery to actively try something new but in the fear of accidentally doing so. For a film theoretically about the questioning of identity SELF/LESS never tries to be other than it is, embracing its faults rather than surmounting them.

Tanya reviews our past month and finds it interesting.