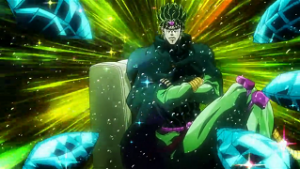 JoJo’s Bizarre Adventure: Stardust Crusaders #45 – Yes, folks, welcome to Dio’s world, where he sashays confidently down the street and mutilates his enemies while looking fabulous. I must remind you all once again that the manga this is based on ran in the manly-man magazine Shonen Jump. Therefore, even if Dio’s outfit is accented with hearts or he invites his enemies to lose their anxieties by worshipping him, this must all be interpreted in a totally straight way, no matter how camp it may get.

But regardless of orientation, Dio’s Stand has an ability well-suited to a final boss. It appears to be able to warp space or teleport people in some way. In addition, he’s far and away the best outright fighter they’ve had to face.

At least no one got killed this week, but it looks like Kakyōin is going to step up to the plate next week and perform a heroic sacrifice for a little more information. At four more episodes left, there’s plenty more room for twists and turns and nasty surprises about how Dio’s powers really operate. 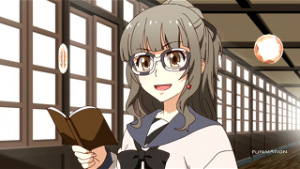 After all the randomness lately, it feels a little weird to have some straightforward advancement. Eruna now has a temporary charter for her club, a quorum even though one of them is technically not a student by a flying Siamese cat in disguise, and a meeting room, despite a suspiciously coincidental challenge from the journalism club. In any other show, I’d assume that had to be a setup, though I don’t know what the journalism club gets from it. In this one, it might be just another random whim on the part of the writer.

Meanwhile, the end credits have another new song and graphics, because hey, why not? Honestly, at this point, I don’t know if the people responsible for this show are demented geniuses, or just demented. 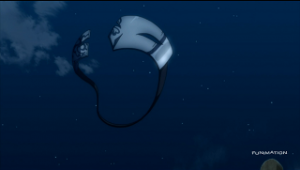 The Heroic Legend of Arslan #9 – I get that this is an adaptation of a novel and things will necessarily move more slowly than in your typical TV-original series. But The Eccentric Family was adapted from a novel too, and at episode 9 it was more than halfway done.

Or, to compare it to the last fantasy epic we followed, by episode 9 of Yona of the Dawn, Yona had shaken off her timidity and taken charge, the heroes had learned of the massive quest they needed to undertake, and they were already in the process of undertaking it. Here? Arslan is still largely confined to his cave while Narsus and Daryun are still trying to figure out what to do.

What actually happened in this episode? Hermes got his mask knocked off and revealed nothing that wasn’t obvious a while ago. Innocentis is still mooning over Tahamenay. Gieve is still mooning over Farangis. The only real development is the highly contrived encounter between Arslan and Étoile, and that’s over in a couple minutes. Next week it looks like everyone sits around and eats. My expectations from this series are rapidly dropping from looking for a bold fantasy adventure to just hoping it gets moving again before the end of the season.

Revisiting the Short Story and Heinlein’s Five Rules of Writing

It’s no secret that Clarke has tried his hand at wit before, but Trouble with the Natives hits every mark like a veteran comedian, making this short story an instant classic.

New Theory Regarding the Fate of the Protoplanet Theia