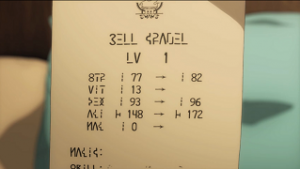 Is It Wrong to Try to Pick Up Girls in a Dungeon? premiere – The city of Orario is a stock computer RPG setting. For no reason worth mentioning, it contains a multi-level labyrinth full of mindless monsters that power the local economy by turning into magical gems when killed. Adventurers who fight the monsters also gain skills and abilities with the help of their patrons, who are deities of a sort in very limited human forms. The tropes of the CRPG are in play so thoroughly that this process even involves character sheets.

Bell Cranel is a new adventurer looking to make his fortune, currently scraping together an existence as the only person in his party. This being a harem comedy, he comes to the attention of several young ladies dressed in outfits designed by someone with only a passing acquaintance with female anatomy or Newtonian physics. They include:

As harem comedies go, it’s not cringingly bad– there’s only been one awkward boob encounter, the girls haven’t had a chance to start beating Bell up in jealous rages over ridiculous misunderstandings, etc.– but it’s not setting out to be terribly ambitious, either. One good point: terrific music. 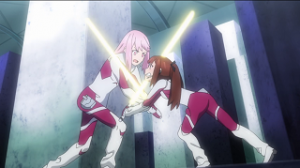 You know something different is up when it starts with a quote from St. Augustine. Then we meet Tōru Kazasumi, a high school student somewhere in the future, who just wants to keep his head down and conform as much as possible. He’s been dreaming of a mysterious little girl scrawling advanced mathematical equations on the ground. One afternoon, walking home from school with his best friend Kyōka, he sees the girl, and written across her latest work is a plea for help.

Chasing the girl, Tōru and Kyōka suddenly find themselves falling out of the sky in the present-day Shibuya, where a bunch of fighters are having it out with advanced armor and weapons. Luckily they come to this prepared to take care of themselves, because for reasons not yet explained, P.E. at their high school consists of advanced combat training with paintball guns and lightsabers. (Best. High school. Ever.) And then, confronting one of the fighters, Tōru finds himself facing his exact double.

SFnal anime fans may at this point be thinking of a show from a few years ago, Noein: to your other self, which featured forces from two alternate futures fighting in the present. It’s a suspicious coincidence that “Your Other Self” was part of the episode title. The writing pedigree for this show is good enough that if it is deliberately borrowing from Noein, it’s doing so to try a different spin on the material. It’s holding together very well so far, with a good balance of action and exposition, and deserves to be stayed with for at least another week. 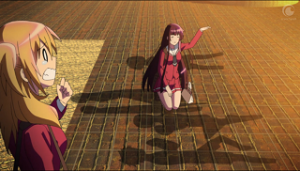 Re-Kan! premiere – This supernatural comedy starts off with heroine Hibiki Amani praying at the household shrine to her dead mother. That’s not quite the downer it sounds like, because Hibiki has the reikan, or ghost sense, which makes her sensitive to the supernatural and entirely comfortable around the dead. She plays with dead children in a local park and converses politely with the lingering aura of a serial killer.

After a week at a new school, everyone is accustomed to Hibiki and her spooky unseen companions, except for class representative Nanami Inoue, who doesn’t believe in ghosts. Nanami also happens to be the one other person who can sometimes see the ghosts when Hibiki is around, leading to all manner of hijinks.

For the most part, Re-Kan! strikes an aggressively nice tone. Hibiki is kind and respectful to all of the dead and earnestly insists that the living must maintain a connection with them. Even Nanami has lightened up and started playing tag with the dead kids by the end of the episode.

Being based on a comic strip (not a manga as previously reported) gives it a scattered feel, and it doesn’t seem like a good candidate for blogging along with. But I’d recommend it to someone who’d like a low-key, affirming show. 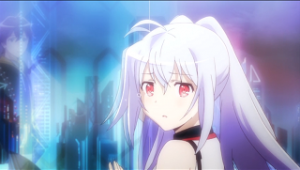 Plastic Memories premiere – Now here’s an unconventional start to an anime show: a young man puts on a suit and tie and reports for his first day at work at a traditionally organized corporation. Tsukasa, the guy in question, has landed a job in the retrieval division of an android manufacturer without any idea of what they do there.

The company makes Giftias, artificial humans with a very precise lifespan. After about nine years, their memories (allegedly) become corrupted and they must be collected and shut down. The owners, who mostly appear to treat the Giftias as substitute children, sometimes refuse to allow the Giftias to be collected, meaning the retrievers sometimes have to use force or subterfuge.

Tsukasa is paired with a Giftia named Isla, who is allegedly an expert but turns out to be a standard timid, clumsy moe girl. Isla is hinted to be approaching the end of her service life, meaning there will be much melodrama as the event approaches and Tsukasa works through his feelings for her. There will probably also be commentary about the culture of disposable items. Meh. 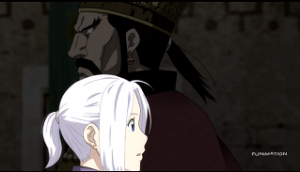 The Heroic Legend of Arslan premiere – When Prince Arslan of Pars is 11 years old, his father returns from a battle with the nearby kingdom of Lusitania with a string of captives, one of whom is a boy Arslan’s age. Being an inquisitive guy, Arslan decides it would be fun to talk to the Lusitanians about their poorer but still exotic homeland, only to wind up as the hostage of the Lusitanian boy.

During their brief acquaintance, Arslan does learn a little about the Lusitanians’ peculiar monotheistic religion. Their god is fine with child soldiers and total slaughter of heretics, but has a problem with slavery, which Arslan finds baffling as it is widely accepted in Pars.

So yeah, basically, medieval Europe vs. ancient Persia. In the brief time the boys can interact, the show does a good job of setting up each as having its good points and its faults. This is all a prologue to the real story, though, which begins when the Lusitanians return three years later. Because it’s a prologue, it’s hard to get an idea of how the rest of the show will go. What the heck, let’s give this another week. 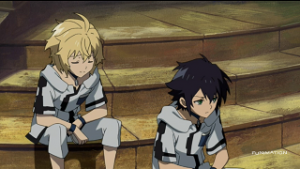 Seraph of the End: Vampire Reign premiere – One day, every adult in the world just sort of falls over in unison and the vampires sweep in to take over. Three years later, the kids are held captive in an underground city and serving as livestock for the vampires. Some get invited home with the vampires for special parties with pedophilic overtones. Even more creepily, everyone is required to report for regular blood donations. (Japan has long harbored strong cultural resistance to the idea of blood donation. Boy, is the International Red Cross going to love this show.)

One of the kids is Yūichirō, who lived in an orphanage before the apocalypse and still sticks with the other orphans as a family of sorts. If the cynic in you looks at the gaggle of adorable little kids and suspects that they will all be dead by the end of the episode to provide the hero with traumatic motivation, it is entirely correct. When Yūichirō stumbles out of the city as the only survivor of an escape attempt, it conveniently turns out that he is the chosen one whose arrival was prophecied and who will lead the fight against the vampires, etc, etc.

It all feels terribly forced and not terribly original. I recommend skipping it. 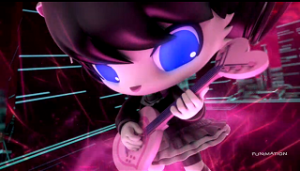 Show By Rock!! premiere – Cyan dreams of rock stardom, but can’t even summon the courage to apply to join the school rock music club. Trying to fortify herself one night, she picks up a special guitar in a game, and then suddenly finds herself turned into a catgirl, falling into the game world, and playing that selfsame guitar to fight off a gigantic beast made of bones and horns and speaker diaphragms. After a brilliant performance, she is recruited by an anthropomorphic egg who manages a rock band of other semi-anthropomorphic girls.

In this world, it seems, some musicians have magic powers which are centered on a magic stones. The stones can be taken away from them by creatures called Dark Monsters, and may also be involved in a process whereby the musicians can turn into Dark Monsters. Does that sound like…? Yes! It’s Madoka Magica with rock bands! Only making way less sense!

Also, someone is keeping Elvis prisoner until he writes the ultimate rock song.

The fighting scenes alternate between 3-D CGI (footage from the game this is based on?) and traditional flat animation, two styles which blend together not well at all. The 3-D avatars hover in the uncomfortable grey area between cute and creepy.

This is definitely the show to watch this season if you’re stoned, but from any other angle it’s a total mess.

So we’ve got a couple candidates for a second look, and we’ll pick those up again in a couple weeks after checking out the rest of the premieres. And I haven’t forgotten JoJo either, it’ll be back then too.

If you see something that looks interesting and isn’t available in your area, don’t worry, the simulcast announcements are coming thick and fast right now. If any of the shows this week are picked up by more streaming sites, I’ll give you pointers to the streams next week.