Cinderella (2015) doesn’t quite get out from under the shadow of its namesake – but it sure tries hard! 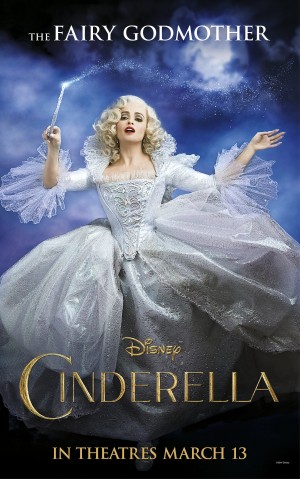 The problem with beloved things is they are put up on pedestals to be admired and become in the process very, very familiar – which makes seeing them clearly in context with the world around them difficult. It’s a problem beloved Ella (James) is ignorant of but will soon face as her father’s (Chaplin) desire to encourage her childhood optimism and fairy tale life collides with the harsh realities of life including her mother’s death and his need to travel for long periods to earn a living.
It is, however, a problem director Kenneth Branagh (“Thor”) is all too aware of as he tackles the very tricky business of creating a homage to something familiar without creating a rank copy. Based as much on the classic animated Disney film as on the Charles Perrault telling, the newest “Cinderella” isn’t new at all as it trades on its own status as an icon as much as own the strength of story; it’s like the motion picture version of meeting an actor playing Cinderella at Disneyland. Branagh tries hard to get out from under that shadow of familiarity. 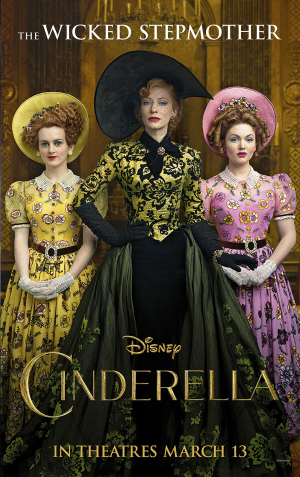 He doesn’t quite manage it – the deck is too stacked against him – but he fares better than most.

The choice Branagh faces is getting us to like the film either for itself or for what it reminds us of (one almost always overrides the other) and he spends most of “Cinderella’s” running time balancing on a knife edge between the two, trying to satisfy both urges simultaneously. Like most fairy tales it’s a situation that’s not going to end quite how he or we might want it just as Ella’s naturalistic life with father ends with the arrival of his materialistic new wife (and her daughters). Before he can syncretize the two clans into some form of a whole he dies, leaving Ella in the care of her stepmother (Blanchett).

Even for those not familiar with the animated version, the story itself is well-known – appearing as it has in numerous children’s tales including those by Perrault and Brothers Grim – leaving Branagh and screenwriter Chris Weitz (“The Golden Compass”) the choice of creating some meld of, or homage to, the 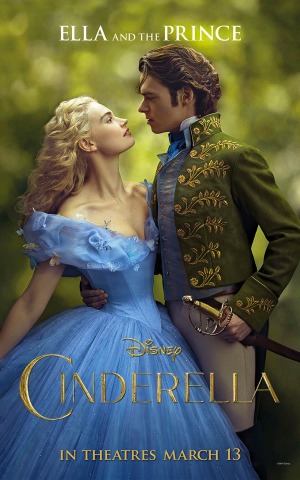 different versions, or swinging off on their own to find some new facet to the tale.

Because this is a big studio production familiarity has a premium of modernity and the filmmakers lean heavily towards the former. And though they never quite fall over, true surprise is at a minimum as a result.

Where they do find it tends to be at the margins as the filmmakers approach the characters at least as humans first and icons second, building relatable and believable rationales behind their relationships and actions. Rather than just allowing the stepmother to be wicked because it’s in her name, they make sure to fill in how the anger over being overshadowed by Ella’s dead mother and fear for her daughter’s future leads to reduce Ella to little more than a cinder covered servant in her own home. In much the same way Stellan Skarsgård’s Grand Duke is more than willing to sell the young prince (Madden) into marriage against his will if it means safe-guarding the nation and its people.

The only downside to these various machinations is that they each eat screen time from the other, never giving either quite the focus a true villain needs. Blanchett in particular loses out as even in her own home as she is overshadowed by the antics of her vain daughters, though silliness (particularly from CGI animals) is kept to a story required minimum.

Still, if the dilution of the villains is the price to be paid for creating a more balanced background for the prince and building a real connection between him and Ella even before the ball is announced, it is worth it, creating a world of nuance and believability underneath all the magic pumpkins.

It ultimately adds up to some real emotional stakes for Ella – something easily lost in a world of fairy godmothers and wicked stepmothers where the heroine is usually a foil for someone else’s agenda – as she attempts to hold on to her optimistic spirit in the face of an indifferent world. But those little things, as nourishing as they are, are also about as much room as Branagh is allowed to deviate from the script. His remit is to tell a very familiar story with certain fixed points which must occur.

Faced with those inevitable moments he has decided to present them as sumptuously as possible, working with production designer and Martin Scorsese secret weapon Dante Ferretti to craft a fairy tale continental Europe for all time. The film frame shimmers in gold and blue and the prince’s ball, the pinnacle of “Cinderella’s” magic in every respect, gives Sandy Powell (another Scorsese alumnus) a chance to fill it with a dazzling assortment of ball gowns, military outfits and over the top accoutrements, glass slippers included. It really is a feast for the eyes. 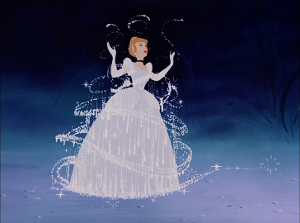 It’s just a pity it can’t do more. As retelling’s go “Cinderella” has had a lot of thought and a lot of heart poured into it, which is more than most of its brethren get, but the very familiarity it trades on to peak the audience’s interest ultimately keeps it from reaching its full potential.

The inevitable side effect of its heritage means that ultimately every character and situation can only go in one direction. The more familiar you are with the source material, the more boredom you may have to contend with as the film inevitably begins marking off required sign posts.

Sometimes art and enjoyment is more singer than song, more about how the story is told than the story itself, and Branagh goes about his business with wit and panache. But he’s fighting with one hand tied behind his back.

What other trilogy has brought back the original actors, playing the same parts, 40 years on?

Redwood Forest – a Radical New Design for a Martian City