In this week’s viewing: Yona meets a test with courage, Yatterman Night meets one with crazy, and more! And a link to NSFW imagery….

It may be mid-season, but there’s been one more big streaming announcement: the long-running shōnen title Naruto Shippūden is expanding its reach to much of Europe on Viewster (see the bottom of that post for countries and languages) and Australia and New Zealand on AnimeLab. 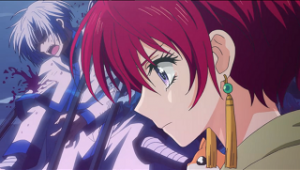 Yona of the Dawn #19 – Yona has one simple job: fetch the vital herb that Gigan’s crew needs, which only grows in one place accessible by a crazy-dangerous path, buffeted by unpredictable winds and waves. And you wonder, hasn’t anyone worked out how to cultivate this herb? If they haven’t, at least you’d think that someone would have gotten around to widening the path, if it were that important. I mean, leaving things so that one person being out of commission cuts off your supply is a bad move. I’d prefer to think that the senjuso actually grows in plenty of other places, and this is all just an excuse for hazing newbies.

Plot holes aside, the senjuso errand provides some terrific scenes for Yona as she confronts her weakness, admits it, and overcomes it. Every few episodes, she surpasses herself once again.

And afterward, with some prodding from Jeaha, Hak confronts his own feelings and is rather less successful. It’s obvious to at least one other person now how he really feels, but unfortunately for him it’s not Yona, who is completely oblivious. Or is she? She’s smart enough to have noticed and have decided to give him space to figure things out. 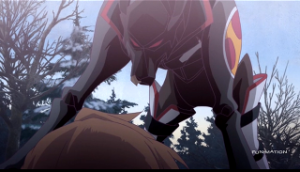 Yatterman Night #6 – We’re all clear now about the origin of the cyborg dog, right? The one that looks exactly like the picture of Alouette’s dog? The one that chased Galina down but just wagged its tail when it caught him? Obvious enough?

This has disturbing implications about Goro. Has he been truly turned by the fiendish tortures of the labor camps, or is he brainwashed, or does he just have no memory of the person he almost certainly must have been? I’ll bet on brainwashing plus amnesia.

So here’s the point where the grownups decide to be the grownups and admit that this whole thing is hopeless. Which lasts all of several minutes, because Leopard isn’t just an especially assertive 9-year-old, she’s an irresistible force of nature. She is the person who will run directly at an entire firing squad unarmed, with no plan, because it is the right thing to do, and trust it all to work out somehow. And it will. No, what is completely hopeless is attempting to convince her to change her mind, and everyone knows it now. That will surely be the last time that Voltkatze and Elephantus attempt to do anything but be good little henchmen.

By the way, for anyone still wondering, in the Japanese dialect of the language of flowers, lavender stands for faithfulness. 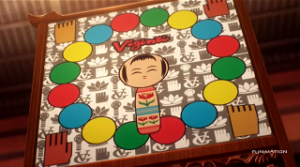 Death Parade #6 – This week, it’s back to the routine of high-stakes competition with a game that shall not be named, because the afterlife may have nothing to fear from Milton Bradley’s lawyers, but Madhouse certainly does. And concealed in that lovely artisanal spinner is a clue regarding both this week’s host and the entire organization of Quindecim.

Viginti is Latin for 20 and probably Ginti’s full and proper name. (Though, yes, that should be a soft g.) With Decim almost being Latin for 10 (it’s actually decem, and a soft c), that suggests everyone is named for their home floors. Nona would be 9, and Quindecim, 50 (if you abbreviate the Latin for “five” and then use Japanese number-building syntax, anyhow), which would probably be the total number of floors. If management is floors 9 and up, that leaves a maximum of 41 floors for judging people, and at the rate of 7000 deaths per day as stated last episode, means there would have to be approximately 85 games per judgement floor per day in order to keep up if everyone has to be funneled through this system. No wonder they feel understaffed.

Ginti himself so far exists to show that there are worse hosts than Decim, who may seem unfeeling toward the people he judges, but at least he doesn’t actively enjoy their suffering. 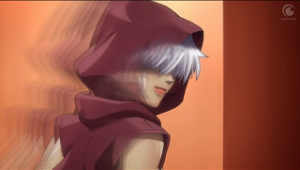 JoJo’s Bizarre Adventure: Stardust Crusaders #30 – As a rare villainess in the most macho TV show ever, Mariah represents all things girly and terrifying. From her suggestively shaped Stand to the tactic of ducking into the ladies’ room, she is the veritable personification of cooties.

Though girl power is doing pretty well so far in this fight, one must say, having nearly taken out Joseph and seriously cramped Avdol’s style. Looks this one will be up to Jōtarō and Iggy to sort out.

Speaking of toilets, the author seems determined to chronicle every Third World sanitation horror he encountered on his real-life trip, but at least he’s letting Polnareff off the hook for once. When you can plausibly have the other characters comment on how someone seems to have developed a trope, it’s definitely time to switch it up a bit. 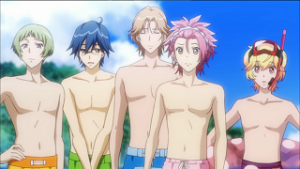 Cute High Earth Defense Club LOVE! #7 – Now it’s time for Cute High to parody… terrible high-school romance stories, maybe? The title is a nod to Love, Election, and Chocolate, a visual novel (sort of a computerized Choose Your Own Adventure story) with a high school harem romance setup that was adapted into an unremarkable anime series a few years ago.

While everyone else is being creeped out at the mere implication that they or anyone around them might be gay, it’s Mr. Tawarayama’s turn to take a few minutes in the spotlight. Turns out Wombat was mostly telling the truth, and he did eventually recover from being slightly dead, though heaven knows what taking the brunt of a full-on Love Attack has done to him.

This seems like as good a time as any to explain a bit of subtext about Mr. Tawarayama, but I warn you, this is something you will never be able to unsee, and you may just want to stop reading now.

Still there? Okay, so the family names of all the members of the Earth Defense Club are the names of towns famous for their baths. Tawarayama has baths too, but it’s also notable for a fertility shrine housing a spectacular sculpture collection dedicated to male anatomy (NSFW, needless to say). That repeated business where Mr. Tawarayama spends most of his time flopped over except when Wombat takes control of him? Um, yes, I think we are supposed to have that mental image you’ve got now.

Folks who read my author bio will have realized I lead an interesting life or that I have a passion for Starbucks. No wait, that wasn’t it. Yes, you will have noticed that I’m something of a hardcore gamer and that I’m visually impaired. Granted, the latter does make my chosen love of all things geeky a […]

All Aboard for Mars! A True Story