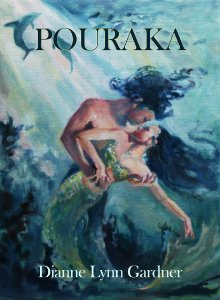 Dianne Lynne Gardner, who regularly blogs here about film, writing and the writing life, has a new novel – an “underwater romance” that is now up for nomination as a KIndle Scout entry.

Details are below.  Amazing Stories and Dianne would appreciate your support.

Read the first few chapters of (at the above link)

Cora’s loyalty is torn between her human friends and her lover, Tas who detests mankind for infringement on the sea mammals’ habitat. When Tas attempts to rescue the local dolphin pod from a gill net, he is captured. With the magic of Pouraka, Cora changes to human form and travels on foot to rescue him, risking her own enslavement. Time spent away from Pouraka leaves the cavern vulnerable and invaders threaten the existence of the mermaid clan until there is only one final hope for survival

All life comes to the same end whether on land or in the sea. Tas could accept that. It was not death that disturbed him. A mer’s passing oftentimes was graceful, as is the swaying of the ocean under a summer’s moon. If his mother had died naturally, he would have taken comfort in knowing she was fulfilling the final cycle of life.

But she didn’t die naturally.

Because of that, grief would adhere to him as mussels adhere to the pilings under the pier, skeletons of forgotten shapes crusting over remnants of a once-living creature.

Thus begins the story of Pouraka. From Nov 26 9 PM PST until Dec 27 Pouraka is available for nomination. If with your help Amazon publishes the book, you’ll received a complimentary Kindle ebook of Pouraka.

Less than two days to go: Mission Confidence is HIGH

Turritopsis Dohrnii A Tale of Immortality