This week we take a look at the top ten best robots of all time. The rules are simple. Each robot must have a unique name and identity. We will not include classes of robots like Cylons or Transformers. The entries can be real or fictional. As always, let me know who I left off in the comments section.

R2-D2 is the ultimate robot. The little robot from the Star Wars franchise has been a sidekick for two generations of Skywalkers (Anakin and Luke). He only seems to get better with each new film. No matter if you are stuck in a giant trash compactor, fighting hordes of clone troopers, or lining up for a shot on the Death Star R2 always manages to have exactly what you need. He is the Swiss Army Knife of robots. I can think of no one better to have by your side when trouble starts. 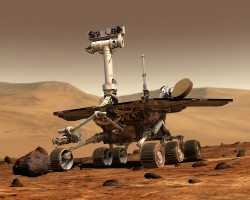 Opportunity is a Mars Exploration Rover built by NASA for exploring the surface of Mars. The robot first arrived on Mars in 2003 and in 2014 began searching for signs of ancient life on Mars. While a second robot named Spirit arrived on Mars in 2003, only Opportunity managed to survive. This real life robot is forging a path for humanity to one day live along robots on Mars.

Andrew Martin was created by the amazing Isaac Asimov in his story The Bicentennial Man. The robot begins as a basic servant, but his owners find that he contains great creativity within his positronic brain. Andrew Martin explores humanity as he slowly erases the boundaries between robot and human.

Marvin graced the pages of Douglas Adams’ popular science fiction novel The Hitchhiker’s Guide to the Galaxy. The underuse of his planet-sized brain caused poor Marvin to become bored and depressed. His humorous interactions with the characters in the story provided boundless entertainment.

Robot is a B-9 Class M-3 General Utility Non-Theorizing Environmental Control Robot who constantly warned Will Robinson of danger. Through many episodes of Lost in Space he proved his loyalty and usefulness. The Robinson family would never have survived without him.

C-3PO is easily one of the most famous robots in the world. He contrasts nicely with his counterpart R2-D2. While R2 is more strong, silent, and action oriented, C-3PO never stops talking and always wants to hide from trouble or wave the white flag of surrender. Despite his shortcomings, C-3PO remains the best translator in the business. His expertise in establishing the odds of an outcome for any situation have provided him a lifetime ban at every casino.

Bender is a wisecracking robot who always looks out for himself. He manages to frequently endanger his companions and always finds ways to sell them out. Despite his selfish nature, he comes through when he has to.

8) Data (Star Trek: The Next Generation)

Data lacks emotion where so many of the other robots in our list are filled with emotion. He explores his own nature during the many episodes of Star Trek: The Next Generation. He is wise and loyal and perhaps one of the most valuable officers in StarFleet.

Bumblebee is a robot killing machine who manages to be funny and likable while not actually speaking. When transformed to his robot form, he speaks with the use of a radio, changing stations to use sound bites to convey his message. Bumblebee transforms into a sporty car in the films, which enables his human companion to speed around the world fighting bad guys. Bumblebee is the kind of robot companion anyone would be glad to have.

Twiki was another robot with attitude. His attitude was more carefree and fun loving. Twiki provided the audience with a few laughs while helping Buck Rogers save the day.

On the history of selecting a seminal SF library; fanzine reviews

What if you knew you had only a handful of minutes left. What would you do?