This is one of my favorite movies because it is totally insane and it doesn’t care if it doesn’t make any sense. Much better than JAWS… 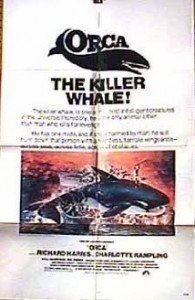 I watched ORCA (1977)  once again on the EPIX Channel the other night. This is one of my favorite movies because it is totally insane and it doesn’t care if it doesn’t make any sense. Much better than JAWS, another movie about a big killer fish– I mean water mammal– because it doesn’t pretend to be anything more than it is. It’s not a great movie. It will never go down in any of the official lists of “all time great films.” But the truth is this film, in its own way, is a classic.

Raymond Chandler once wrote: “Within its frame of reference, which is the only way it should be judged, a classic is a piece of writing which exhausts the possibilities of its form and can hardly be surpassed.”

ORCA, in case you’ve never seen it, is about a fisherman who accidentally kills a female whale and her unborn offspring in full view of the female’s mate. The enraged widower whale follows the fisherman’s boat to port and relentlessly sets about to kill the man who destroyed his family and anyone else who gets in his way.

The ORCA script was written by Luciano Vincenzoni, Sergio Donati, and Robert Towne. An impressive trio. Their other scripts include THE GOOD THE BAD AND THE UGLY, ONCE UPON A TIME IN THE WEST, and CHINATOWN. ORCA  fits Chandler’s definition of a classic in the sense that it exhausts the possibilities of its form by taking the concept of the pathetic fallacy to its ultimate extreme. In case you can’t remember back to your English Lit 101 class, the pathetic fallacy ascribes human traits to animals. You could not go any further with that idea than this script does. It can hardly be surpassed.

It’s a better film than JAWS, I think, because, for one thing, it gives the whale motivation. We know why ORCA wants to kill Richard Harris, who plays the unlucky fisherman. The motive is revenge pure and simple. What’s JAWS’ motivation? He’s just an eating machine. Pretty weak.

And then there’s the cast. Richard Harris plays his role as the fisherman so straight he should have gotten an Oscar just for keeping a smirk off his face. Nevertheless, he gives a first rate performance, reacting to the whale the way any guy in real life would react. “What are you saying? The whale wants revenge? Yeah, sure!.”  Other times he’s holding his head in his hands as if wondering “Why did I ever agree to do this flick? Where’s the nearest pub?” The Academy ought to give him a special posthumous ORCA OSCAR  for a performance above and beyond the call of duty He deserves something. All those other Brits, all his old drinking buddies, like Peter O’Toole, Richard Burton and Albert Finney all got awards, but not poor Richard.

In addition to Harris’ performance, the film boasts two of the most beautiful women of the seventies in the cast– Charlotte Rampling and Bo Derek. The soundtrack was composed and conducted by Italian Cinemas Grand Maestro Ennio Morricone. See what I mean about classic?

Now some critics complained that Dino DeLaurentis and his writers were basically ripping  off JAWS. Maybe, but there’s more to it than that. They obviously respected Stephen Spielberg’s film but they weren’t above sending it up either. The ORCA filmmakers definitely took a cheap shot at JAWS in the very first scene, in which a Killer Whale kills a big Great White Shark without breaking a sweat. Chomp-Chomp. Charlotte Rampling says, “Only a Killer Whale could do that.”