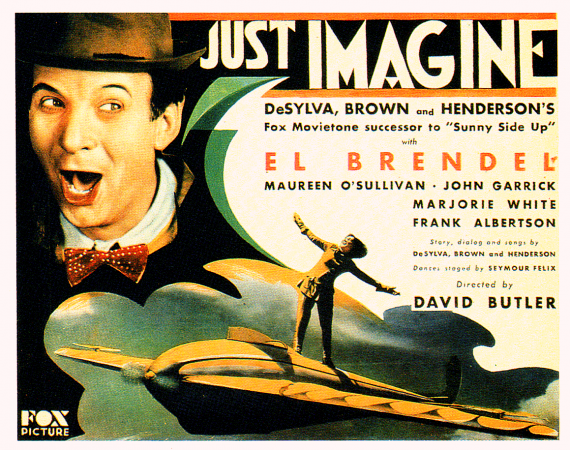 Just imagine there exists a 1930 film portraying the future world of 1980, a future where people no longer have names, but have numbers instead, like J21, LN18, etc. In this film, the state decrees who marries whom according to its assessment of the relative worth of the individuals. Consequently the plot revolves around true love forbidden by the state. Shades of 1984! Premonitions of 1984! And don’t forget, 1984 was written over 20 years later (though I doubt Orwell was inspired by the movie).

In the film a man is rejected by the state as a poor choice for a particular female, a stolid good citizen being preferred. At first the man contemplates suicide, but by a miracle is given a chance to prove himself first among equals by piloting the first rocket ship to Mars! There he discovers a bizarrely alien yet humanoid civilization! And just imagine the film making extravagant use of special effects, including an elaborate model of New York City which cost $250,000 to make (a fortune in 1930). Doesn’t it sound like a classic masterpiece of fantastic filmmaking? Wouldn’t you KILL to see it?

There IS such a film. It’s called JUST IMAGINE. 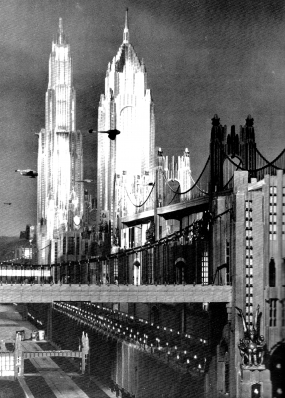 Okay, just imagine me settling down to watch a sophisticated (but grim) musical satire warning of the horrors of a future age of technological triumph, an intelligent American response to METROPOLIS, more realistic, yet enlivened with subtle humour…

Well, actually it’s a sequel of sorts to the hit 1929 musical SUNNYSIDE UP, except that JUST IMAGINE bombed at the box office.

Okay, just imagine me leaning forward to take in a film too sophisticated for its day, the intellectual thrill of a lifetime, a masterful film we worth all those decades I’ve waited to see…

Arrgh! Alas! Alack! Unfortunately it’s a mind-bogglingly inept paean to alcoholism, the last gasp of low IQ burlesque, and a truly annoying cacophony of conflicting musical styles. In short, the tears began cascading down my cheeks within nano-seconds of the film’s beginning. Tears of gratitude. Do you know how hard it is to find a wonderfully BAD film? This is the find of a life time! It’s excruciatingly awful! The perfect film! Thank God I lived long enough to see it!

How to describe it? Well, let’s start with the burlesque and the alcoholism.

The subplot has to do with an ‘ordinary’ man the contemporary audience is supposed to identify with (but only if they’re sub-morons). Having been struck dead by a golf ball in 1930, he’s brought back to life in 1980. The laboratory is quite beautiful, full of giant fluid-filled vacuum tubes, monstrous electronic gizmos and such, and the reanimation scene has a certain chilling mood to it.

The mad scientist responsible for bringing the poor fellow back to life did it only to prove it could be done; having done it, he has no further use for the subject. When the latter complains, the scientist replies, “Well, if you’re unhappy, we can always kill you again,” or words to that effect. The hero J21 (played by John Garrick) and his party-animal buddy RT42 decide to look after the 1930 goofball partly out of pity, but mainly for a lark. It seems people in 1980 are not big on altruism.

Anyway, Mr. 1930 is assigned the name ‘Single-0’ and the role of eternal-idiot-sidekick for the remainder of the film. Single-0 is played by a burlesque comedian by the name of EL BRENDEL (I kid you not) whose main claim to fame is his ‘happy drunk’ persona. In this future all food consists of pills, and all drink also. Single-0 rapidly acquires bottles of pills for every pocket, and remains forever after well and fairly soused. This is meant to be hilarious. Other characters are quite taken with drinking pills as well.

The numerous jokes hinging on references to THE VOLSTEAD ACT put everything in perspective. PROHIBITION began in 1920. It was still in effect in 1930, though to disastrous effect. Insurance companies revealed in 1930 that the death-by-alcoholism rate had increased 600% since prohibition had been introduced. This was a factor in the repeal of prohibition in 1932.

Point is the audience was full of law abiding non-drinkers who regularly drank themselves senseless on bootleg liquor. Yet, for some odd reason, they didn’t find El Brendel particularly funny. Maybe it had something to do with the crash of the Stock Market just a few months earlier. Eventually the Depression would drive people to seek escape in light, fluffy comedies, but the timing for JUST IMAGE was horribly wrong, and besides, it was evident to all that the jokes in the film were just plain stupid. 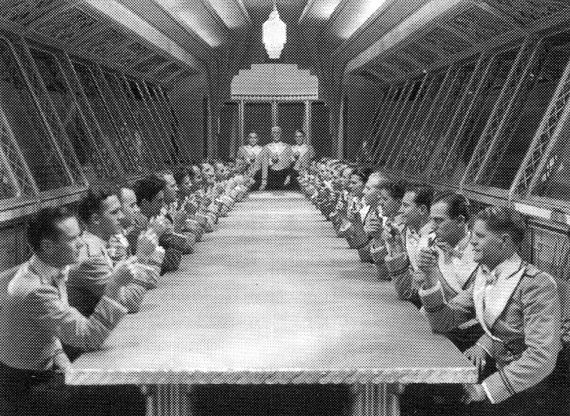 As for the music! On the one hand, you have sappy crooner-type ballads sung by male tenors (I hate this kind of song!), and on the other hand, a plethora of elaborate musical numbers reflecting the tail-end of the flapper era. Some of the latter aren’t too bad, but some are just weird, like the duet performed in a nightclub aboard a transatlantic dirigible, a song devoted to the sex life of flies! This “witty” ditty is sung by RT42 and the heroine’s female sidekick, played by Marjorie White, whose number I forget, but who does an excellent live imitation of the cartoon character Betty Boop. And there’s also a drinking song whose choreography will have your eyes bugging out like a Martian.

Speaking of Martians, there are two kingdoms on Mars, one ruled by Queen Lou Lou, the other by her evil twin Queen Boo Boo, which gives you an idea of the incredible depth of sophistication lurking in the script. In fact everybody on Mars has an evil twin, which makes for interesting wars between the two kingdoms, as no one seems to have any trouble in finding their doppelgangers in crowded battle scenes. Some interesting efforts are made to have the Martians – who are human in appearance – move in oddly stylistic ways, but the effect is peculiar.

Both Queens have identical side-kicks, Boko & Loko, played by a big, hairy fellow wearing a cloth bikini sprouting enormous metallic knobs, and a frizzed-up hair-piece with spikes. His first appearance before the Queen occasions the only good joke from El Brendel: “She’s not the Queen of Mars…. HE IS!” Nevertheless, Single-0 becomes quite taken with the pair of thugs, and kidnaps the evil one to take back to earth. Hmmm… 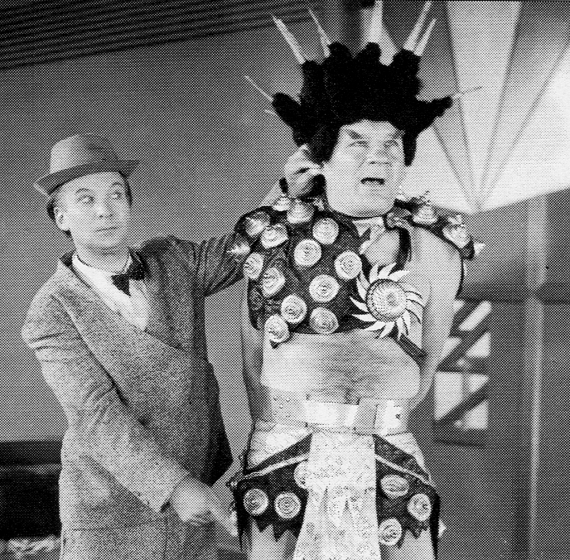 As for the futuristic technology exhibited in the film, much of it is quite charming. Everyone has their own aircraft of course, essentially cloth-covered monoplanes with propellers (but no visible engines). I particularly enjoyed the scene when a stream of such craft were halted by a floating traffic signal and J21 pulled alongside LN18 (Maureen O’Sullivan) to clamber nonchalantly from his cockpit on to her wing to chat her up.

Two-way television/phone hookups are a hoot, given that the user has to focus the screen every time, and what first swims into focus is a shot of the caller fiddling with the focus on HIS set. A foot-wide column of light springing ceiling-high from a tabletop is certainly the most unusual idea for a ‘doorbell’ I’ve ever come across. Air blowing hand dryers are prophetic, and it’s interesting to see automatic doors that whisk quietly aside on your approach which predate Star Trek’s Enterprise doors by over 3 decades.

Yet there is a curious lack of imagination evident in the takeoff of the Mars bound rocket ship. Looking very phallic (and virtually copied for the FLASH GORDON serial 6 years later – though the FLESH GORDON rocket ship is perhaps closer in design), the Mars ship leaps into the sky with lots of smoke and very little flame (fortunately for the heroine, who is standing 2 feet behind a rocket tube pounding on the hull yelling for J21 not to go. It’s a little surprising she’s not burned to a crisp). Most annoying of all, the space craft takes off to the sound of a child’s pinwheel rocket instead of the mighty thunder one would expect. 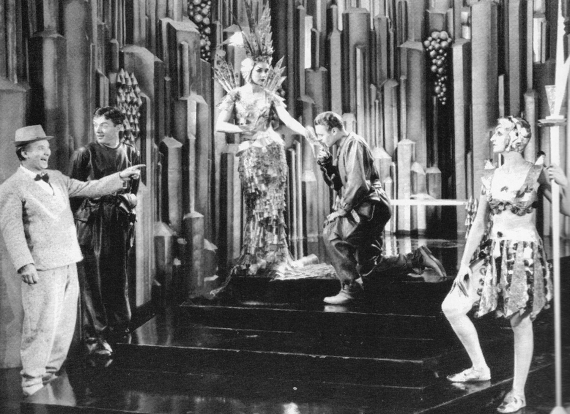 Most of the futuristic gimmicks are displayed for laughs early in the film, and once the heroes get to Mars all pretense at futurism is thrown aside for boffo yuks. Mars turns out to be a jolly expensive nightclub act more than anything else. (Not such a bad thing really.)

JUST IMAGINE gets full marks for guts. But its 1930 ‘zany’ adult humour, while staggeringly gobsmacking and mind-gibbling, just doesn’t cut it, even by the standards of the time. And its emphasis on the joys of out-and-out boozing is positively embarrassing. Still, you’ve GOT to see it. It IS amazing!

Beauty, the Eye of the Beholder and Miss Universe

a man expelled from the last habitable zone wanders the desert wondering if he’ll ever see his son again.