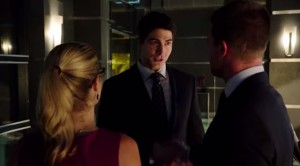 Ok, so I was planning to talk about The Flash, how I thought it was a good opening episode, but a little bit disappointed how it focused too much on a new audience, not really acknowledging those of us Arrow fans knowing what had already happened to Barry (I mean not even a glimpse of him and Felicity), but then bringing in Oliver Queen to say “oh look, a cross over show!”. I had my rant all planned, but equally, how I would talk about how I thought it actually has potential to be a hit despite this.

THEN, I watched the opening episode of Arrow the following day. OMG. Oliver is actually in love with Felicity, where did that come from, clearly we all knew that was one sided and he never really have those feelings away, we as an audience see more than his team, so if we didn’t really see it, how did they? Secondly, SUPERMAN, aka Brandon Routh has joined the show!!! Ok, so he isn’t Superman any more, but I was excited when he joined Chuck. He is still so much like Christopher Reeves (and I did actually love Routh’s Superman) that I can’t see him as anything but Superman doing a cameo.

This has totally knocked me for six. DC appears to be keeping its TV shows and films two separate entities, unlike Marvel. But this has just got me excited. The last season of Arrow lost me, I had a build up of episodes to watch, in fact I didn’t even realise but I missed the season finale first time round. But the opening season episode has me back in love with the show.

With The Flash having a good opener too, I just hope these two shows run alongside and keep up the cross over episodes.

The Greatest Science Fiction Novels of All Time Part 11

Vampire flicks have been all the rage since Twilight flooded the box office with sticky, coppery crimson in ’08, and have proven a solid moneymaking strategy ever since, with each of the saga’s four sequels averaging about three hundred million dollars per film, according to IMDB’s Box Office Mojo. But for some of us — […]

Europa Report And The Irreality Of Found Footage