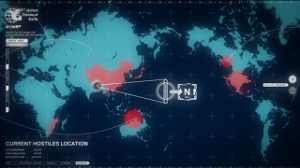 Aldnoah Zero #9 – As Marito, Rayet, and Saazbaum all reflect on the psychological damage the ongoing conflicts have caused them, we get a good look at the physical damage done by Heavens Fall. It’s worth taking a good slo-mo look at that map; there’s a boatload of exposition packed into it.

Finally a bit of the Tanegashima Incident is revealed: in a sudden, unexpected homage, Marito and Humeray found themselves face-to-face with a Martian tripod. Humeray’s death has at least been explained now, and Marito’s feelings of guilt… well, maybe. When he says the guy next to him in the simulation isn’t what’s bothering him, he might be in denial, or there might be worse to come.

Back in Vers territory, Saazbaum makes the parallels to Germany excruciatingly clear by expounding on the Martian cultural inferiority complex, and then explains that what he’s really trying to do is to fight The Man. If Emperor Ray is Kaiser Wilhelm, then Saazbaum’s bunch is no one in particular, actually, since the Kaiser survived the war to abdicate afterward.

But Saazbaum’s talk is crucial to explain what Rayet does next. If the goal her father was dedicated to wasn’t starting the war but rather eradicating the monarchy, then it makes perfect sense for her to seize the opportunity to do her part by garroting Asseylum. Rayet seems to have almost instantly regretted it, but it may be too late.

Relegating Inaho the Wonder Kid to a background character has turned this into a much better show. I wish this had happened a couple episodes sooner. 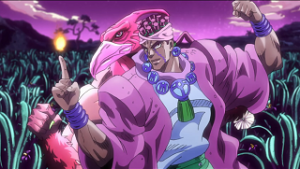 JoJo’s Bizarre Adventure: Stardust Crusaders #22 – He’s back, he’s back, he’s back! Yes, Avdol’s hasty offscreen burial was really a cover for getting him into a safe place to heal up, and now he’s ready for action again, with only a couple of scars and a sassier attitude to show for the experience. He handily dispatches Judgement (remember he’s already established as stronger than Polnareff, and is probably the second strongest one in the bunch after Jōtarō), and then Polnareff’s guilt trip is completed as it’s revealed that everyone else was already in on the joke. Leave it to Kakyōin to find a way to put it as diplomatically as possible.

It also turns out Avdol has been out doing a bit of shopping while pretending to be dead. I wonder if they’re just taking the submarine over to the seacoast, or have some kind of clever plan to try and sneak it up the Nile. 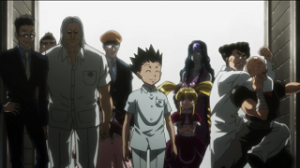 Hunter x Hunter #145 – And Gon’s back too, but not without reminders of the immense price he paid to defeat Neferpitou. Killua discovers at the last minute that Gon isn’t just injured, he’s aged immeasurably. The transformation that allowed him to age into his prime has now carried him forward to the end of his natural life. And then, when Nanika undoes it, the aether trembles with such power that absolutely everyone knows what’s happening.

So Gon is welcomed at Hunter HQ by a crowd which is elated (mostly– no idea what’s going on with Knuckle and Hanzo there) but not entirely surprised. One of the least surprised is Pariston, who, true to his nickname, has even figured out how this can help him win the election.

Did Ging say Pariston didn’t want to win? It seems to be too late now. With Gon healed, Leorio’s lost his motivation for running for chairman, which would seem to hand the election to Pariston.

That’s all for this week, I’m afraid! Terror in Resonance and Sailor Moon Crystal have both skipped a week for reasons unknown, but will be back next time.

A banner year for Black comics

All The Plans To Colonize Mars Including Terraforming It