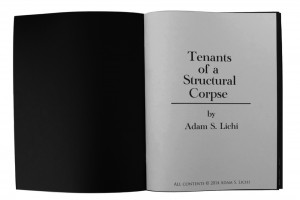 Its hot. Its summertime. Does he ever stop practicing? What’re they DOING in there? What is that breathing noise? These walls, they stink! If only it weren’t so hot!

Tenants Of A Structural Corpse is an experimental comic by Adam S. Lichi, somewhere between a single issue and a graphic novel. It tells the story of a regular day at your run of the mill rundown apartment complex. Or it SEEMS to, anyway, as Lichi leaves most of the telling up to your imagination. Tenants is entirely wordless.

Instead of dialogue, Lichi gives each apartment it’s own numbering system, from 1-A to 4-B, with 2 apartments per floor. We’ve all been in crummy apartments like this. The panels run from left to right, with each one being a separate apartment. This gives you a choice – do you read along, from left to right, and experience sort of a god’s head view of the entire apartment complex, or do you single out one particular story and follow it along, eager to find out what happens next? That’s just one of the intriguing aspects of Lichi’s work.

The tiny dramas unfold, as the cast of characters live out their mundane existence; completely sequestered, completely alone. There’s 1-A, contentedly sitting on the sofa. There’s 1-B, an Asian man in his underwear, practicing stand-up bass. 2-A’s getting high; 2-B’s trying to sleep. 3-A may be taking a shot, or his medication. He’s wearing glasses. 3-B is looking in the mirror. 4-A is entirely nude, in an almost vacant apartment, staring pensively out the window, while an overweight woman makes a dinner for one, in 4-B. Simple, everyday life. Nothing untoward. There is nothing, other than the high contrast black and white line-drawings, to label this as an ‘experimental’ or ‘horror’ comic. In fact, there’s nothing to label it at all. 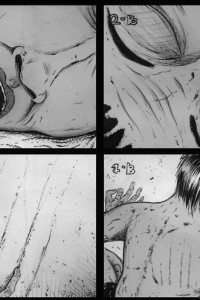 Tenants Of A Structural Corpse has no title of any kind on it’s cover – just a plain, flat, black, plastic folder style cover, and on the inside, simply the title and author name, in a sharp letterpress font that could be the cover for somebody’s grandmother’s funeral. There is no explanation of what is going on, only the numbers in the top left corner of each panel, to designate an apartment number. It’s easy to imagine someone flipping this black package open in some comic shop, getting sucked into the miniature psychodramas – all’s well, so far so good, and encountering a queasy, headachy feeling, when things start to go OFF, like a wheel of goat cheese left in the sun too long.

That is the key, the secret, to what makes Tenants Of A Strucutral Corpse so compelling, and so noteworthy, is it’s existence in a shadowy, uncanny limbo between horror and an older literary term, that has somewhat fallen out of usage – the irreal. Rather than focusing on mythic states and dream logic, like surrealism, irrealism is where dream logic T-bones waking reality. A lot of irrealism’s qualities have been absorbed into the field of magical realism – like Italo Calvino and Jorge Luis Borges and Haruki Murakami, and there are many similarities and overlaps between the two styles. Ultimately, i’d say irrealism’s main goal is to unsettle, while magical realism’s intentions seem altogether more altruistic, most of the time. Think of irrealism as the ear in the grass of David Lynch‘s Blue Velvet – it’s there to show you that the life you thought you knew, you don’t know. It’s the feeling of the ground slipping beneath your feet, as you fall down a new paradigm rabbit hole.

You cannot explicitly say that Tenants Of A Structural Corpse is technically a horror comic, which makes it so much more horrific. When you go into a horror movie, when you hear the tense strings and see the blood font flow, you steel yourself. You know what you’re in for, and are steeled against almost ANYthing, meaning only the most unexpected and over-the-top chills really penetrate all the way down to your core.

But irrealism is the velvet glove, rather than the iron fist. Take, for instance, the resident of 1-A, the smiling Ken doll sitting contentedly on the sofa, as a representative of the whole. Watch in amazement, as this fella first pushes himself flat against the wall, and then into the wall. The plaster gets soft, doughy, fleshy, and finally sucks our sharp-dressed protagonist into its essence. Without giving all the twisted thrills away, a similar fate lies in store for the rest of the building. 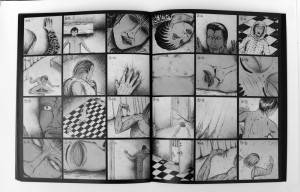 Lichi has really taken advantage of the comic medium, experimenting with the format, stretching and expanding it, seeing what is possible. He highlights the medium’s ability to be between visual art, story telling, and cinema. That is my favorite thing about Tenants, is that the panels get smaller and closer together, as the story unfolds, giving a sense of acceleration. It’s like scenes in a movie that are getting shorter and shorter, building towards a pyrotechnic climax. This comes to it’s glorious conclusion, in the last 4 pages, each an 8X8 grid. You can read across the floors, going from left to right, or you can follow individual story-lines, by reading from top to bottom. It really highlights Lichi’s structural strengths, and use of action and visual cues, rather than dialogue, to drive a story. It also means the story can be read again and again, in many different ways. It’s a cool artifact to have lying around, to flip open when you need some unsettling inspiration.

There are no fireworks in Tenants; not sure there’s even a whimper, let along a bang. Just seems like quiet, inconsequential lives that gradually…fade to nothing. I am of the opinion that Lichi is attempting to critique what many consider “normal life”, showing the insane neurosis that we all take for granted, have gotten used to.

Or maybe there’s no moral at all. Maybe this is no fable, instead just a random series of unsettling events. It’s own particular hell. This structural corpse could be a low rent building in the Twilight Zone, but trust us, it’s worth it to save up or get a co-signer, because this is NOT a nice place.

Full disclosure, Adam S. Lichi is part of the Bitstar constellation of artists with whom I frequently collaborate. A lot of folks say you can’t critique your friend’s artwork, but I find this to be quite the opposite. First of all, like many/most of my friends, artwork is how Lichi and I met and initially bonded, and our most common level of interaction. I’d see him sprawled out with his oversized paper, going to town at 6 in the morning. That was the first thing that struck me, getting to know him as a person, and as an artist. The main has work ethic! Serious dedication! He will draw for 14 hours, stopping only to eat tacos. Seeing how much work goes into a comic this size was an eye-opening experience, that gave me a renewed appreciation for the medium, and watching him work over the months made me look deeper into his work and what he was trying to say.

Lichi’s artwork is still somewhat flat and two dimensional, kind of scratchy and pictorial, I’d like to see him get deeper, more realistic. His pictures are like representations of people, rather than “real life”, not that one’s better than the other. He’s cleaned up and cleared out his style a ton since his first comic series Sick Liquid, and it’s thrilling to watch him get more minimalist, as he refines his toolkit.

Which you will have an opportunity to do. Tenants Of A Structural Corpse is the first of a series of publications for Lichi’s Young Mutant imprint, where he’s already got another handbound expanding comic experiment. From what I heard, he was planning on having consistent black covers for the duration, and should look magnficent together.

These comics are made with love and an absurd level of dedication. They deserve the same amount of attention. The fact that Lichi is so dedicated towards exploring the weird and the uncomfortable makes him a true ally of horror, and a talent to watch.

Get A Copy, while they’re still available: Young Mutant

If it hasn’t been made immensely clear: I adore comics.  As an artistic expression, a narrative medium, and physical object I can hold in my hands – shifting and sliding the all-too thin pages with my unfortunately greasy fingers – there’s an untenable magic to it.  I love comics and sometimes I download them. […]