Home Film/Televison The Edge of Tomorrow Maxes Out Today

A new Tommy Cruise sci-fi actioner is shaking cinema walls this summer; same as it ever-was. In this year’s iteration, however, we sit down to The Edge of Tomorrow. And, shockingly, regardless of the expectations set by posters and trailers and e-meter readouts, this film is something you never dreamed possible.

It is actually good; perhaps Cruise’s most entertaining movie since Risky Business. 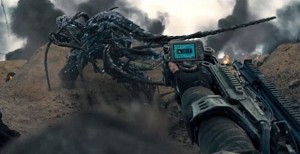 I suppose if you make the same film over and over and over again, after enough practice, or simply through the law of percentages, one will eventually turn out triumphant.

The Edge of Tomorrow is based on Harushi Sakurazaka’s novel, All You Need is Kill — a title that’s infinitely better, although also meaningless. The film version, through the efforts of a million monkeys and slightly fewer screenwriters, tells the story of a craven media spokesman, Major William Cage (Cruise), who gets rewarded for his insubordination with a one-way ticket to the front lines of alien armageddon. Bad karma, that, for these electric-dreadlocked, Spirographed, dustbunnies from space are seriously unpleasant. They’ve taken over Western Europe and can’t be stopped — except once, recently in Verdun, by Rita Vrataski (Emily Blunt) who bagged 100 ‘Mimics’ and gave the remnants of humanity hope.

Cage can’t escape his slot in the invasion force, getting bundled off with the grunts commanded by Master Sergeant Farell (Bill Paxton). During the catastrophic battle, however, something otherworldly happens to Cage. As a result he, Groundhog Day-style, relives the day of carnage over and over again, his consciousness resetting each time his brain off-gases. Together with Vrataski, Cage must understand what has/is/will happen to him and, somehow, defeat the indefatigable Mimics. 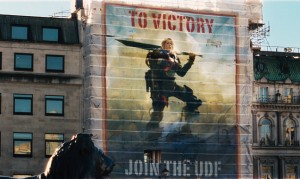 After years of summer films that compete — in the style of razor blade manufacturers — to fit more heroes and more villains and more lubricating strips into each overpriced, disposable blade — which is, by design, only good for a few weeks after which you’ll need to invest in another — The Edge of Tomorrow stumbles onto the path to victory. 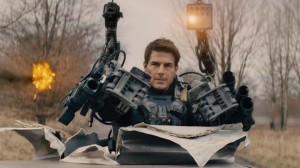 It is amazing how satisfying that feels. How something so uncluttered can elate you after you’ve become inured to over-sugared weak tea.

The conceit of this film — rolling repetitively through the same day — is more Source Code than Groundhog Day, but in terms of how much sense it makes, it falls somewhere between the two. Fuzzy logic is easily whisked under the pile of Cage/Cruise corpses for the most part. What’s missing is the emotional resonance Bill Murray gave Phil Conners. As that character’s understanding of his predicament evolved, he pushed through denial, anger, fear, and then growth. Time didn’t pass; it crushed. Cruise’s Cage gets a nod or two towards this stuff, but not enough to slow the film down or make you think much.

Thinking much, you’d wonder how Cage survives so long without a day off. He must fight the same battle every day for years. Why doesn’t he crack up? Why doesn’t he insist on taking just one day of battle off asleep in the corner? Why, you might also inquire, do the aliens in so many other summer films look so homogenous when compared to the Mimics? Why, as well, do we get so many superhero films when it’s possible to make something otherwise more engaging and entertaining?

Doug Liman, director, makes amends here for Jumper, his last sci-fi effort and a real stinker. He also spits squarely in the eye of Marvel Studios, intentionally or not. ‘Take your megafranchise and file it,’ is what this film coughs into its fist. Good luck with Ant Man. Keep trying. Maybe one day you’ll get it right. The only trick will be to go back in time and keep all your mediocre efforts from being released in the first place.

The Edge of Tomorrow is this season’s Aliens, if not quite as exhilarating or taut. It is a sci-fi action film that hits you in the adrenal gland, doesn’t shy from gallows humor, and keeps the Hollywood crap to a minimum. The ending is hokey, but one can’t hope for too much these days. The Edge of Tomorrow is also likely the best experience you will ever have watching someone else play a video game.

Take note, George Lucas. This is how you blend the formats without alienating your audience. Liman may lean a little heavily on shadow and quick camera moves to mask effects, but slack can be cut. He’s managed to get one through the gauntlet. The Edge of Tomorrow maxes out today. It is a big, studio, summer film starring Tom Cruise that you’ll actually want to watch again.

This review and examples other mind-flogging film blogging can be found on Stand By For Mind Control. Editors Zack Kushner (aka the Evil Genius) and Sean McPharlin (the Supreme Being) are thrilled to contribute their stimulating discussions of genre cinema to Amazing Stories.