Review of the new show, Salem. Be on the lookout for familiar faces! 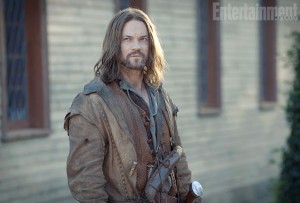 Just when you thought there weren’t enough witches on our screens along comes Salem—back to the classic tales of witches in early America. Perhaps this show can do what The Secret Circle couldn’t. Taking the style of The Vampire Diaries and True Blood and focusing purely on witches.

This new show is more like True Blood than the teen vampire show. Although a lower budget show, I think it has potential. There’s a great cast of familiar faces including Shane West (League of Extraordinary Gentlemen), Janet Montgomery (Black Swan), Ashley Madekwe (Revenge), Seth Gabel (Arrow) and Iddo Goldberg (Secret Diary of a Call Girl). Not something I’ve noticed of recent pilots.There is the odd familiar face, but usually a lot of relatively unknowns. Unless I’m just spotting all the Brits! Now I know one in four pilots have a British actor in them, and occasionally there are some more than one. But of these five cast members I’ve highlighted, three of them are British, and, despite this being set in Salem during the 1600s, one of the witches has an English accent and everyone else doesn’t. Not quite sure why that is.

From the first episode, I can see this has potential. I watched it late on a Tuesday night on my own—I don’t recommend that. I’m going to have nightmares about someone with a pig’s head—it’s American Horror Story all over again! But, if you like witches, a bit of magic, horror and some nudity, then this is for you. However, imps and sucking on privy parts is all too familiar of my high school drama exam and the speech I had to make as a confessed witch in the play Vinegar Tom. I struggled to remember lines, my short term memory isn’t great, but my long term memory is and unfortunately almost 15 years on that speech is still engrained in my head!

The Artful Collector: On Living (and Dying) with “Knick-knacks”

When Rod Serling wrote The Mighty Casey for The Twilight Zone, he created an ideal example of some of the most important elements necessary for writing a successful short story.