Home Fantasy From Tribute to Mount Doom, A Lesson in Survival Skills. 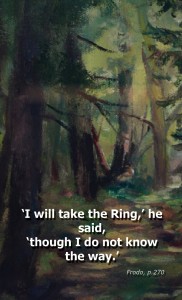